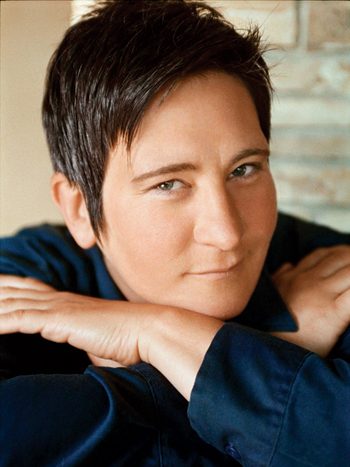 I notice k.d. lang is just about my size, perhaps a bit more broad-shouldered and with a very handsome, square jaw line. But all and all, we are just two dykes with short, dark hair. We both stand 5 feet 8 inches or so. We’re in jeans and sweatshirts. Her hair is perfect. Mine is not. I have 40 minutes.

Lang is in New York City at NoneSuch (her record label) in the Warner Brothers Music building in East Midtown. She launched her new CD, Watershed, in the U.S. in early February, and kicked off her world tour by headlining onboard shows for Olivia Cruises’ 35th anniversary in January.

Many of the concerts on her 2008 tour are already sold out, and the single “I Dream of Spring” has been released on Australian television.

Curve got lang to open up about her life, her loves and her pursuit of happiness. She’s very composed, pensive and … well, zen. I would have said brooding, but that’s the lang of the past. Today, she is bright, cheerful and “on.”

Is she, in fact, happy? Yes, definitely. Both within herself and with her partner of six years, Jamie Price. Both are Buddhists who live clean lives, which means being vegetarian, working out, practicing daily meditation and cultivating a coveted private existence in Los Angeles, where media coverage can often be blinding. Today, lang has carved out a sacred personal life, which she and Price have studiously and deliberately protected.

However, this wasn’t always so. Winning several Grammys shot lang into superstardom. She found herself in the Los Angeles limelight, living the Hollywood lifestyle she had earned, along with fame and fortune, after putting 20 years of effort into her music. Dazzled, she partied with Hollywood’s elite.

“L.A. is intriguing,” she says. “It’s like dabbling in a substance. L.A. is definitely the material side of life. It’s all about impressions, and it moves really fast. It does not feed anything, but seems much like a sugar burn. It’s not sustaining or fulfilling for me.”

Her CD All You Can Eat was about the incredible celebrity machine that is Los Angeles, and how that machine can make or break a career—or a person. “I’ve had my 15 minutes, now I don’t participate in that world. I’m more focused on my music, Buddhism, family, motorcycles and dogs,” but not necessarily in that order, she emphasizes.

Lang’s 40s have been her own personal watershed. Now 46, she points out that she has been with Price (a nonpracticing attorney who volunteers full-time for the nonprofit Tools for Peace) for six years. The organization is an arts program for the young based on the symbolism of the Tibetan Shi-Tro mandala. It is dedicated to teaching compassion for others and gaining natural wisdom.

Lang and Price met at an event given by their Buddhist teacher, Lama Gyatso, who leads Tools for Peace. And, for the first time in her life, lang has been monogamous. She no longer has a girl in every port. “Jamie wouldn’t stand for that,” she says, grinning that famous, sexy, dimpled grin. The two seem to have settled into a comfortable routine and lang jokes that they secure their privacy, even in the hills of Los Angeles, by “keeping to the northern part, the Valley, rather than on the Hollywood side.”

Lang’s gearing up to tour, and she admits she lives a very monastic life even on the road: She doesn’t like to socialize or even be around lots of people when she’s touring. “I need to conserve my energy. I basically start preparing for the show when I wake up. I eat healthy, I work out and I meditate before each show so that I can not only give the best performance, but also get the most out of it for myself and enjoy it.”

Does Price tour with her? lang says that unless there are a slew of museums for Price to visit, or some other spectacular events, the two are really apart for the duration. “The re-entry to home life is particularly hard, and then going out to tour again is even harder. I mean, just getting back into the routine of things you do at home that you cannot do in a hotel room is a real effort.”

Lang says she has come to a place of peace with her past through reflection—about her relationship to herself, to the arts, to former lovers and to the world around her. “I’ve been delving deep into my own thoughts about my choices and interactions in the world, my relationships in general, and I find that I’m not finished there. Change is hard, but I find it is very necessary. Writing, producing and recording Watershed at this point in my life is about facing my own habitual patterns and fears, sitting down and sifting out the difficult stuff .”

Lang suddenly gets very serious. “It all seems ominous on the one hand, while emancipating on the other.” She says staying in a relationship, experiencing new emotions rather than shutting down, is also a challenge. “But it’s what’s right for the relationship. It’s different, not something I’ve practiced before. It’s good for me.”

Watershed is also new for lang in many ways: Although she wrote and recorded with her crew of usual suspects, she is taking an entirely new band on the road with her. “My regular guys are in such demand, I can’t hold them back from playing for other singers. Plus, I’ve gathered some really great young talent that I am excited about and confident that the tour will be spectacular.”

Lang also produced Watershed, a first for her, and wrote or co-wrote all the songs, which are quietly beautiful, incredibly intense and very subdued—a real departure from the belting, big-voice vocals she’s been known for during most of her career.

On this CD, lang shares intimate, understated and often extremely sexy vocal moments. Watershed was six years in the making, and, with remarkable instrumentalism to back her up, she actually did a few of the cuts on the first take, in her kitchen. “For example, the vocal on ‘Shadow and the Frame,’ ” she explains, “that’s the first time I sang it. I tried to capture the most real, the most honest performance to me. In a lot of cases, it was the very first one.”

After she came out publicly in 1992, lang says, for a good 10 to 15 years all the media and fan focus was on her sexuality. “Now, the focus is shifting back to my music. I think that is fueling [interest from] the LGBT community more and more, and, in turn, it lets me embrace the community on a more natural level, and I’m really excited about that. I think the gay community has grown up and evolved. There’s a new driver and vehicle to explore and a wider spectrum of existence not focused only on coming out—it’s a more expansive culture that is accepting of transgendered people, bisexuals and others. Remember when we used to hate the bisexuals?” She laughs the laugh of a wizened elder of the queer community. “I think society is more open about sexual orientation in general. Look at Larry Craig or the whole Catholic Church scandal. It’s not all black and white anymore; even in the gay and lesbian community there is a spectrum. And that’s very heartening.”

Shifting gears a bit, I tell lang I think Joaquin Phoenix could play her in a biopic. She gets into that. “Really? I think he’s totally awesome, really sexy. I also think Brandi Carlile could play me,” she puts forth, “or some really cute boy.”

Where does she plan to end up? “I want to stay around as long as Tony,” she states. lang is referring to Tony Bennett, with whom she recorded the Grammy-winning duet album The Great American Songbook. “Tony is the kind of friend everyone dreams of. Or at least that I dream of. I revere our friendship and my friendships with other elders. I see Tony as a mentor. He loves to talk—politics, art, culture … and that enriches me as a person, to have the proximity to someone like that who has the life-wisdom he does.”

Another elder with whom lang was very close is the late Minnie Pearl. “We’re both Scorpios, she was just like me. I had a big crush on her—she was a really smart and beautiful person… and I think she had a crush on me, too,” lang says, sotto voice, smiling again, sultry and impish, and blushing a bit. “I think that part of our society is a tremendous void—the treatment of our elders. We live in such a youth-oriented culture, and we are missing so much wisdom by not cultivating relationships with older people, and by not bridging generations through knowledge and the access that binds traditional culture with contemporary culture.”

For example, lang says her mother is “the world to me. I love being around her. She is a blueprint for growing older. She continues to be productive and expand her heart and mind.” We get the two-minute warning from lang’s publicist and I ask one last question—boxers or briefs? Lang laughs a hearty laugh and breaks form. “Boxers, of course.”

When it’s time to leave, lang shakes my hand, admonishing, “Make sure you wrap up, it’s really cold out.” I tell her I’m from the Midwest and don’t think New York City ever gets too cold. “I must have lost my Canadian then,” lang smiles casually, “ ’cause I think it’s really cold.” I walk out of the giant skyscraper alone—it’s blustery after all—and disappear into the crowd on the anonymous streets of New York City.