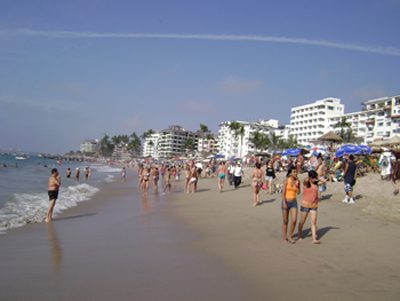 Last year Curve got the goods on Vallarta Heat, the newest lesbian week on the block. This year promises to be even hotter.

“¿Dónde están las mujeres?” (“Where are the women?”) was my first question when I stepped into Frida’s Bar in Puerto Vallarta last February, having just arrived for the first annual Vallarta Heat—the women’s week in Puerto Vallarta, Mexico. “Es una buena pregunta,” (“Good question”) Blanca, the bartender, responded. Definitely not the answer I had hoped for.

Vallarta Heat was born through a combination of efforts. Shannon McDonough and Emily Sanford—two Toronto performers and writers—noticed other lesbians on their travels to this city. “Lesbians come to Vallarta,” Emily explained. “We wanted to get them all here at the same time, doing the same things.” Shannon approached Steve Buczek, a Toronto promoter and the creator of Beef Dip—a similar week for Bears. Gay travel specialist Conxity.com became a sponsor. And on Feb. 23, 2008 Emily Sanford, Michelle Smith (our hosts) and Buczek were sitting on the beach at the Blue Chairs Resort by the Sea to welcome us for the inaugural week.

I was not sure what to expect. As a single queer woman, my hope was to enjoy a week in the company of women from different places, explore Puerto Vallarta and its lesbian scene, meet local women, flirt a little and practice my Spanish. I guess five out of six isn’t bad. For seven days and nights a total of 56 women from Canada, the United States, Chile and Mexico, and a couple of Canadian expats laughed, danced, talked, made out, drank and enjoyed Vallarta Heat.

Puerto Vallarta is a city on the Pacific Coast of Mexico with a population of 350,000 people. Beyond the hotel strip near the airport, the Rio Cuale divides the city into Old and New Vallarta. Also known as the Zona Romantica, Old Vallarta is home to gay-owned and gay-friendly hotels and clubs. It’s been a favorite destination of gay men for about a decade.

New Vallarta has a swanky walkway along the shore, complete with amazing statues every few hundred yards—a hint at the many galleries in Puerto Vallarta. Always busy and well lit at night, the boardwalk is the break between the wilds of the ocean and the high-end shops, restaurants and clubs on the other side of the street.

Old Vallarta, on the other hand, is more “real”; the landscape is punctuated by taco stands that became my daily haunts. In Old Vallarta, happy hours abound—two-for-one margaritas start at 45 pesos ($3.34). Los Muertos Beach begins after the pier. On it are a few hotels, including the Blue Chairs, a gay and lesbian resort, and its unofficially gay section of the beach.

In both parts of the city, most buildings are white, with red clay roofs and wrought-iron balconies. The streets are paved with cobblestones. Although the beach has an 11 p.m. curfew, it’s safe to walk around at night or along the walkway to see the stars and hear the waves crashing onto the shore.

A little island at the western tip of the Rio Cuale boasts local artisans and a few restaurants that are sheltered from the rest of the city by the large trees along the riverbanks. The River Café and Le Bistro have live music, and are both perfect for a romantic dinner.

“Younger generations enjoy a level of freedom, integration and access to a certain level of income,” says Deb Parent of Conxity.com. She adds that Puerto Vallarta, with its established gay scene, proximity, affordability and climate make it the perfect location for travel and for a women’s event. “It’s probably the gayest destination in the sun,” she says.

Vallarta Heat was a relaxed mix of planned events and free time, couples and singles. Some of us purchased Dog Tags for entry into all the events, others chose the events they wanted to participate in. Circuit party it was not, although clubbing was definitely on the menu. Club Mañana (290 Venustiano Carranza) saw us three times: the first night, mid-week for the Juicy dance and for Moist—the grand finale on Saturday night. Toronto DJ TK’s energizing house set took a mixed crowd through until the wee hours of Sunday morning. The Abbey Hotel hosted a private pool party for us one afternoon. Beach balls flew and water bubbled in the hot tub to the sounds of local DJ Giaco and TK. We brought the house down with some mean karaoke at DeWayne’s Oasis. And the beach curfew was extended for a starlight beach party at the Blue Chairs, complete with the soft glow of tikki torches to kiss to.

We also got out of the city. Some of us nature babes traded the ATV jungle and tequila factory tour (woo hoo!) for a more eco-friendly adventure. Sylvie Scopazzo (a lesbian from B.C.) is the general manager of Los Veranos Canopy Tours. She was out partying with us and invited us to try her zip-line. Speeding 400-plus yards above the river through the forests of the Sierra Madre Mountains was one of the best things I’ve ever done. Friday we enjoyed a booze-cruise hosted by Puerto Vallarta’s “gay mayor,” Diana DeCoste. Originally from Montreal, Quebec, DeCoste has been operating gay cruises for approximately nine years, complete with snorkeling, a secluded beach and lunch.

This year I’ll know where the women are. And if last year’s enthusiasm is any indication, look out, boys—the last week of February will be a little hotter in Puerto Vallarta from now on.