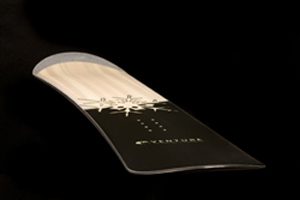 Let’s face it, snowboarding is cooler than skiing. It’s not necessarily better, but it is younger and hipper and, that being said, it is no longer acceptable to wear your momma’s crinkled nylon puffy jacket on the slopes. But where do you turn to find cool snowboarding gear made for a woman that you would actually wear? Most companies make gear for girls, but it is obviously designed by a guy—the pink beanie that says “grrrlboarder” on it or the flowered jacket with a fake fur hood. This is not the gear of a real athlete; this is the gear of a wannabe. And you aint no wannabe. So here are some suggestions for woman-designed clothes that will fit your body, your style and your identity.

Nikita
This company has the best style to function ratio. Started by Heida Birgisdottir of Iceland, Nikita is all about being the hot, tough girl on the slopes. They’re gear is fit for a woman, but there’s

nothing girly about it. With early ’90s skate-inspired designs and colors, Nikita’s 08-09 line will be sure to get the looks in the lift line and most importantly, let you pull all those kick-ass aerials in the park. Nikita gets world-class designers (often women) each season, so wearing a Nikita hoodie is like wearing a piece of art.

Betty Rides
This Portland-based company has a unique concept—the entire line is designed by a group of girls who work in a house together (read: sorority). While Betty Rides has some of the aforementioned fake fur hoods, the line also includes some interesting mix and match gear. Their pants are tight, but flexible. If you want to maintain the urban hipster look on the slopes, Betty Rides will help you achieve your goal.

When it comes to snowboarding hard goods, the ethics are less about feminism and more about environmentalism. Typical snowboards are made from fiberglass and bound together with a mixture of toxic glues. While most companies are still using the old, harmful model of manufacturing, there are a few companies that have made the leap to eco-boards. Here are two companies that stand out for their commitment to performance and the environment.

Arbor
this company was green before green was winning Oscars. Since 1995, Arbor has created high-quality boards made of sustainably-harvested woods like Koa and bamboo. These are some of the most beautiful and best performing boards on the mountain. Last year, Arbor donated 5 percent of their total profits to the Nature Conservatory to replenish trees in Hawaii. This is a company worth supporting and a board worth riding.

Venture
Based in Silverton, Colo., Venture goes beyond just using sustainable materials for their boards by incorporating green practice into the entire operation. Their production plant is wind-powered and they have a comprehensive recycling program to collect scraps and melt them down for use in future projects. Every Venture board comes in three widths, so women have plenty of options for high-performance, low density rides.