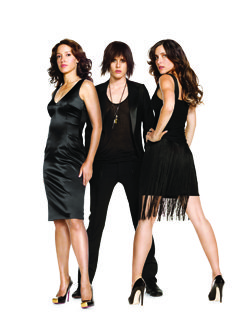 For six years the women of Showtime’s hit series have proven lesbian life isn’t all about flannel shirts and granola.

I can still remember the first time I watched Showtime’s hit drama The L Word. It was exciting, sexy and—most of all—familiar.

I was instantly hooked because, foxy ladies aside, it was the first time a television series had actually reflected my life, my friends and my experiences (OK, it was a much flashier and more alluring version of all that, like a lezzie funhouse mirror that turns your flannel into Chanel). For five seasons, I’ve watched these characters’ lives unfold, tuning in to see them change and grow, fight and make up and, in Shane’s case, embark on a campaign of total female heart annihilation.

This month, Showtime will begin to air the series’ sixth and final chapter. What better time to reflect on how The L Word has changed the lesbian lexicon—and who better to ask than the ladies who bring the stories to life each week? We spoke with Jennifer Beals, Laurel Holloman, Katherine Moennig and Rachel Shelley—or, as they are known to fans, Bette, Tina, Shane and Helena, respectively—about what it was like to work on the iconic show, what we can expect from season six and what’s next for them. Oh, and whether fans can hope for an L Word movie.

Before the show premiered in 2004, lesbian characters in leading roles on television were scarce. When it first aired, The L Word was a revelation, with its depiction of a group of friends who were glamorous, beautiful, successful and gay.

“It [took] away the whole perception that everyone has to have flannel shirts on and jeans and boots…we [portrayed] a lot of different types of characters,” recalls Laurel Holloman, the woman who brought Tina to life and became TiBette (so named for her on-screen partnership with Jennifer Beals’ Bette). “I think it changed a lot of people’s perceptions.”

More importantly, the popularity of The L Word meant greater visibility for the lesbian community.

“Between all of the viewings people had in their homes, and conversations that went online, to the creation of OurChart…I think it’s been truly instrumental in creating community, and in creating pride and representation,” adds Beals.

And at a time when the validity of lesbian relationships is being called into question in state courts, co-star Rachel Shelley underscores the importance of Bette and Tina’s relationship, especially because the characters are so easy to relate to. “Most people see [them] as a couple who are just like any other couple with problems,” she says. “It’s always the way that any kind of bigotry or prejudice has been broken down, by changing the stereotype and informing people of a reality.”

Beals agrees. “It’s about familiarity, and I think the only reason they’re uncomfortable with the notion of same-sex marriages is because they haven’t come into contact with gay and lesbian couples enough to understand that it’s about love—and that it is a civil right,” says Beals.

But with the show ending this year, the question remains: How lasting will the effects of The L Word be?

“I think the truth will come when it’s off the air,” says Beals. For her, the impetus rests with the storytellers. “I’m hoping it has changed writers who are willing to write these stories…[and] empower other people to tell their stories and know that there will be people who will listen.”

What story would Beals like to see, post-L Word? “I would love to see a sitcom with two married lesbians and their adventures with their children and their straight, Republican next-door neighbors. I think it would be fun…in a Three’s Company kind of way.”

The end of the acclaimed series will also be the end of a personal journey for the actors. Before working on The L Word, Beals says she “didn’t really see the gay community that much, in terms of issues. I didn’t think about same-sex marriage. I didn’t really know who Matthew Shephard was. I’d heard the story, but it really didn’t sink in, really what it meant…the extent to which hate is codified within the culture. It’s not until having worked on the show that I realized that there are so many things to get done.”

For Holloman, the openly bisexual castmate who was already popular for her lesbian role in the film The Incredibly True Adventures of Two Girls in Love, working on the set was eye-opening. “I thought I knew a lot about this community of women [but] I didn’t know that much at all. I have learned so much from the different writers and directors that came in. For me, it was just a whole new learning experience. It was important to kind of say, ‘Wait, there is so much for me to learn about the dynamics of these relationships.’”

For some of the cast, it’s hard to say goodbye to their character. Beals describes some of the perks of being Bette: “There are times when I’m in an argument with somebody that I really wish [Bette] would just pop up and argue for me. I really, really do. It’s like, ‘Where is she? Come back!’ Instead of me going, ‘Uh, um, ee, oo.’ I’ll miss, certainly, her articulateness—and her wardrobe.”

For others, it may be easier to bid their alter egos adieu. “I think it’s possibly time that I shed that skin…you can’t go on being the same thing forever,” said Moennig. “I personally wouldn’t feel satisfied doing that for the rest of my life. It’s time to shed that one; appreciate it, own it, but to shed it.”

Not a surprising perspective from Moennig, who was only 24 when she shot to fame on the series. “I really think I came into my own on this show, just because going through your 20s is such a heavy decade.”

But that doesn’t mean the final hurrah will be simple. Like the audience that’s awaiting this sixth and final season, the cast feels both excitement and sadness.

“I felt like we had accomplished so much. I think that if we hadn’t so thoroughly told so many stories that I would have been sad and I would have been disappointed. But because we covered so much ground…I just felt tremendously proud and elated,” says Beals.

“It’s sad to let go of six years of your life. But everything has to come to an end eventually. And now I think is as good a time as any to move on,” says Moennig.

For Holloman, the hardest part is leaving behind the cast and crew. “I felt really sad…like I was just leaving a core group of people who had become family to me, at least six months out of every year.”

Despite their conflicted feelings about the series coming to an end, all the ladies are satisfied with the conclusion. “I feel like you leave Helena, on a personal level, in a good place, with some things resolved and a future ahead of her…which is how you want to leave a character,” says Shelley.

“I’m really happy with it. I think my character ended up in this really, really great place,” says Holloman. Perhaps of all the characters, Holloman’s was able to play the greatest range. Was she always happy with the storyline?

“Every once in a while I think there were these really magical storylines…I would really connect with, and I would like to have seen them go on a little more.

“To be completely honest, there were some episodes, and I am sure the audience wouldn’t want to hear this, but as an artist I look and I’m like, ‘It would have maybe been better if less people had their clothes off and not everyone was fucking in that episode, and concentrated on the story a little more.’ But God, I can say that now. I hope I don’t get in trouble for it, but I feel I wasn’t the only one that felt that. And I love that our show was sexy and I loved that it was about sex in so many ways, but there were just some times where I think if we had pulled back on certain things…we could have won awards, and I think that gets in the way. But, you know, fuck American television for being so conservative. It was a complicated balance, let’s put it that way.”

While the ladies were tight-lipped on spoilers, fans already know there is a heightened focus on the core group of women who began this journey together five seasons ago. There’s also a sense of fun and hilarity, something we saw hints of last year.

“I think I laugh more in this season than I have in every season combined. It was so nice,” says Beals.

Holloman, too, hints at the fun: “There’s an amazing episode where there is lots of dancing.”

“I just want to say, here and now: Make sure that you are in your seat before the [opening] credits roll. Whatever you think of the title song,” Shelley adds, laughing.

So what’s next for the ladies of The L Word?

For Beals, acting will continue to support her gay rights activism. “Because of the show, I’m in a position to use that visibility to be helpful. But seeing the failure [to defeat] Proposition 8, you know there is certainly a whole lot more to be done. And I am really concerned about the vacuum that is now on series television in terms of lesbian stories, gay and lesbian stories, and I’m just praying that somebody comes up with something good,” she says.

Both Shelley and Moennig are headed to the big screen but in separate projects. Shelley’s British film, The Children, came out last month. “I play a mother whose kids are actually around,” Shelley says, laughing. “It’s kind of a thriller that turns into a bit of a horror.”

Moennig is in a film called Everybody’s Fine, which will come out this year. “We’ll see how that goes,” she says. And what else does she have planned? “It kind of just depends what comes my way.”

Holloman, on the other hand, is just looking forward to some down time with her family. “I have a 7-month-old at home and my 4-year-old daughter. So I wouldn’t mind just sitting back until the new year.”

And, of course, there is always the not-so-secret untitled spin-off, in which Leisha Hailey will reprise her role as Alice Pieszecki. I asked the ladies if there was any chance of a visit from familiar faces.

“You know, no one’s asked me. But I’m sure Leisha will be great,” says Beals. “She’s so talented and just so wonderful to watch, and a lovely person…all blessings to her and I hope it goes really well.”

With the Hollywood success of Sex and the City, fans of The L Word can’t help but wonder about the possibility of seeing their favorite Sapphic starlets reunited for a feature film treatment of the beloved series.

According to Moennig, there have been “grumblings” on the subject. And it appears that the cast is amenable to the prospect.

“I think there could be a great movie made about [The] L Word,” says Shelley.

“That would be such a great reunion,” agrees Moennig. “I would never turn my nose up at that. It would be too much fun.”

Holloman also agrees. “I really would love to see us do a movie. Sex and the City…did really well. We’re a very different type of show, but we are a strong show and a strong group of women, and I think there is a market there. And I know that [producer Ilene Chaiken] has more stories to tell.”

You can bet your collection of unfortunate knock-off Papi hats that I’ll be the first in line for those movie tickets.