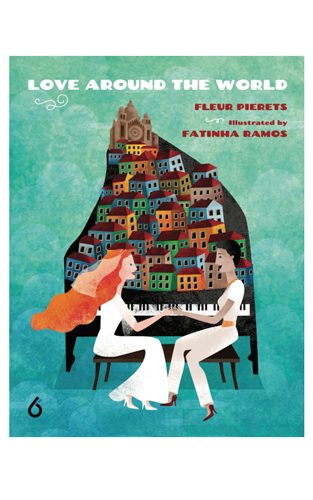 Love around the world is a children’s book about 2 women, who are getting married in the 28 countries where same-sex marriage is allowed.

In 2017, European female art couple Fleur Pierets and Julian Boom were about to get married in all the countries that legalised same-sex married. A performance piece that would take them to 22 countries on behalf of LGBTQ rights.

“It was very important to us to get that number out there. Not many people are aware of the fact that there are so few countries where same-sex marriage is legalized. We figured that marriage and love ― something that everyone can relate to ― was a perfect starting point to raise awareness.”

The couple got married in New York, Amsterdam, Antwerp and Paris. After the 4th. “I do”, Julian felt dizzy and was diagnosed with multiple brain tumors. She died 6 weeks later. There was only one thing that Fleur could do: to keep working.

“It’s been 2 years now since that happened and the only thing that keeps me here, that keeps me in this life is my deep empathy and compassion for human suffering. And the idea that I can do something about it. That my job isn’t finished yet.”

So Fleur wrote a book called Julian about her life and work as a female artist & activist couple, which got published last september in Belgium and the Netherlands. But as she was writing this book something occurred: “Last year I came to the US to write about the start of our wedding project. The first city we got married in was New York and I needed to feel the atmosphere again in order to write it down in the book. While I was there I was approached by a publisher who asked me to write a children’s book about our wedding project.”

And so it happend. Love Around the World is about 2 women – Fleur and Julian – who are getting married in the 28 countries where same-sex marriage is allowed.

“In the book, Julian doesn’t die, so it gave me the opportunity to finish the project, even if it was only on paper.” Pierets adds.

In the first volume the couple travel to Australia, Argentina, Belgium, Canada, Finland, France, Iceland, Ireland, Mexico, the Netherlands, Portugal, and the United States, learning the fascinating traditions and customs and peculiarities surrounding marriage in each country.

Pierets hopes this will help kids develop critical thinking. To have an open mind and to see that difference isn’t bad. That love is love, in whatever form it comes.