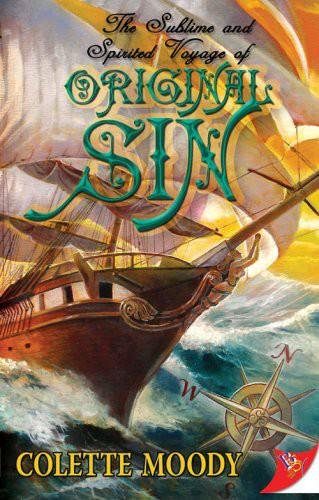 It is the year 1702 and the pirate ship Original Sin must find a quiet, sheltered bay in the Gulf of Mexico as her captain “Madman Malvern” has been seriously wounded in a clash with a Spanish galleon. Gayle Malvern, daughter of the wounded pirate captain, with a few trusted men, steals ashore under the cover of darkness to find a doctor.

Unfortunately the doctor is not at home but his very attractive fiancée Celia Pierce, the town seamstress, is.  Gayle decides that Celia must be able to sew as well as any doctor, and kidnaps her to help her father.  The Original Sin then sets sail for the Caribbean waters and the treasure the pirates hope to find.

At first the men are under the impression that Gayle Malvern is just relaying her father’s orders, as he is recovering from his wounds in his cabin. Also thinking of retirement, he is, in fact letting Gayle captain the Original Sin herself.   As time passes, with treasure building up, the pirates they realise that Gayle Malvern is just as ruthless and capable as her father and they elect her as captain of the Original Sin.

Gayle Malvern is starting to find her attraction to the seamstress is growing, with Celia becoming more than just the pretty company she has been enjoying. Celia, in the beginning a very reluctant passenger, finds herself falling in love with the dashing Captain Gayle Malvern.

Captain Gayle Malvern with Celia by her side sail the Original Sin around the treacherous waters of the Caribbean where they fight mercenaries, slave traders, other pirate ships and of course, the Spaniards who are sailing their ill-gotten gold to Spain.

This is a fantastic work of fiction by Colette Moody, but as history shows us, there have been female pirates from 231BC through to the late 18th century and these women were just as ferocious as their male counterparts.