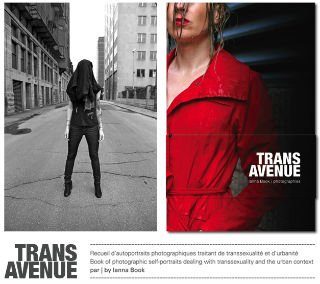 This glossy, softcover volume comes with a wide band of paper wrapped around its waist.

The photo on the band repeats the one underneath, and the doubly-belted effect makes the whole seem intriguing and mysterious. In the cover portrait, the author’s face is obscured but she is wet, wearing a bright red raincoat. The effect is appealing, mysterious, and gloomy all at once.

Probably other  readers are more au courant with transgender culture than I. For me, this book offered many firsts: my first awareness of photographer Ianna Book, my first photo collection devoted to transgender issues, and my first full-frontal of a transwoman. Though hesitant about opening all that up, I had to take off that wrapper.

As fitting for a transgender author, the book’s text is bilingual (French and English) and the settings binational (Montreal and New York). Furthermore, the author is named “Book,” suggesting a mirroring of author and creation in this collection of self-portraits.

About those striking backdrops: Book writes in the introduction of the “urban context as a platform for emancipation (a place for expression). In my opinion, the city offers a world of possibilities: it is open to the world and more tolerant of differences.”

However, this reader sees urban landscapes differently. What Book calls a “public space I deliberately tame” makes me feel vulnerable. She has opted to pose, often nude, in places where I wouldn’t: backstreets, alleys, rooftops, the middle of the street, subway stations. In one image, she looks as if she’s being threatened, by a large, featureless, shadowy-black figure looming above her on the fire escape. In another, she’s being carried off – albeit willingly – by an ape-man; she’s chanelling Fay Wray in King Kong. Through those photos, I experience the vulnerability of exposure in a hostile environment: her conquering this setting gives the series tension and drama.

Book is nearly always alone in these portraits, sometimes nude, and apparently aware of the camera/viewer as she exposes what she calls her “atypical body.” The portraits show her physical transformation from flat-chested, straight-hipped to curvy femininity. Along the way, she takes on or lets out various personae, some tough and some goofy. In one image she’s wearing a huge fake mustache, flat cap, and a suit vest; in another she’s adorned only in pink Silly String. She looks dead serious in everything. The message is one of extreme, defiant rejection of gender expectations, as Book exposes herself as a transwoman and an individual.

The portraits are engaging, and some are beautiful. Certainly they fulfill the promise of the promotional copy and “offer an alternative to the the cliché, the stereotypical portrait.” I’m glad that Book created this work to explore and share her different moods and modes of being. However, I wish that her apparent attitude to the viewer occasionally softened: her facial expression is sophisticated and probably authentic, but the persistent moue and half-closed eyes are uninviting.

As a whole the collection is graceful, stimulating, and original. Glad that I unwrapped that package, I look forward to whatever Book offers next.