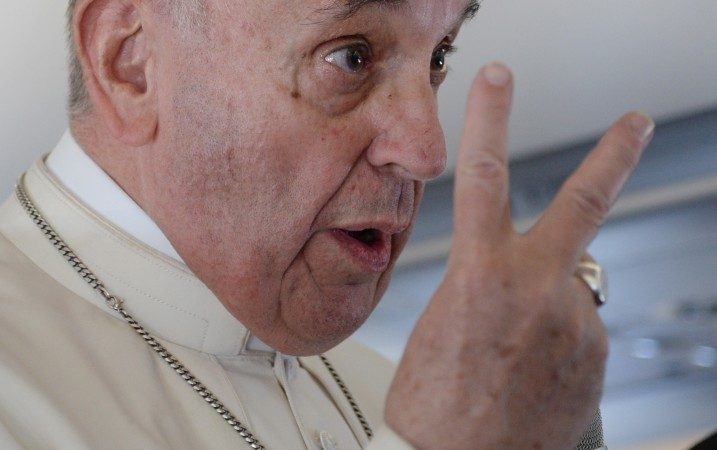 Who Is He to Judge? A review of Pope Francis in His Own Words, edited by Julie Collazo and Lisa Rogak

Why would any red-blooded, self-respecting lesbian want to read a book about a pope? Maybe because she was raised, or even still is, Catholic. Maybe because she cares about social justice, especially in South America. Or maybe because Pope Francis, appointed in March 2013, exemplifies tolerance, humility, and concern for fellow and sister human beings in a way that’s rare for anyone, let alone the Bishop of Rome and world leader of the Catholic Church.

Now famous for refusing the luxurious trappings that come with his office, for supporting an underdog soccer team, and for loving the folk music and tango of his native Argentina, the Pope began his papacy in highly unorthodox fashion, asking the crowds assembled in St. Peter’s Square to pray for him before he blessed them. After that first public appearance, the new pope was offered a ride in the special limo, but reportedly turned it down, saying, “I’ll just go with the guys one the bus.”The first pope from South America has gone on to refuse to live in grand style at the Vatican, turned down all manner of traditional papal perks, and – get this – does not denounce homosexuals.

Although he has officially supported the Catholic church’s standard doctrine on same-sex marriage and abortion (negative), he’s changed the tone of the pronouncements coming from Rome. He also publically washed the feet of people living with AIDS and of an impoverished Muslim woman, gestures of humility that none of his predecessors ever came close to.

The first Pope ever to use the word “gay,” he’s also the first to suggest that queers (and atheists, too) are not necessarily damned. Asked about homosexual priests, Francis replied, “If someone is gay and he searches for the Lord and has good will, who am I to judge?”

This collection of quotes by the pope is easy to read and handily organized, making it easy to find what the Pope has said on over 150 topics, including “Argentina’s Dirty War,” “Birth Control,” “On Soccer as a Metaphor for Life,” and more. Here’s the first excerpt I turned to:

The religious ministry sometimes calls attention to certain points of private or public life because it is the guide of its parishioners. What it does not have the right to do is force a [specific kind of] private life on anyone. If God, in His creation, ran the risk of making us free, who am I to meddle?

Some pope-punditscallFrancis a rock star, pointing out thathe’seven the subject of a new glossy weeklyfanzine, Il Mio Papa (My Pope). Othersclaim that he’s the voice of liberal Catholics who want social justice. But more sober critics observe that he has not changed any of the basic tenets of the faith, although as of March 2014 he did acknowledge in an interview with an Italian newspaper that there could be some acceptance by the chuch of same-sex civil unions.

So, who are we to judge the Pope? We’re citizens of the world, that’s who. Rather than accept Curve’s or anyone else’s assessment of the man, Curvettes can read the Pope own words in this slim, well-indexed collection of his most provocative, hopeful, and interesting statements. Even if we’re not Catholics, conservatives, or even church-goers, lesbians might want to know about Pope Francis’s worldview. Collazo and Rogak’sbook of quotations offers an excellent introduction.