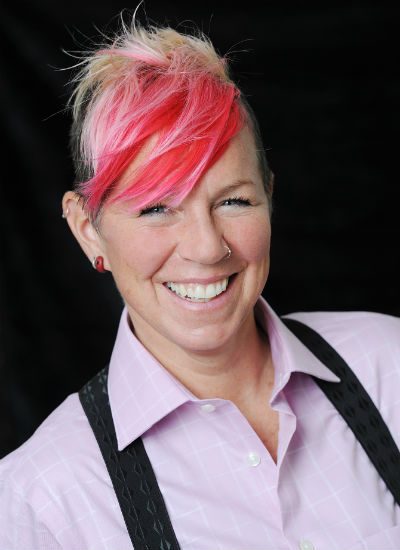 Singer-songwriter/educator Kate Reid told LLL in part one of the interview how she came to write her concept CD Queer Across Canada, and why she has pink hair.

Here she talks about her musical influences, including Long-Lived Lesbian Ferron.

Tell us about your music: how did you get started?

I picked up a guitar when I was about 17 and I started playing rock ‘n roll and folky things like Neil Young, the Beatles, Pink Floyd, Bob Dylan, and Joni Mitchell. My sister is younger than I am, but she got me into women’s voices. She introduced me to the Indigo Girls, and then I discovered Ani DiFranco in university and then Ferron afterwards. That’s a whole other story.

Tell us the Ferron story!

She’s one of the greatest songwriters I’ve ever encountered. I get choked up when I talk about it because she’s amazing. Her music was really pivotal for me – God, I don’t know why I’m crying!

For me, her music was about what it was like to be lesbian. I’d heard Ani DiFranco, this fiery woman talking about menstruation and abortion and all those feminist things no one else was talking about, and then later I found Ferron.

Ferron gave a voice and music to the feelings that I was having for women inside. To the relationship that I was having at that time — she put a heart into it. I felt like she was reaching into my soul when she sang.

I had a really interesting experience with Ferron at Michigan, and because of it I wrote a song on my second album, “Rise Up.” I loved Michigan. I had just started performing there, a year or so after my first album. I was part of the singer/songwriter round at Michigan, and I was doing my sound check in the morning. It was really hot, the sun was beating down, and I was profusely sweating. For my sound check I was singing a song called “Crone woman,” and suddenly I saw someone walking down the Bowl; it was Ferron!

I went backstage after I finished my set and someone said Ferron liked my song. I wanted to go and talk to her, but I had no sense of myself as musician or the lesbian. I had a bit of that “imposter syndrome”; I thought I wasn’t good enough, or people would think I wasn’t really a musician, just sort of a chick with a guitar who couldn’t really write or sing. But my friend said that Ferron was asking about me, and I should go talk to her.

So I went and sat beside her and we talked, and she invited me to her women’s writing workshop! She said, ‘I’m doing this workshop and then we’re having a concert at the end of the five days, and would you like to come and sing, and be a part of it?’

I couldn’t imagine how I could do it. I had all these things I had to do back at home. I didn’t have a lot of money, and I couldn’t figure out how to change my flight, and back at home, I was moving and trying to find a job at the same time, so I said, ‘No I can’t come.’ I just couldn’t figure out a way. Ferron just said, “Okay, maybe next time,” and I watched this opportunity pass before my eyes. I thought, Oh, God, what did I just do?

For the rest of the time in Michigan and for two weeks after I was kind of in shock. Why couldn’t I have said yes to her? What was that about? It wasn’t just about the money and the time; it was about not feeling good enough and feeling that I did not belong in that circle, the company.

So I went home and wrote “Rise Up” which is all about that experience. And there’s an addendum. The next year I was there, I gathered up the courage to tell Ferron about the song. I was in a talking circle, and I told her there. And she invited me again – and that time I got to go to the workshop and do the concert with her. It was such an amazing experience, and after that I was able to open for her a few times when she played in Vancouver.

I wrote about Ferron in my MA thesis, Singing Queer: Archiving and Constructing a
Lineage Through Song. I call Ferron my “lesbian-folksinging-foremother.”