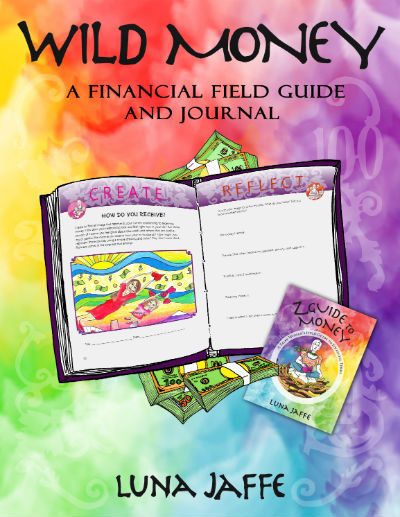 The problem with long-lived lesbians is that they really suck at money.

I feel as if the Wild Money books were written for me. The cover especially appeals to me: there’s sort of a tie-dye rainbow effect. When you wrote them, were you specifically targeting lesbians — or old, formerly rich hippies?

No, I was never aiming specifically for lesbians, nor for hippies who were once rich (laughing). There are two illustrators, and one, Rebecca [Owens], is a little younger than me, but she has that flower-child quality. Rachel [Dominguez-Benner], who did all of the lettering and charts and so on, has a very different style. She’s in her 30s, Midwestern, and more conservative than I am in ways that I’m always surprised by, because we’re so in alignment in how we work together. She’s straight, and so is Rebecca.

The problem with long-lived lesbians is that they really suck at money. It makes me sad.

When I came out in 93, the woman I fell in love with told me, “You know, Gillian, becoming a lesbian is like taking a vow of poverty.” It was a joke, but I realized what it’s like to be in a relationship with a woman, when both people are making less than a man would typically make.

That’s interesting, but it wasn’t my experience: I married a woman who had a six-figure job and was driving a sports car and was much more financially successful than the man I’d been married to. And our marriage was so much more traditional than my marriage to a man. I’d married a man who was like a gypsy; he didn’t want to be grounded. Then I married a woman who was all about responsibility and predictability, and we had an amazing life together.

We got a divorce two years ago, when I fell in love with someone else, and that was messy…But I’ve been through it. I have been divorced twice and experienced the impact of that financially.

Obviously, there are more and more professional lesbians, who are very successful, but if we were to create a stereotype, there’s almost a parallel. Gay men are all about both the money and how they look. They take care of their bodies better than gay women do. What’s up with that? Do we have to give up taking care of our money and taking care of our bodies to be gay women? Why? These things matter!