Drawing back the curtain on the queer female players of Hollywood’s golden age.

As a gentleman scholar of the golden age of Hollywood, Boze Hadleigh has been sure to include as many queer women in his 15 books as possible, and with good reason: a number of the most talented screen icons were lesbian, bisexual or queer.

In a new edition of the book, published this past fall, Hadleigh adds chapters on Greta Garbo, Jodie Foster, Ellen DeGeneres and Rosie O’Donnell and evaluates their contributions as queer women who changed their industry.

There were others he wanted to interview but who would not be interviewed, such as the late Bea Arthur. “She liked the idea of the book but didn’t want to be in it,” says Hadleigh. “I kept trying to interview her and we talked over the phone many times over the years…But it was a ‘don’t include me though’ kind of thing.”

Those who agreed to interviews were guarded if not hostile. Readers might be shocked to read that a furious Barbara Stanwyck ended the interview and asked Hadleigh to leave her house when he speculated that her marriage to Robert Taylor was one of convenience.

And Edith Head was tiny but intimidating. “She gave me an 8-page contract with the stipulation that the interview not appear during her lifetime.” All the women interviewed were deeply conflicted and closeted.

“That generation of women just didn’t want the reality [of coming out]. They came from a time when Hollywood had nothing to do with reality.” Some actors are that way even today, such as Jodie Foster. Her kind-of-coming-out at the 2013 Golden Globe Awards has been followed by silence. “I don’t think you’ll ever see her memoirs,” says Hadleigh. “By her own nature she’s a very closed person. When people are working in their commercial prime…they’re that much more difficult to access in terms of reality.”

Another factor that hides queer women in plain sight is often their bisexuality, which is more common among Hollywood women than men, notes Hadleigh. Add to that the fact that many Hollywood biographers impose their own morality on the subjects they admire and history becomes more bent than the star in question. Take, for example, the relationship between Katharine Hepburn and Spencer Tracy.

Was it real or staged? “We may never know,” muses Hadleigh. “He was a good cover for her. That’s always a big factor in Hollywood. And so, forever more it’s ‘Tracy and Hepburn.’ Of course, it comes out eventually that he was bisexual and so chronically alcoholic he may have been impotent and not able to have sex after a certain age.” But Hollywood’s made its mind up about Hepburn: The Aviator portrays her as a neurotic heterosexual and not the brilliant bisexual that she actually was.

“With Garbo, we know that she was basically lesbian, yes,” asserts Hadleigh. “But to what degree she was bisexual, we don’t know. Did she have relationships with gay men like Gaylord Hauser and Cecil Beaton? It’s possible, especially if both those men were trying to force themselves to be straight for their image.” 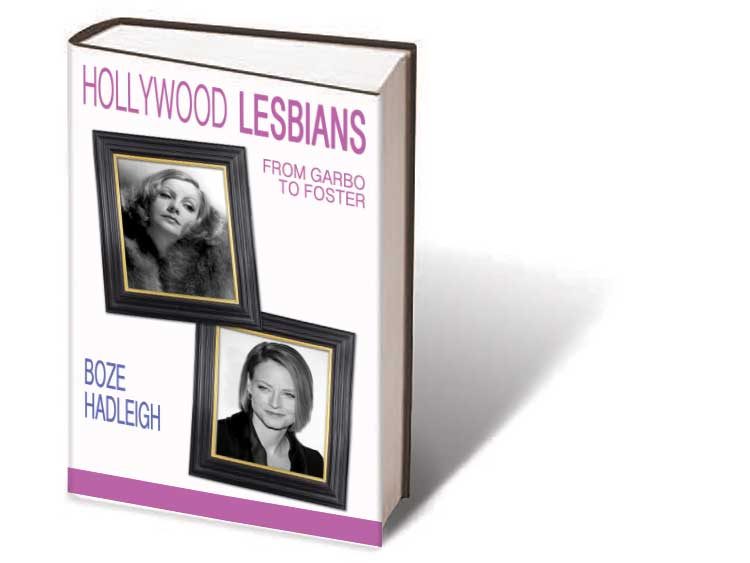 But according to Hadleigh, outing a star is not ethical or very effective. “Because if you say X is lesbian and they say they’re not, that’s what the media goes with—and much of the public. Very often with outing it has to do with how admired is the person. So if it’s a Cary Grant or a Katharine Hepburn, it’s much more difficult to get it out that these people were bisexual because they were so esteemed.”

A new generation is making a difference, says Hadleigh. “I think they’re so much more open about their sexuality, especially the women. If they’re attracted to another female they’ll say it publicly,” he says, citing Jennifer Lawrence and Amy Schumer, or even Cate Blanchett and Amy Adams. So maybe one day we’ll have the third edition of Hollywood Lesbians. But for now, this one is a fascinating read.