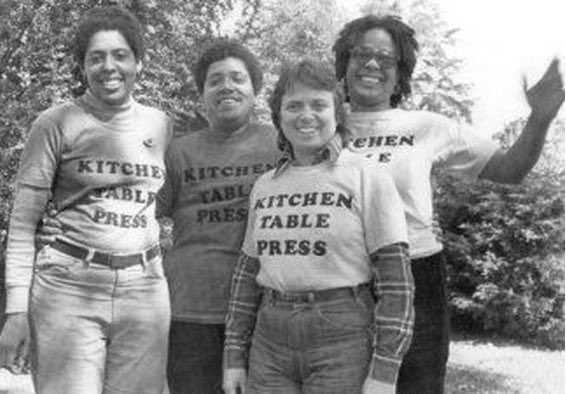 Kitchen Table: Women of Color Press, which produced the classics This Bridge Called My Back: Writings by Radical Women of Color and Home Girls: A Black Feminist Anthology.

A recent Telegraph article referred to as the “female sperm” news, has got the lesbian community buzzing about creating families without bio-men, exalted as a lifelong lesbian dream come true, getting lesbians excited about being “baby daddies”, etc.

Parthenogenesis, as we called this sort of science way back when, was a lesbian’s dream.

Today though, it totally scares the crap outta me! Because although as a lesbian-feminist is seems like an advance for women to (potentially) own both our sexuality and reproduction, it seems to me it’s actually the beginning (or continuation) of the end to an autonomous queer female culture.

The loss of an intelligent, independent, politically active, adult, childless (or childfree) lesbian culture whose members took care of each other and formed “families of choice and affiliation” not sanctioned by state or federal government, nor any religion, biological family, or other entities. All of this, I fear, will now be replaced with an army of married lesbos with broods of rug rats, the sum of whom will “be just like everyone else”.

I’ve already had a couple of conversations about this and each queer gal I speak to tells me I “sound like a right-winger.” I beg to differ: I think we have based our lesbian lives on the witch-hunts by and misinformation from the right wing for far too long. Instead of living our lesbian lives to the fullest regardless of public perceptions, disenfranchisement from the mainstream, etc. lesbians have been trying so hard to “prove” we are “just like everyone else” this horrible prophecy seems to have fulfilled itself.

I mourn the revolutionary spirit of lesbian activism such as that of the Lavender Menace in the ’70s and the Lesbian Avengers in the ’90s; the initiative of Black, Latina, Chicana and other radical women of color forming publishing collectives in the ’80s, like Kitchen Table: Women of Color Press, which produced the classics This Bridge Called My Back: Writings by Radical Women of Color and Home Girls: A Black Feminist Anthology.

These were (and still are) my lesbian-feminist bibles/roadmaps for forward movement regarding radical lesbian-feminist politics and discourse around race, gender, class and other such ignored annoyances and disturbances in the sea change of current gaystream lesbian lives.

While struggling may be “out” and normalizing “in” I believe it is deluded to believe that simply because we can get married in some states, are out on television, can and are forming nuclear families with spouses and children and pets and houses and cars and other supposed signs of progress towards mainstream acceptance, we are actually playing right into the hands of the right.

The right wing wants to tame us, get us under control and keep us within the narrow and confining strictures of mainstream society: marriage, pregnancy, shitty diapers, sleep deprivation, lifetime child-rearing, mortgages, car payments, credit card debt and other trappings of the bogus American Dream. Lesbians are the new and next generation of “barefoot and pregnant” women.

Not being “mandated” to get married and have children is part of what was so attractive about lesbianism to me as a young person. That is not why I am queer, but that is a great benefit for me still today.

The fun and frolic, hilarity and humor, difference and non-conformity, the in-your-face politics and personal-political acts of rebellion all seem to have gone by the wayside in lesbian lives. These days it seems to be all about very earnest lesbians planning to quietly fade into the legitimacy of the gaystream/mainstream.

For me, it is extremely sad and exquisitely painful to watch queer female/lesbian culture “normalize” and disappear in my lifetime…