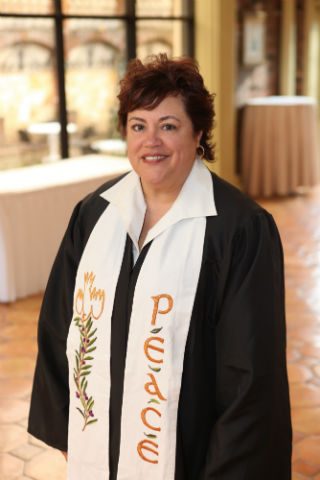 Rita Lamar grew up in New Jersey and was raised in a big, loving Italian family. As an out and proud lesbian, and an active participant in the LGBT community, she has found the Catholic Church’s stance on gays and lesbians “very confusing.”

“I was listening to people who were just like me talk about why they couldn’t be married in the Catholic Church. All I could do was apologize to them for the guilt and stigma put on them by the Church,” she says. She could relate, too, having been hurt by the same prejudicial views. Her way of coping, as she developed her relationship with God, came from the belief that sexuality is God’s gift.

Lamar, who has worked as a missionary, dreamed of becoming a photographer and her desire to facilitate the joy of others found a meeting place in the vocation of certified wedding officiant. “Gays and lesbians deserve to be treated equally in society and in the greater Christian community.

Becoming an LGBT wedding officiant gives me the opportunity to celebrate equality, unity, love and compassion in the LGBT community and to spread the word that God loves you. Awake or dreaming, you are loved.”

In addition to her work as a wedding officiant (Lamar has united around 60 LGBT couples) she also organizes fundraising events for outreach programs to help Angola, the Philippines and Brazil. “Gay or straight, rich or poor, everyone needs a roof over their heads, clean water, food, shoes and other basic necessities.

I frequently organize fundraising events with volunteer singers, musicians and other performers to raise money to literally put shoes on the feet of children in Third World countries.” During these events Lamar herself performs as a comic and uses humor to help raise money and awareness.”

As the CEO, photographer and officiant at Lamar Wedding Center her mission is two-fold: “To help turn a couples’ vision of their dream wedding into reality and to keep a lot of talented wedding professionals working to share their skills with these couples. It’s a business, but the service we provide is intimate, spiritual and very meaningful to us.”

Lamar is keenly aware that many lesbian couples need to get married on a budget. “There are many simple ways to cut down on expenses. Buffet-style costs less than a sit-down dinner; a DJ costs less than a band, and a couple can save several hundred dollars by having a cash bar or cutting out hard liquor.

There are also many beautiful gowns available off-season or on clearance, that are almost identical to expensive designer brands for a fraction of the cost.” Lamar also advises on how to be more frugal with the wedding cake, flowers, limos, invitations and even the tuxedo.

“All of these things are used for eight hours and then they’re gone,” she says. “A good photographer and videographer can help a couple remember their special day for many years to come. That’s an investment worth making.”

Lamar feels personally invested in the lesbian weddings she performs, often getting tearful herself because the ceremonies feel “deeply personal” and she wishes it was her tying the knot! One ceremony that stands out is when she married a couple with children. “It was a marriage not of two people, but of two families that became one. It was truly a moving experience.”

As marriage equality spreads across the country, many wedding vendors want their slice of the new market provided by LGBT lovebirds. “Lots of officiants say they’re gay-friendly. But five years ago, many of those same officiants were not gay-friendly. If you want a vendor or officiant that is truly gay-friendly, ask to see photos or videos of other gay weddings they’ve done when you interview them.

Ask friends for recommendations and look up their reviews. Many wedding professionals have just begun delving into the LGBT space and some, like Lamar Wedding Center, have been there for a long time. I’m not just gay-friendly; I am gay. And yes, I think that makes me more qualified to perform a personalized and heartfelt wedding ceremony for gay couples in love and their celebration of newly wedded bliss!”

Tying the Knot? Rita Lamar’s Advice on Making Your own Wedding Vows

“When LGBT couples write their own vows, they are often more heartfelt than what straight couples write. Some of them have been waiting for so long to publicly proclaim their love that it just bursts out of them!” says Lamar.

Here are her tips: