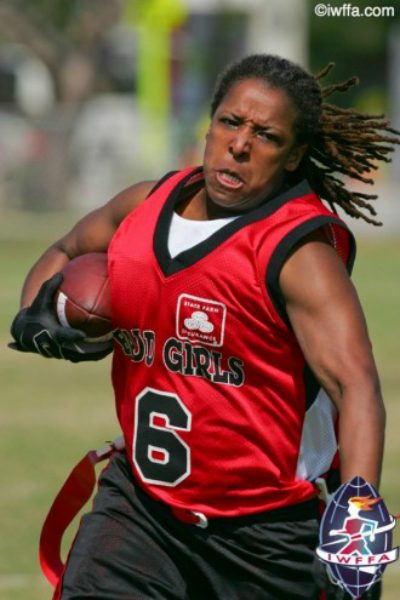 Women and girls from around the United States and the world are to gather in Key West for hard-fought sporting action for the Kelly McGillis Classic International Women and Girls’ Flag Football Championship, scheduled Monday January 25, through to Monday February 1, 2016.

The sporting challenge is named for and endorsed by the critically acclaimed actress and former Key West resident who starred in Top Gun and Witness. The success of the event is tributed to its sanctioning body, the International Women’s Flag Football Association (IWFFA), who travels around the world promoting and uniting female flag football teams and leagues. In 1997 the IWFFA introduced the sport in Scandinavia and it has recently entered Latin America.

There have been championship teams from countries such as the US, Canada, Finland, Norway, Mexico, Panama, Denmark and Scotland. According to Diane Beruldsen, president and founder of the IWFFA, more than 60 teams from North America, Latin America and Europe have been invited to join McGillis in the island city for the special 25th annual championship.

“This event showcases the different styles of female flag football from around the world and highlights the best of the best as well as welcomes beginners playing for the first time. Every female is welcome to compete in this great event.”

During the Key West championship, flag football teams are to compete in divisions based on age and skill level. Women 18 and over can compete in beginner, middle and higher divisions, while separate girls’ divisions accommodate players ranging from 8 years old to the late teens. The rules to be used are: For IWFFA, 8 on 8 semi-contact as well as for the first time, 5 on 5 non-contact.

After three days of Key West activities that incorporate team building, flag football training, officiating clinics and getting to know the island, the tournament’s opening ceremonies are set for 3 pm Thursday January 28 at the Rum Barrel, 528 Front St. Presentations by Key West city officials and guests are planned.

McGillis is to lead the parade as grand marshal, and also address the teams at their official registration Thursday evening at the Bourbon Street Complex located at 724 Duval St. McGillis also plans to take part in the tournament’s main social events.

Games are to begin at 9 am Friday, January 26, and continue through Sunday’s final World Challenge Game IX sponsored by Moped Hospital that pits the top U.S. All Star team against the top international All Star team. All games are to take place at Key West’s Wickers Sports Complex, located on Kennedy Drive off Flagler Avenue.

Awards presentations to the winning teams are slated for Sunday at Turtle Kraals Restaurant located at 231 Margaret St.

As well as cheering their favorite teams, spectators are invited to participate in the daily half-time games at the field which includes: wheel barrel races, bed races, tug a war, tandum bicycle races in addition to traditional kick, pass and  punt contests. Prizes to all winners.

In addition to the IWFFA sponsored event on Thursday night, September 25th at the Bourbon Street Complex, other social events, parties, water sports, fundraising activities and more are planned to round out the tournament action for players and fans.

For more information and a full schedule of events for the Kelly McGillis Classic, visit www.iwffa.com.