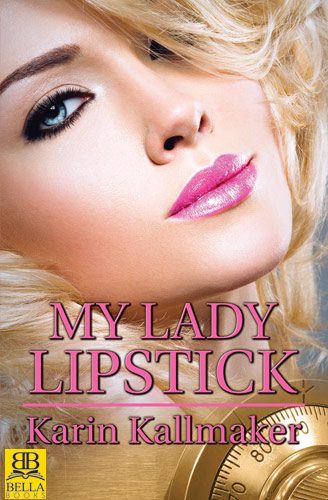 Fun and games with secrets and lies.

Paris Ellison’s life is perfectly ordered and quiet. She mainly keeps to herself, with an occasional visit with the two older women she rents her apartment from and a weekly trip to a local bar to drop off brownies for them to sell—usually made in a fit of stress baking.

Only Paris’s lawyer knows that she’s the real person behind Anita Topaz, popular romance author, and that’s exactly the way Paris likes it. No one needs to know that the books stamped with “A Smart Bodice Ripper” on their covers are penned by a shy butch woman, rather than the gorgeous blond from the stock photo she uses as her author pic. Unfortunately for Paris, her understanding publisher has been bought by a much less understanding one that is summoning her to start making public appearances. Even the notion of going public sends her anxiety into action, and dropping off another round of stress brownies leads to Paris bumping into Diana, an actress who’s been lunching lately at the bar.

Lady Diana Beckinsale is a master of disguise, taking on roles to help her get what she wants.

When she realizes Paris’s predicament, she makes a proposal that could work in both of their favours. Diana is surprised when Paris declines her offer, but doesn’t let that hold her back. With each of them sure to benefit, what do they have to lose?

My Lady Lipstick is a delicious romp that plays with secrets, lies, roles, and identities in a way that is fun while still delving into serious subject matter.

Paris is secretive about her identity because she was targeted by gamer trolls after she wrote an article criticizing a video game. Now she finds solace in anonymity, which means it’s a very big deal when she starts to build a rapport with Diana, and an even bigger deal when she falls in love with her.

Diana, on the other hand, lives a double, triple, or quadruple life, depending on what she’s trying to achieve, and she surprises herself when she shares her real name with Paris. A former gymnast who was forced out of competition by a nasty injury, Diana now seeks thrills by other means that require a different persona for each adventure. Seeing her choose to be honest and vulnerable with Paris as they get to know each other is wonderful and makes her character arc particularly satisfying.

Paris and Diana are very much an “opposites attract” couple. Diana loves the limelight as much as Paris hates it, especially because she makes sure she controls it every step of the way. She’s also as femme as Paris is butch, and it’s beautiful to watch her appreciate every ounce of Paris’s butchness, especially as she finds herself surprised to be attracted to a woman for the first time. They have a fabulous chemistry that builds from their first meeting, and even Paris’s occasional exasperation with Diana is an adorable extension of that.

At the beginning of the book, Paris isn’t happy when Diana finds out that she’s Anita Topaz. And yet, that one reveal allows all the fun to flow through the rest of the story in the spirit of the screwball comedies of the 1930s and 40s. Despite that old Hollywood feel and its accompanying zaniness, My Lady Lipstick also tackles issues that are both timely and timeless. We see Diana and Paris entangled with a CEO who can most kindly be described as a predator.

Men like this (and the women who have to interact with them) are not new in fiction or in life, but in the age of #MeToo and our current conversations about sexual harassment and assault both in and out of the workplace, Diana and Paris’s interaction with this man and the eventual outcome feel both relevant and like a vindication. Also, in addition to the PTSD that comes with Paris’s experiences, we see her manage an anxiety disorder on a daily basis.

That wasn’t a flippant joke above about stress brownies—baking is self care for Paris and part of her anxiety management, in addition to medication and mindfulness techniques. It’s refreshing to see mental health addressed more and more in lesbian fiction, and even more refreshing to see Diana embrace all of Paris, including her anxiety and its various triggers.

My Lady Lipstick is fun, funny, sexy, sweet, and even occasionally sad. Karin Kallmaker takes us through the full gamut of emotions as she delivers a perfectly plotted and paced contemporary romance. She’s a true master of the craft, and this book is not to be missed.