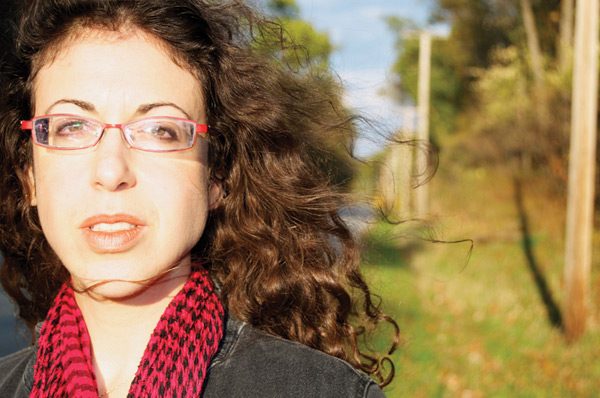 A new lesbian novel, ‘Herself When She’s Missing,’ delivers the literary goods.

A new lesbian novel, ‘Herself When She’s Missing,’ delivers the literary goods.

Sarah Terez Rosenblum has written an edgy, original, non-genre, and yet page-turning novel that will resonate with any lesbian who has fallen victim to a crush on a charismatic woman, attainable or otherwise. The seemingly together Andrea falls for the Shane-esque Jordan and together they share a passion for the lesbian-fronted band Cry Wolf.

The novel takes the reader into a labyrinth of she said/she said as their relationship ignites, catches fire, and goes down in flames, revealing many bittersweet truths about lesbian love and codependence along the way. We caught up with Rosenblum to talk about her inspiration for this heartrending and thought-provoking novel.

Herself When She’s Missing touches on a subject unusual in fiction but quite familiar territory in lesbian life: same-sex obsessive love. What was the inspiration for the story?

Ideas often come to me when I’m running or taking a spin class; in touch with my body, in a state of flow. I was walking home from the gym in April of 2008 when the phrase “The Criminal Mastermind loves reality television” popped into my head.

When I sat down to write, I realized the phrase connected to an idea I’d been mulling: We’ve all had the experience of watching a friend make a misguided or dangerous romantic choice, someone otherwise intelligent who becomes enmeshed at the expense of her own life and goals.

I was interested in exploring what might bind a person to an apparently dysfunctional relationship, but from the point of view of someone relatively levelheaded, in this case my protagonist, Andrea. Once I’d made that decision, the question became: If Andrea is so canny, and her love interest, Jordan, seems so obviously untrustworthy, what’s the draw? Is Andrea herself perhaps not as together as she thinks? And if so, can we believe her version of events?

The character of Jordan is so clear and resonant. I hesitate to ask if this is based on a real person or inspired by the advent of Shane-esque lesbians. Any thoughts you’d like to offer there?

Put it this way: Shane-esque lesbians were sauntering around screwing with women’s minds long before Kate Moennig shimmied into those leather pants. Hey, let’s talk about Kate Moennig some more!

There are a few really nice features about this book and the artistic choices you made: these include Andrea’s compulsion to make lists and to draw figures. Where does this come from – in her, and in you?

I’m definitely a list maker, if only because I can’t stand downtime—I need to keep my brain busy. That said, lists aren’t a part of my second novel, they haven’t figured into my short stories.

I think it’s a little precious when writers behave as if their characters have free will, but I have to say, in the case of Herself, I didn’t choose to use lists, Andrea did. They were an organic by-product of her voice.

So much of Andrea’s reality is this sense of being caught inside her mind, victim to whirling thoughts and anxious ideations. She uses lists and figures to structure her reality, to create distance and give herself the illusion of control.

Who was the inspiration for the band Cry Wolf, the obsession Jordan and Andrea share? It’s a good device to bring them together, but what were you trying to say about lesbians and music crushes?

I just got another message from a fan asking me if Adrienne, the female half of Cry Wolf is in fact based on Amy Ray. Obviously, there’s no way for me to control people’s perceptions and I wouldn’t want to.

If I’ve created a character alive enough to inspire speculation, dynamic enough for readers to imbue with their fantasies, I’ve done something right. That said, the idea of Adrienne as an Amy Ray knock off kind of confounds me.

I actually did have a specific lesbian performer in mind when constructing Adrienne—someone who has internalized her fans’ devotion and is resting on her laurels. Someone hungry for a platform but not bright enough to use it constructively.

I’ve had the pleasure of interviewing Amy Ray several times and I can vouch for the fact that aside from both being charismatic altos, she and Adrienne have little in common. To answer the rest of your question, I wasn’t thinking specifically in terms of lesbians and music crushes, although I do think lesbians have a tendency to fixate more fiercely than do their straight counterparts.

I’ve always been fascinated by fandom in general. It fills the same hole that drugs, alcohol, sex or religion might. It gives us something larger than ourselves on which to focus. In moderation, being a fan might provide inspiration, crank the dial on life’s intensity, but if your life feels uninhabitable, fandom can become a tool for dissociation.

Jordan’s addictions are more conventionally destructive and Andrea judges her for them, so for me, Cry Wolf provided a way to implicate Andrea as a fellow addict, even if Andrea doesn’t see it that way.

This novel feels autobiographical, perhaps because of its intensity. Was it, and if so, how did that feel?

Answering this question feels complicated because as a reader I relate to that feeling. When I read certain books I absolutely know I’m reading something authentic.

On several occasions I’ve had the experience of reading an author’s work and later meeting her and being proven right. However, as a writer, I firmly believe that a truthful novel is not necessarily a fact-based novel.

To me, fiction is a fast-track to the sort of truth with which facts interfere.

If not autobiographical, how did you get inside these characters’ heads and bodies so thoroughly and convincingly?

First, thanks for saying that. More than anything, I want my characters to come alive for readers. An amazing writer and former teacher of mine, Janet Desaulniers, once told me, ‘Write everything. Don’t save anything for later,’ which I took to mean:

If you walk down the street and see a homeless person bleeding on the sidewalk and three joggers pass in front of him without breaking stride, use the image. If Britney Spears flashes the paparazzi while climbing from a cab, put that in.

We absorb so much in a day. Give some of it to your characters so their lives feel just as full.

If you sold the film rights and the film was cast with your approval, who would your actors be?

Speaking of commercialism, how easy or difficult was it to get this novel published?

I didn’t consider whether or not a lesbian relationship would hinder the Herself’s marketability—not when I began writing, anyway. At a certain point, one of my early readers, a woman I didn’t know well, casually referred to the book as “Dyke Lit,” a riff on “Chick Lit.”

First I got angry, because it felt like a very dismissive categorization—I don’t consider Herself light, beach reading. Then I got anxious—by far my favorite emotion: Anxiety and I go way back.

Let me be clear, I love my lesbian readers. I’ve felt incredibly supported by that community. Their response has been enthusiastic and possessive—the quintessential lesbian emotional combo.

However, I believe the book has more to say about an imbalanced power dynamic—something that can occur in any relationship—than it does about lesbian relationships per se.

So I worried that publishers and ultimately readers would categorize and possible reject the book based on what I see as one small aspect. Luckily that hasn’t been the case. To my knowledge Herself’s queer content didn’t get in the way of interest from publishing houses.

I’m lucky enough to write and publish in a time during which definitions matter maybe incrementally less—in fiction and in life.

Any advice for other young and not-so-young lesbian novelists wanting to write about lesbian relationships and themes?

Don’t be afraid to write what others might not want to hear. You don’t have to act as a Queer Ambassador. Lesbian relationships, like all relationships have their power imbalances, their murky areas, their bad behavior.

If you’re worried about providing a positive representation, go write an op-ed piece or make an “It Gets Better Video.” A writer’s job is not to set a positive example but to deliver truth, beauty and devastation in equal measure.

That’s not so hard, right?