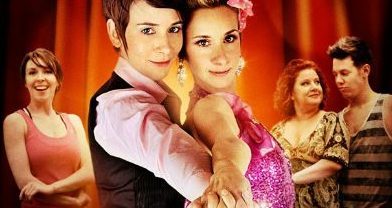 There are two things that I love—music and dancing.  The film Leading Ladies has both in abundance!

The movie is about an overbearing stage mother, Sheri Campari (Melanie LaPatin), who drives her oldest daughter, Tasi (Shannon Lea Smith) and her dance partner, Cedric (Benji Schwimmer), insane with her constant hovering and need to win.  Mama is so caught up in the dance drama with Tasi and Cedric that she fails to notice that younger daughter, Toni (Laurel Vail), is a much better dancer than her sister.

When Tasi becomes pregnant, Toni is called on to take her place for an upcoming ballroom dance competition.  Toni is rather shy, and she’s not sure she can dance in front of people.

Cedric takes her to a gay dance club where she meets Mona (Nicole Dionne).  They go home to Mona’s that night, and Toni realizes she’s been suppressing her sexuality.  As an aside, Benji Schwimmer, who won “So You Think You Can Dance”, a number of years ago, does a terrific dance number with a male partner at the dance club.  In light of the two men who are dancing together this summer on “America’s Got Talent”, this film-reviews was ahead of its time!

Toni and Mona begin spending more and more time together.  When someone asks Toni if they are a couple, Toni denies is and almost loses Mona.  Toni’s intuitive male boss at the diner where she works figures out what’s going on and tells her to follow her heart.  Toni goes to Mona and asks her to dance with her at the competition.  When Mama finds out what’s going on, she does what any good drama queen would do, cries and makes it all about herself!

Toni stands up to her and Mama comes around.  During the check in for the ballroom competition, the judges disqualify the couple because they are same-sex.  You don’t do that to Mama, so she goes in to a tirade about the unfairness and where does it say in the by-laws, etc. speech.  Of course, Tasi goes in to labor right at that moment, and they all rush to the hospital.  The scenes in the waiting room at the hospital are hilarious, especially the patient who eavesdrops on their conversations.

This is a fun film to watch with your partner on a rainy Sunday.  Be sure to watch the credits at the end of the movie so you want miss some more fun!