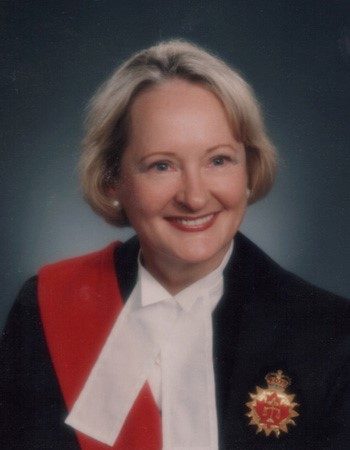 Marie Corbett is retired and living with her wife in Florida

Judge Barrett could request an adjournment, and restore confidence in SCOTUS

After Ruth Bader Ginsberg died, the Supreme Court of the United States (SCOTUS) seemed doomed to a conservative majority, which meant that US citizens soon would lose both abortion access and affordable health care.

Enter Trump’s nominee for Supreme Court Judge, Amy Coney Barrett, an exemplar of hyper- conservatism.  With her came ominous signs: her reception at the White House became a super-spreader event, after which not only President Trump but a number of key Republican senators contracted Covid-19 and entered quarantine.

Yet Mitch McConnell threatened to bully ahead with the judicial hearings scheduled for October 12. What could anyone do to stop it?

Marie Corbett, a retired Canadian federal court judge and lesbian elder, knew what could stop it. Corbett, now a US citizen living in Florida, said in an interview:

“There should be a direct approach to Amy Coney Barrett. What can the nominee do to honor the woman whose place she is taking on the Supreme Court? Why doesn’t she, the prospective nominee who will stand in the shoes of RBG, honor her dying wish?

“She should take action to show that the judge she is replacing is honoured and respected in a personal way. I find it disrespectful if she does not do something to honor the judge’s dying wish.

“It isn’t a question of her stepping down or anything like that. It’s just that she’s replacing a woman who has done so much for equal rights, for women’s rights, for the whole nation, for all time into the future. This is the least she can do to honor and respect her.

“This would be a small measure of personal respect. I don’t have any confidence that she will respect the legal tradition of Justice Ginsberg, because Barrett’s legal record is extreme on the other side. Barrett was selected because she’s a hard-right ideologue. Here are some examples:

“She was the lone dissenter in a Wisconsin case where the law said if you were a convicted felon you could not possess firearms.

“She dissented on a case where the majority ruled that if you were an applicant for a green card, you could apply for welfare benefits.

“She dissented on any inroads made to protect Roe V. Wade. She calls those “eugenics statues.” Significantly, she disagreed with Chief Justice Roberts’ decision and rationale on saving the Affordable Care Act. Those are just a few, on a professional level.

“On a personal level, she is a member of the Federalist Society, an arch-conservative organization, and she’s a member of a religious group, the People of Praise. I understand in that group, wives have to follow the directions of their husbands.

“Her nomination has drained the US Supreme Court of its public legitimacy. A crucial requirement for the public to have faith in the judges and the judiciary is that the judges are impartial.

“Just as justice must not only be done, it must also be seen to be done. Impartiality must not only take place; it must be seen to take place. That is now being eroded, and it shocks me. So what can she do to increase the public’s faith?

“Barrett doesn’t have to do much – she could just make the request. That would give her enormous stature and it would signify her personal integrity.

“What can anybody else do? We should bring this to her attention:  there should be picketing outside her home in South Bend, Indiana, with people carrying signs saying AMY, DO YOUR PART! REQUEST ADJOURNMENT.”

If Barrett were to make such a request, what would be the outcome?

“If the Republicans were to win in November, there’s no downside for her. The hearings would go ahead and she’d be appointed to the Supreme Court.

“If the Democrats were to win, the next member of the Supreme Court would be appointed by President Biden, and Barrett would have honoured Ginsberg’s dying wish.”

Marie Corbett is the author of January: A woman’s judge’s season of disillusion.