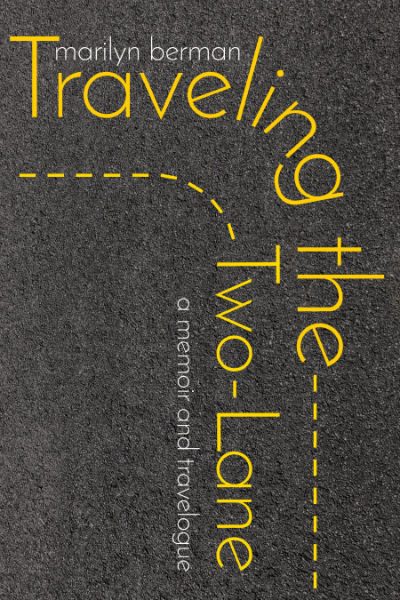 I wanted this author as a ‘friend’ but it’s too late.

Recently I read a book by a long-lived lesbian that made me feel as if I’d made a new friend. Traveling the Two-Lane, by Marilyn Berman, is the best kind of travel memoir, one in which the author reveals as much about her inner journey as the landscape she’s passing through.

At age 63, Marilyn Berman quit her job, rented out her home, said goodbye to her friends, and headed towards Alaska. She planned to be away some 18 months, driving a customized VW Eurovan down the backroads of the USA and Canada, seeing things she’d never seen while she was “still physically and cognitively intact.”

The phrase “bucket list” wasn’t in vogue when Berman made the trip, but she intended to make the journey while still well enough to enjoy it. Her timing was fantastic: three years after her return home, she experienced the beginnings of a series of medical conditions that would require surgery and radiation. This would ultimately take her life.

Because she was under five feet tall and unaccustomed to travel, nervous friends and family urged her to prepare carefully, which she did. “Life is short; the idea of this journey is fascinating. I would take reasonable precautions and enjoy every minute.” Planning her route, she bought a GPS she called “Mazie Grace” (as in “I once was lost, but now am found…”). She also took books, lots of them, to support her “addiction” to reading, as well as a TV which she never used.

At the same time she underwent the long journey – thousands of miles as far east as Newfoundland, as far west as Banff — she used the time to reflect on her life as a lesbian. Growing up gay in Chicago in the 1940s and 50s, Marilyn knew from an early age not to tell anyone about her crushes on her teachers and other girls. Her parents’ financial and social difficulties when she was in her teens made her mindful not to cause further distress by coming out, as did their failing health when she was older. In fact she never did formally tell her parents about her orientation. Some friends knew, of course, but most of her life, Berman lived with a degree of secret-keeping that seemed necessary yet made her uncomfortable. Only at age 60 did she come out to everyone. “I had a half-century with a secret life. At first all alone, then known to a few, then many – fifty years with two lives, slowly merging into one.”

Reading Berman’s reflections on her long lesbian life, I felt moved to write to her, to contact her for this column, and maybe even become a friend. Her story struck me for its sadness but also for its honesty: I think there are a lot of LLLs in the USA who have lived “double lives” for a long time. To all of them, I recommend this book.

But I have another, more sobering, piece of advice too: anytime you find a book, a film, any piece of art that grabs you, reach out to the author right away. Don’t wait.

The day that I emailed Berman’s publicist to ask for an interview was the day that Berman died. When I got that news, by email, I first gasped and then cried – as if I’d lost a friend. How close I felt to this author, and what a loss that I can never interview her for LLL.

Yet what a gift her book is, an honest and faithful account of her lesbian life’s journey.