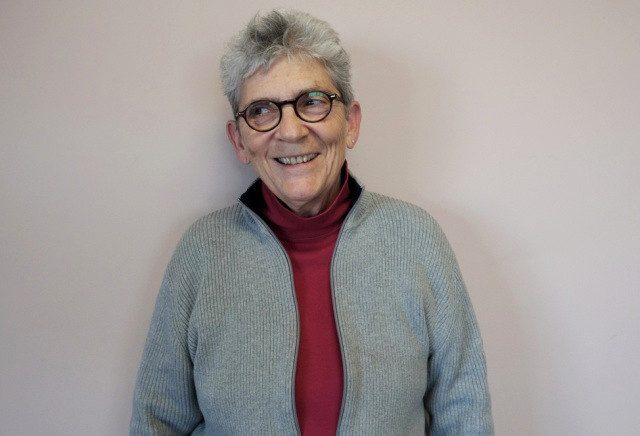 Esther Newtona’s memoir about being a true gender outlaw.

You can pick up Esther Newton’s, My Butch Career, open it to any page, and just start reading. In the tradition of the best memoirs, it is chattily engaging, historically illuminating, and deeply, provocatively ruminative. One would expect nothing less from the pioneering author of the first major anthropological study of a homosexual community in the U.S. Her dissertation, which later became the book  Mother Camp: Female Impersonators in America, was written just after Stonewall and is now an iconic work of queer scholarship.

But when she wrote it, no one had ever seen anything like it. Newton gave birth to a whole new academic discipline.

Regardless of how easy it is to start it anywhere, you should read My Butch Career beginning to end. Then tell your friends to read it, too. Her memoir is a tale of lesbian feminist anthropological history/herstory as told by a gender outlaw. Newton details growing up a “tomboy,” and searching for a range of identities through a chaotic childhood. Later she shape-shifts between the closet and gay bars, discovering sex and exciting women; role-playing lesbian Margaret Mead and breaking ground with writings about drag queens, camp, Fire Island, Cherry Grove, and the iconic Radclyffe Hall; living several lives and trying on more; settling in Paris, coming back to America, and finally becoming fully, unerringly butch and a world-renowned scholar of gender and queerness.

My Butch Career reveals Newton as a narrator who is both an objective storyteller and an emotional raconteur. The memoir delves into Newton’s childhood and adolescence, linking her family’s past and her own disjunctive upbringing to a complicated search for the right career in her adulthood, culminating in 1980 as she turns 40. The story takes us through her relationships—her family, her lovers, her friends. Second Wave readers will recognize many names, including jill johnston, Gayle Rubin, Amber Hollibaugh, and Holly Hughes, Newton’s partner of nearly a quarter century. She traverses the wildness of the 1960s, which she counterpoints with the perils of negotiating the closet while trying to establish herself as an anthropology professor. We go inside her therapy and come out with her questions about lesbian desire and erotic attraction to women.

Newton is always questioning: her life, other gay and lesbian lives, what it means to be butch, the distinctions between butch and trans identities, femininity, masculinity, gender. It’s the proverbial whirlwind, and all of it feels as though it’s being told to us over the various courses of a delectable and complex meal. It is that unflinchingly intimate and personal a tale. My Butch Career feels intoxicating, palpably real: It’s a story we can reach out and touch and one we can also situate ourselves in, even if we’re decades younger than the 78-year-old Newton. What makes My Butch Career so compelling is that while writing about herself, Newton is also examining her milieu with the eye of the cultural anthropologist she became. The story she tells is as much our story as it is hers.

When we sat down to talk, Newton discussed everything from lesbian orgasm to Paris, where she lived for a time, to the evolving discourse on gender, which has been the focus of much of her work. She spoke to the crushing nature of the closet and to her concerns for LGBTQ people under Donald Trump. Esther Newton is one of a breed rarely mentioned, in our pop-culture-driven society, outside the sometimes stultifying halls of academe: She is an unabashed and life-long intellectual. That intellectual fervor melds with her butch lesbian identity to produce a life lived with rapacious gusto and avid curiosity. She quite obviously wants to know everything about everything and then tell others all about it. Newton explained why she wanted to tell these lesbian and queer stories. “I always wanted to study our [LGBTQ] community,” she says. “I’m queer, I’m lesbian, so it always interested me.”

She also wanted to be a writer and says that putting writing and the field work of anthropology together felt very natural to her. My Butch Career evolved out of her desire to “tell my own story.” She kept journals for years, and many of the memories she captures in the book are culled from those journals. Twenty years ago she read at a lecture series, and the response to her work was enormous. “People loved it. There was a standing ovation. And it made me realize people really wanted to read this work, they wanted to hear this story.” The most defining story for Newton is her own lesbianism. “The formative experience of my life was coming out in the bars in 1959. It was just so stark—the class difference was so different, it was very stark in my mind.”

Newton struggled to figure out how to be a lesbian in a community that was largely working-class when she was not, and when she wanted a career. “I had already chosen higher education over the strongest passion in my life, my love for women because the two seemed incompatible.” Yet she grew up predisposed to be lesbian. In My Butch Career she writes, “I became an anti-girl, a girl refusenik, caught between genders,” and that her “child body was a strong and capable instrument stuffed into the word ‘girl.’ ”

Newton says My Butch Career is fundamentally a history. “I’m very historically minded, and I want our young people to know where they’re coming from, whether they know they want to or not. Queer people—our queer history—we’re just not taught in the schools, in K through 12,”  shesays. “How will they know about us if we don’t tell the stories? There is nothing there unless we write it down, unless we tell it.” As we talked, Newton noted how she had been watching the CNN decades series and how shocked she was that “there was no mention of lesbian or feminist anything in the sixties.” It was, Newton says, as if all that history had never happened. “It’s hard to erase lesbians—we’ve done so much work for social justice. Yet did we ever even exist? In that CNN series—all the work that we had done was just gone.”

In the book, Newton writes, “To claim an identity is to place oneself in a narrative of history.” When asked about that compelling statement, she explains that she wanted to write this book not just because she wanted to tell her own story but that she “wanted to write about gender. Gender has always been my thing.” The memoir is “my interest in understanding lesbian experience” in all its facets—sexual and otherwise. She says, “Sex was an imperious force in my younger years,” and the book has many compelling details. “I was always trying to figure out what would work for me sexually.”

Spoiler alert: She did.

The book is also, Newton says, “the political story of the United States, the social justice values that my parents had.” Her own leftist and feminist politics evolved from there. As did all her questioning about identity, which is at the core of the memoir. “That I have been willing to embrace feminism when I felt like maybe I’m not a woman, that I’d been isolated in my politics—I wanted to explore all of that.” Newton writes about how excited she was to be a professor, and she talks about her students and the give and take of the college classroom. But the fights she had to wage as a feminist and as a “suspected lesbian” were grueling and enraging. She was fired from one college and had to repeatedly justify her work and herself at another. Now retired and a professor emeritus, she sees the battles she fought for recognition and acceptance in the 1960s and ’70s in counterpoint to the current fight to keep lesbians from being erased and the fight against the toxic Trump presidency.

She has taken back the word “lesbian.” She revels in butch identity. She wants young women to “learn about pleasure” and not just the mechanics of sex. She feels confident about the authenticity of both her memoir and her butch career as a gender outlaw, teaching others not to conform, not to straight-wash their lives. Teaching others to be gender outlaws. “Writing my book is saying, ‘You tell your story as authentically as you can.’ Every generation has to stand up. We have to fight for it—for ourselves, for who we are, for the country, democracy. The main thing I can do, now that I don’t teach anymore—I guess I’m still teaching in a way—is to say why it’s worth fighting for.”

My Butch Career does that and more.