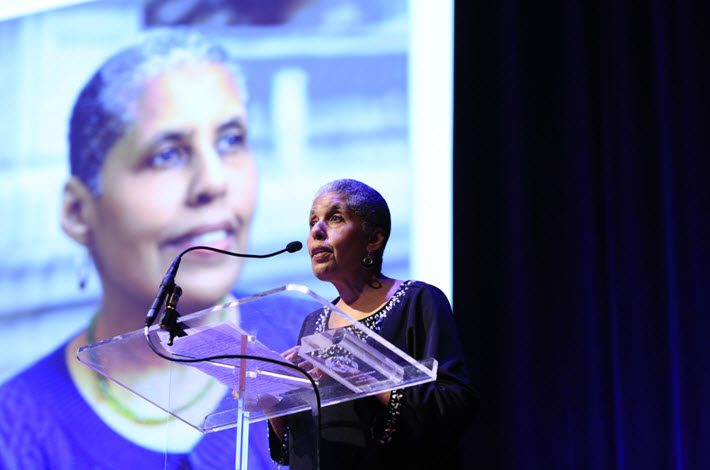 Lesbian authors and Curve writers acknowledged at the 2016 LAMMYS.

Lesbian authors and Curve writers acknowledged at the 2016 LAMMYS.

The winners of the 28th Annual Lambda Literary Awards (known affectionately as the “Lammys”) were announced on June 6, in a glittering gala ceremony hosted by the ever-brilliant comic Kate Clinton at NYU Skirball Center for the Performing Arts.

The enthralling ceremony saw over 500 erudite attendees, sponsors, and celebrities gather to celebrate the vibrant and thriving LGBT book publishing business and the continued commitment to LGBT stories by publishing houses, big and small.

This was the 28th year of the awards, and boasted thoughtful and stimulating presenters such as Broadway star and Rookie editor Tavi Gevinson, who presented the Trustee Award for Excellence in Literature to her friend Hilton Als, writer at The New Yorker and author of the award-winning White Girls.

“This is an amazing event,” said Gevinson, who shared her deepest feelings about the craft of writing to a rapt audience.

Numerous speakers kept the crowd spellbound, including the charismatic poet Eileen Myles, who received Lambda’s Pioneer Award. Native American poet Natalie Diaz introduced Myles by saying, “It amazes me that it has taken this long for the country and arts to recognize what I have known all along. That Eileen is amazing.

She made a space for us.” Myles herself  then read new work in her characteristically interior and rhythmic style, giving us a taste of why she has deservedly become the inspiration for characters played by Cherry Jones and Lily Tomlin on TV and in film.

Keeping the pace and tone of the evening buoyant was the wit of Kate Clinton, who riffed on everything from her namesake presidential candidate to the need for more lesbian erotica.

Curve was thrilled to see some of its own writers nominated for awards: Fletcher De Lancey for The Caphenon and Sassafras Lowrey for Lost Boi, while senior politics editor Victoria A. Brownworth won Best Mystery for her gripping novel Ordinary Mayhem.

Curve congratulates all nominees and winners, and is pleased to announce the following 28th Annual Lambda Literary Award Winners in the following categories of lesbian interest:

·  Life in a Box is a Pretty Life, Dawn Lundy Martin, Nightboat Press

·  Objects in the Mirror Are Closer Than They Appear, Kate Carroll de Gutes, Ovenbird Books

A full list and more info on The Lambda Literary Review