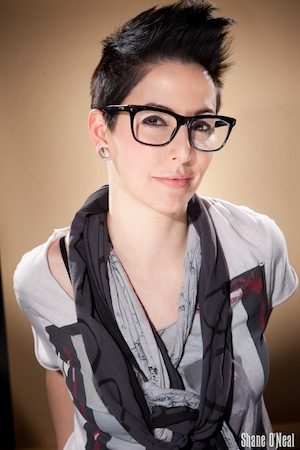 Find out why this Sapphic spinstress is the unofficial lesbian mayor of Las Vegas.

Las Vegas Pride 2012, Rumor Resort, this will be the only place to be September 6 – 10. Shedonism returns for the second year and this year be prepared to be blown away by talent and loads of fun. Hunter Valentine and the cast from The Real L Word, a celebrity charity Texas Hold Em Tournament benefiting National Center for Lesbian Rights, four days of dance parties, pool parties, there’s something for everyone.

DJ Lisa Pittman is quickly becoming the “unofficial” lesbian mayor of Las Vegas. A staple on the scene in Las Vegas clubs for the last 10 years. She is finally bringing her dream to fruition. We caught up with Sapphic Spinstress to have a chat about journeys, music and her dream for Gay Vegas.

Are you and your partners winding up for September? This is your second year right?

Yeah, it’s almost here. This is our second year. Last year we did it with little to no talent. We’re really loading up on talent this year. Last year, we did it mostly with The Real L Word cast and a lot of my friends from L.A.

Well, more talent is certainly a draw. Have you sold out the hotel yet?

It’s like lesbians woke up from camping and realized that they hadn’t gotten their tickets yet.

Right! Ok, let’s back up. What made you say I have to get this started? You have been doing well as a DJ. What would make you take on such a massive responsibility? When did you decide to become the lesbian mayor of Las Vegas

Ha, that’s funny. Well, you know it really started for me at Studio 54. It was my first DJ job, at this famous night club. And a lot of lesbians used to come see me spin. So, the guy who was my mentor at the time said, hey we should give you a night. So, they gave me Thursday nights. My own night, which was a pretty big deal. I promoted it and we called it the Dollhouse. Then a couple years later, a gay bar in town asked me to DJ a girl’s night. And I did, and they came. And it kind of turned into a traveling party.

So, you were filling the need for Vegas lesbians.

Yeah, but I always wanted to do something like Shedonism. I was always too busy. I looked a lot of properties. And a finally an investor came in a couple of years ago and bought this hotel. It was a dump from when I was like a kid and I always thought it was the perfect spot. As soon as their renovation was done, I was knocking on the door saying I need to do a party here.

How did you come up with the name?

I probably spent a year wracking my brain between this and that. And it just kind of came to me as I was driving one day. My whole theme behind it was Sin City, selling Vegas along with the event. I thought [about] the Seven Deadly Sins and hedonism. And then name Shedonism came to me. So we’ve built everything around a Sin party in Las Vegas. We’ve even created our own definition for the word.

Shedonism ~ The feminine art of being sinful. Excess, indulgence and debauchery. Devotion to pleasure as a way of life. Pleasure and happiness serve as the ultimate goal. Un-lady like behavior encouraged. (shedonismvegas.com)

Once I had that all together and I had the hotel on board, everything started moving really fast. And got really big, really fast. So that’s when I brought Alison and Amy on board because I realized I needed bigger promoters, national promoters that could really make this big.

This is your partners Pandora Events out of South Beach¸right? How did you meet them?

A few years back they hired me to work on their events. So when I had my stuff together for Shedonism, I called Alison and asked if she would negotiate the hotel contract for me. She said no I will not, but I will come on board if you want to take us on board. So, I thought about it a few days and decided it would be good to have them on board.

Pandora Events provides women with some of the best lesbian events in the country. Creators of Aqua Girl in Miami Beach as well as all of the women’s events for Atlanta Pride, they believe in partying with a purpose. With the National Center for Lesbian Rights and National Gay and Lesbian Taskforce as two of the many charities that benefit from the parties of Pandora Events.

Do you think this is something you want to take to other cities?

I was raised in Las Vegas. I watched it go from being this little town to this gigantic mega city, with this “if you build it, they will come” kind of mentality. I just want to make this bigger and bigger. Not necessarily to take to other cities, but make it one of the biggest gay events in the world. And then we can takeover huge hotels in Las Vegas. That’s my vision, that we just take it to the top, ya know?

I am doing exactly what I want to be doing right now. This is can be a tough business and it’s a lot different than it was when I started 10 years ago. The rewards are better because what I’m doing is on a much larger scale. I work in the newly crowned best nightclub in the world, the Marquee Club. I have a radio show. I do live gigs. I’d love to perform with like Rhianna or Lady Gaga.

So, right now you’re concentrating on bringing everyone to Vegas for a sinfully good time?

You know there’s tons of stuff to do in Vegas. So, you have to give people a really hot party to get them to come and spend their time with you. Our Pride is still relatively small. You know, we did our first Dyke March last year because of Shedonism. As a gay market, we still have a lot of space to grow. Vegas is a liberal city. There’s me and couple of other gay guys here trying to make Vegas a destination city for gays. Ironically enough Vegas is the number one or number two destination city for gays and lesbians. But they come to go to the shows and gamble not necessarily to go to the gay bars. It’s good to come and have a Vegas experience and we also want you to have a gay Vegas experience.