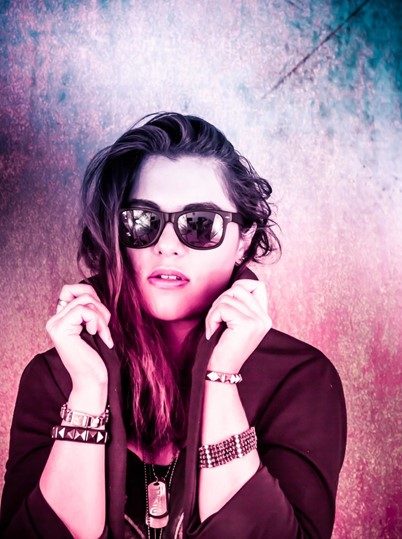 Laura Dre has today announced the details of her hotly anticipated single Moving Spaces which is set for release on January 22nd through Outland Recordings, one of the world’s leading synthwave music companies.

Moving Spaces is the title track and lead single from her forthcoming debut album, produced by Dre and Robert Harder (Brian Eno, David Byrne, Sohodolls). The single can be pre-saved from today and follows the surprise New Year’s Day Spotify release of her cover of Depeche Mode’s Strangelove.

Laura says of her debut, “Life is different for everyone, so Moving Spaces has multiple meanings as we are all moving forward and backwards in life, especially when it comes to love & relationships. You can look at the lyrics from various perspectives and I hope you will be able to relate to it in some way”

Laura Dre’s poignant, but often sexy and thought-provoking electronic and contemporary synth pop, breathes new life into the ever popular and evolving synth and retrowave scene, and indeed into modern electronic pop itself. Influenced by the brooding voices of Shirley Manson and Alison Goldfrapp, Laura’s rare contralto voice is as reminiscent of popular synthwave counterpart Trevor Something as it is PJ Harvey’s.

No stranger to the stage and music business, Dre formed Vinyl Black Stilettos a decade ago with the song The Game being featured on the BBC3-produced lesbian serial drama Lip Service. The Pete Gleadall-produced track Electrical gained interest from Ridley Scott Associates/RSA Films who then went on to produce the music video. She has performed at some of the biggest LGBTQ+ music festivals worldwide and she opened for Kim Wilde at L-Beach.

While the ensuing pandemic has put paid to touring and festival plans, the London/Bremen-based German-Filipino singer and songwriter has already recorded a string of captivating electronic pop songs which will all form part of the debut solo album Moving Spaces, due for release in mid 2021.

You have been making music for a number of years, but what inspired you to adopt a more synthy 80s approach for your debut solo album?

It’s because of a girl I met online (that I like) who is very much into 80s music, which then sparked my interest in going that direction. Without her I wouldn’t have made my album about unrequited love, which I’m sure many people can relate to. I’m a synth lover so it’s a must to have them in all my songs.

You’ve performed at some of the world’s biggest LGBTQ+ music festivals like L-Beach. How did those come about?

Whilst I had my music featured on BBC3’s lesbian drama series ‘Lip Service’, it will all come down to your music, portfolio and live experience. I think if you have proven that you’re serious about music, have great songs and can perform live then it’s much easier to land a slot in big events like that.

Previously, you’ve worked with Pete Gleadall, sometimes referred to as the third Pet Shop Boy. Robert Harder, famed for his work with Brian Eno and Sohodolls is producing your upcoming debut. Why have you chosen to work with Robert?

Robert is a legend and long-term friend of mine and because of the amazing previous work he did on my first EP with Vinyl Black Stilettos, I wouldn’t want to work with any other producer / mix engineer. In my eyes he’s just the best and I feel there is a mutual understanding between us, where I don’t have to say much because he knows what I want. Dark. Sexy. 80s.

The debut title track and single Moving Spaces and its lyric video is a tip of the hat back to 80s gaming. There seems to be a big 80s resurgence in popular culture right now. How do you keep your approach fresh and modern without hamming it up?

I’m not sure whether my approach is modern or not, as I don’t listen to current charts music, I tend to go with my personal taste whenever I compose. Whether it’s current or not will always be subjective. What I do listen to is music from all over the world, from all genres and I tend to go for the more underground and unpopular stuff as there’s lots of good music to be discovered outside of the charts. I also feel that I help unknown artists who are working very hard to get their music heard. I think more people should do the same: explore and discover!

You’re currently based in Bremen, but have also called London home previously. How do you cope with worldwide lockdowns and not being able to tour your new material?

To me this is an absolute blessing! Seriously, without the lockdown I wouldn’t have been able to create my album and I wouldn’t be where I am today. I composed 14 songs within a space of 8 months which is impressive and it’s the first time I made an album instead of EPs. Currently I’m happily working on my second album whilst we wait for the pandemic to get under control. Once that happens I look forward to going on tour, particularly Japan.

Finally, name three items you have in your studio right now.