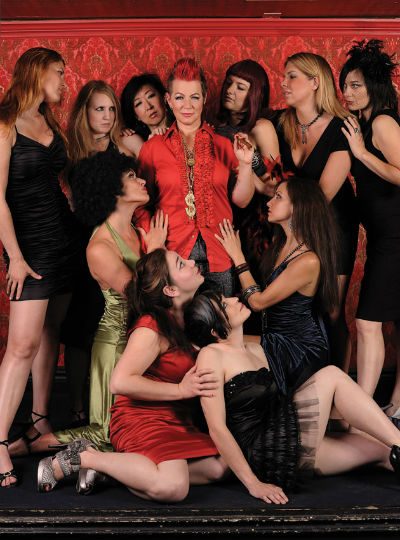 At age 55, this Long-Lived Lesbian doesn’t own a TV and rarely listens to new music.

I’m not au courant with pop culture. For me, picking up Rolling Stone or listening to a music show on NPR is educational, and occasionally confusing. Sometimes I feel that my age keeps me from understanding a certain hip term. When that happens, I ask.

In parts one and two, Kate Reid told LLL about her musical influences and her work as an educator. Here, we learn what “Doin’ it for the chicks” really means.

You’ve got a CD called Doin’ It for the Chicks. I admit that I was baffled by the title, and then more so by the cover. What’s it about?

It’s a satire of any guy who uses women that way! The song “Doin’ It for the Chicks” comes from an experience I had with a guy in Whitehorse, in the Yukon, an American ex-pat. I was doing a three-week tour of house concerts: there’s a company called Folk Routes in Winnipeg that builds circuits around Canada in people’s homes. I go in and play, and it’s like a house party in people’s living rooms, with their friends and family. There’s no sound system, and it’s super intimate.  It’s really fun, because there’s no promotion…

You don’t get paid, but it’s fun, right?

No, we get paid well! There’s no overhead, so whatever’s made at the door goes to the musician.

So, I was flying up to an indigenous community in the northern Yukon, a place you can only get to by plane or a long skidoo ride. Before I left for the tour, Tim, the guy who manages the tour, called me up and said we had a bit of a problem. I knew immediately what it would be. One of the hosts for a house concert was concerned about having me coming to play in his house. He didn’t like the fact that I was a lesbian and singing about it. He was pissed off at Home Routes – he said they should have warned him there was going to be a lesbian in his living room!

So the tour manager asked me to talk to him, and I agreed. So he called me at my house so we could have a chat, and we talked for a while: he mostly talked and I just listened. Finally I just assured him. I said, “Look, a lot of people like my music, not just gay people. Straight guys like it, and straight women like it, and it’s going to be fine. We’re going to have fun.” I basically promised him that nothing strange was going to happen.

But on the way up there on the plane, I started writing a song about all those weird stereotypes that conservative people have about lesbians, like how we want to steal their wives from them, how it’s all about the sex, and all that stuff — that’s where the song comes from.

The song makes fun of all the fears and ideas that people have, and hence the cover. I had T-shirts made that said ‘Doing it for the chicks,’ and lesbians love it; straight guys love it; and then at this one concert a guy came up to me afterwards and said, “I want to buy a shirt for my mom — she’s a chicken farmer. I have a photo of this little girl wearing the shirt holding two baby chicks in her hand.

The CD cover photo reminds me of when Vanity Fair posed k.d. lang with Cindy Crawford. I didn’t really get that one either – were they making fun of k.d. or Cindy? I felt kind of confused looking at your cover, too: am I not cool enough to get this? Was it a satire? Was it a fantasy, that you’d love to have these women crawling over you? Tell me how to relate to this picture.

(laughing) No, no not a fantasy! The photo shoot was really fun, but it’s not my style. It’s just making fun of those men who treat women in that misogynistic way; they use women to make themselves feel masculine, and it makes fun of those kind of albums that over-sexualize and objectify women.