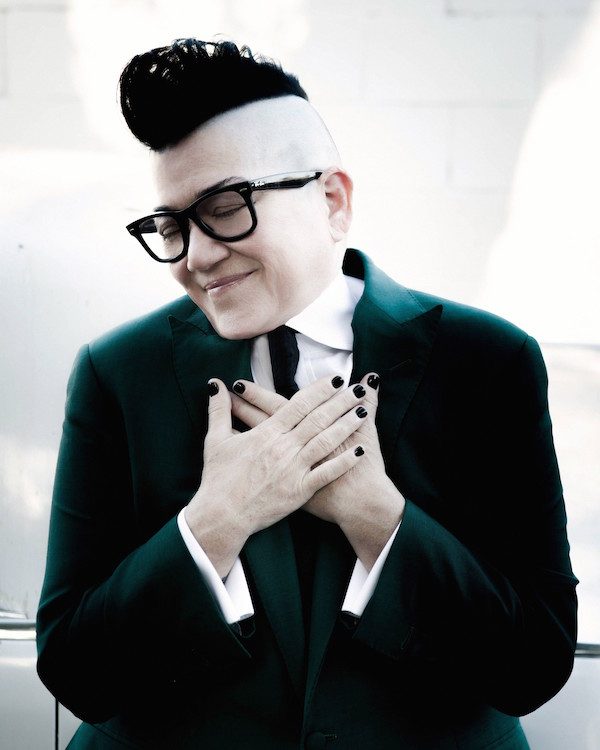 Lea Delaria and her time in Sydney, being a queer media pioneer, and what’s up next.

So welcome to Sydney. How are you finding it, how was your mardi gras?

I’m having a great time, the time of my life!.

I’m not sure about the chain of communications, but someone from your team emailed someone from my team for a list of recommendations for you in Sydney. Did you get that list? (Because I put that together for you!)

No! The ball was dropped in so many ways on that. Samira and I were going “where are all the dykes”. We’re gonna fire somebody.

Obviously you’re here for Mardi Gras with the OITNB cast, and we’re here in the City Recital Hall pending your future show – how have you found your success on OITNB has impacted your music career?

Well I guess I haven’t had a show that wasn’t sold out since Orange hit the air waves. I always sold really well before that, I’ve been moderately famous my entire life. What Orange has done is amplified it, that’s the best way for me to put it. It’s been magnified and amplified in a very strong way. I normally played maybe 200-300 seat houses, now it’s these kinds of houses. But I still do the same thing I’ve always done – in your face dyke comedy and good music, that’s what I do.

So you’re a comedian, you act, and you sing. That’s almost required to succeed in showbiz these days isn’t it.

Well it is if you’re a New York actor, because you’re reliant on Broadway and acting in the theatre. Now there’s a lot of TV. Everyone on Orange is a theatre actor, there are very few LA girls there.

And with things like Netflix now, which produces so many shows all the time

Oh my god! We were the flagship! We’re still the flagship! There are so many I can’t keep up. Samira was talking about some show and I had no fucking idea what show it was! It’s on my network I have no fucking clue! So yeah there’s so many, and so many streaming services.

Do you think your experience trying to make it has been different, being a woman and a lesbian?

Well yeah, you gotta remember I’m a lot older than you are, I’ve been doing this for 30 years. It was completely different for me, I mean I was the only one who was out, so that was a big deal, I had to swim those waters and deal with  the double edged sword of misogyny and homophobia, as well as the internalised homophobia, where even gay people didn’t like me because I was this loud, in-your-face butch dyke. ‘Why d’you have to perpetuate these stereotypes’ coming from these big fucking hulking dykes like…do you have a mirror? All I’m saying is I know lesbians are all shapes and sizes, but we’re this size too, and to put us out in this corner somewhere. I’m seeing our community as accepting nelly fags again which I think is really great, but we still have a little grey area where the butches are concerned.

And the butch dykes are a very visible subset of lesbians and queers.

Yes, and that’s a double edged sword, because femmes have that other thing they have to deal with, where nobody knows they’re a dyke unless they’re draped with a butch. I totally get that too. I’ve been to bars with my best friend who’s a femme and she’s been told “you know this is a lesbian bar” and she’s like YEAH THANK GOD. At least she had a sense of humour about it, but it’s crazy how that stuff happens within our community. I think Orange has helped some, but I hope that some point we reach a point in the queer community where we just accept each other for who we are. I think that has something to do with the fucking alphabet soup, you know, gay lesbian, bisexual, transgender, by the time you say everything the fucking parade’s over. Can we just keep it as queer, because queer encompasses everything and those letters point out our differences. I would rather us just be a queer family and community.

And you’ve been in the business for a while. What’s the trajectory been like, from 30 years ago ‘til now, how has it changed?

Well, they write parts for lesbians now, and actually let lesbians play them. I make fun of lesbian chic a lot but lesbian chic is one of the reasons I got on television in America. They were accepting lesbians, and it was Arsenio Hall because he was black, and also part of this disenfranchised community. They said okay you wanna see a lesbian, here’s one, a real one, and that broke the world. Between my standup and the couch I was on the air for 7 minutes, and in that time I said the words dyke fag and queer 49 times, apparently. Which is awesome.

I don’t think anybody expected THAT queer. People look at Ru Paul, bla bla, then out I came, THAT queer. So that was interesting, having to swim those waters. People kept on putting me in that box where all I did was play PE teachers and police leutenants and again, my life saved by a black man, George C Wolfe was the one who cast me in On The Town – because he didn’t care what I looked like. He cared what I could do, and he saw me be funny, he saw me sing my face off, he said put a wig and heels and a dress on me – which always surprises me, but I’m a fucking actor, I play anything! I’ve played men in the theatre! I can play ANYTHING.

It must’ve been so refreshing to be cast like that.

Oh my god yes! And the best part was my boyfriend was Jesse Tyler Ferguson, and that was in 1997 and we have been best friends ever since. We’ve been inseparable for 21 years now, and then full circle here we both come out on these huge tv shows, playing these iconic gay characters, and all we do is fuck with each other on red carpets.

That’s amazing. And you’ve been a bit of a figurehead for dyke representation for a long time. What’s that like, what does that mean to you?

Well it’s pretty interesting because as a butch dyke people really wanted to sweep me under the carpet, and people would talk about lesbian visibilty they’d talk about Ellen, they’d talk about Rosie, and they wouldn’t talk about me because, I thought, of the butch thing. So in many aspects it’s been a very very hard road to hew, because I’ve had to deal with the homophobia of society as well as my own people. That’s one of the reasons why I do so many things – because I have to be able to do all these things just to pay my fucking rent! But what’s great is what happened with OITNB, not just for queers but for women. They changed the face of TV for us. It really was Orange before anything else that started the women’s revolution on TV, in Hollywood. I’m very proud to have been a party of that. It wasn’t me and Laverne Cox, it wasn’t us. It was the writers and their commitment to creating real and honest and true characters, and their idea of showing us as flawed humans. People are so unused to turning on the TV and seeing themselves. I never saw myself on TV til Orange. The character I play, I’ve never seen on TV before. Episode 4 Season 3, where they did the Big Boo back story, that did for butches what Episode 3 Season 1 did for trans people with Sophia’s back story. That really changed peoples’ perceptions of what it is to be a butch dyke. When I got that script I called up Lauren (Morelli) and said ‘it feels like somebody’s read my diary’. I was actually crying. She obviously did her research. As butch dykes, we have a shared experience that other lesbians don’t have, and every bit of it is in that script.

And that kind of representation, especially for people who haven’t or don’t interact with lesbians/queers, getting that kind of connection, even to a fictional character, goes a long way to reducing homophobia.

You know I get hundreds if not thousands of direct messages every day, and they’re all from young girls. 87% of my 1.3M followers are girls 16-24 years old, and these are all young gay girls, I’m sure of it. I get everything from thank you, you helped me come out to my family, to I can’t come out to my family because I’ll be stoned to death. I take that stuff very very very seriously. I find this a very serious responsibility, to be able to help the next generation along.

It must feel amazing, being able to do that.

Yeah. I know saying that I’m going to get a million more direct messages.

So tell me about the show you’ve got coming up here?

Basically what you guys have seen me do before. I’ll be doing music, and I’ll be doing stand up. I’m currently very upset about the state of the world and especially my country, and I think there are things here that one could be very upset about as well, so I have a lot to say. I’ll be talking about that. My most recent record is called House of Delaria + Bowie = Jazz, and so that’s the music you’re gonna here, because the times are moving, and the #metoo movement. I realised that with all this fame, I can hire any musicians I want, so I should be hiring female musicians, because they’re automatically not hired, just because they’re female. So I am bringing my band, that I call ‘The Future Is Female’, some of the best fucking jazz musicians you’ll ever hear in your life, and they’re all women. We’re on stage just making a big old statement by creating some fantastic music and comedy and that’s gonna be my show. Music and comedy, since the beginning.

And what will you be doing in between now and then, that’s all the way in June?

Just working, I’ve got a few projects. I’m on Shameless now, they just introduced my character a couple weeks ago. I’ll be on Shameless all next season.

It might be surprising to people, but I’m in Cars 3, and I play a character called Miss Fritter, who’s the queen of the demolition derby. She’s a school bus, she’s insane. She’s wild and she’s truly the most fun I’ve ever had. Pixar is amazing, the movie’s really fun. Kid’s love her, maybe because she’s so wild and crazy, maybe because she’s a school bus so they can relate. And she has a lightning bolt rainbow bumper sticker and a nose peirce, and her stop sign is a buzz saw, it’s so much fun. A year ago I would’ve said Big Boo.

Oh, I think we’re being signalled that it’s time but I’ve got something for you. I thought you might want my autograph.
To Lea, my biggest fan, xoxo Liv
You can keep this.

Thanks I like that, that’s really nice. I’ll treasure that.