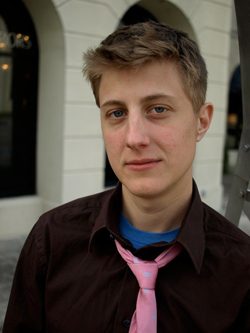 The performance artist talks gender, aerial acrobatics and his show Becoming a Man in 127 EASY Steps.

An avid believer in the importance of storytelling, performance artist Scott Turner Schofield is taking the world—or at least the United States and parts of Europe—by storm. The latest piece in his performance trilogy, Becoming a Man in 127 EASY Steps, tells the reality of gender transition via a choose your own adventure format. On the eve of his international debut, Schofield spills how many steps it actually takes to become a man and sings us his version of John Lennon’s “Imagine.”

What part of your performance do you feel the audience responds to most strongly and what part do you actually most enjoy?

In Becoming a Man in 127 EASY Steps, it seems to be that they respond to two things: the aerial acrobatics and the full frontal nudity.

What made you decide to include [aerial acrobatics] in your performance?

I started seeing it cropping up in the underground queer performance scene and I loved it…. I saw the aerial fabric, it’s one cloth that’s folded in half, so it’s two sides of the same cloth, which you can disguise yourself with, you can climb up it, you can fall down it, and I really think that those are perfect metaphors for gender…. And there’s an element of danger there, too, that was really key I think to the metaphor about being transgender—this place where it seems very, very dangerous.

When you step on stage how do you approach the your performance?

The intention is to tell a story that will knock my audiences’ socks off. So every time I come to the piece fresh because there’s always something new for me to tackle as an actor, as a storyteller, with that in mind. If I can tell the very, very best story I possibly can, I know that my audience is going to trust me and is going to take in what I say.

Why do you feel audience participation is an important part of the work you do?

Becoming a Man focuses on the lived reality and experience of transition. Are there actually 127 steps?

Well, OK, I’ll be honest with you, there are not. But in the show…step one is actually steps one through three. And I did that purposefully because I want the show to be fresh and viable for a long time. As I mature as a person and an artist, new stories will happen. Basically, somebody can see the show 10 times and it will be a completely different experience every time. And the point being, that’s transition, right?

You were a finalist for the Lambda Literary Award in the Transgender and Drama categories for your book, Two Truths and a Lie. What are the truths and what’s the lie?

Obviously, it’s a play on gender, right, two truths and a lie. We have this idea that there are these two truths, that you’re a man or a woman, but that’s totally a lie in itself. And it’s a play on, you know, these stories seem really unbelievable, but they’re really true. So I’m just kinda leaving everybody to guess.

You’ve actually been mistaken as a trans woman rather than a trans man.

Because female to male people blend in so well [and] testosterone is so powerful we just look like dudes. So people just really don’t have a concept of what that means, so if I say to people I’m transgender, people just look at me like, you want to be a woman? And I tell them I was a woman!… My parents have this great neighbor who, she’s wonderful, and we went over for dinner and after dinner she took my mom aside and she said, “Why would Scott want to become a woman? He’s such a handsome man.” [Laughs]

Do you think one is always in transition or do you feel like there is a beginning and an end?

For me it’s a constant. I think we can be more or less aware of the beginnings and ends of different transitions, for instance, the day I decided to change my name was the beginning of something…. Now that nobody would ever, ever think that I ever had been born female, yes, that’s the end of something…. I’m still figuring out what that means and how that works, and so my transition is still taking a long time. It would be so helpful to everybody if we really conceived of our lives as lifelong transitions.

How do you want your audience to perceive you? Or do you feel like you are beyond labels?

I’m getting to the place where not labeling myself will be fine for me, but I’m not that Kate Bornstein-advanced yet [Laughs]. I’m in my own process, but I believe that that is a great place to get to. Now John Lennon’s “Imagine” song is in my head right now. [Sings] Imagine there’s no gender.

You’re going to be writing a new play in February, can you tell me more about that?

I’m researching performance artists who were living with, whether personally living with or engaging with, AIDS in the ’80s…. So I’m kind of working with their ghosts in a way through my research. But what I’m commenting on now is how the economic situation in the United States is making art way harder to do…[yet] we’re finding in both cases really interesting underground grassroots waves of making spectacular art and so that’s what really the play is about.