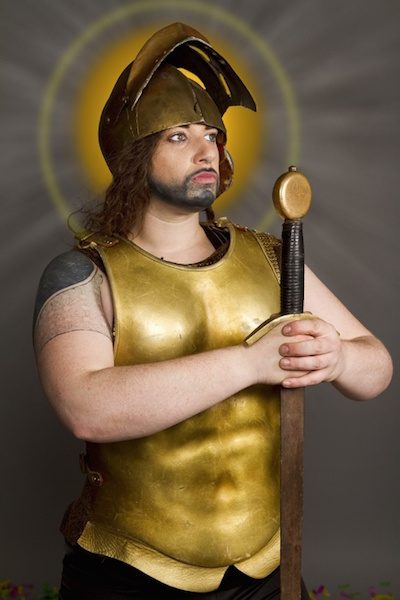 Danielle Mustarde chats to the star of a one-woman show about “gender warrior” Joan of Arc.

In the one-woman, multiple-character show, Lucy Jane Parkinson, plays “gender warrior” Joan of Arc. As well as effortlessly dragging up as the male characters who seek to defy her (including a glittering Charles of Valois!) the play puts a contemporary twist on the traditional story of Joan of Arc, using it as a framework to explore themes of history, gender identity and what it means to stand up for who you are.

With the pizzazz of drag cleverly woven into the narrative, this performance is as funny as it is gutsy. We caught up with 29-year-old Lucy Jane Parkinson, who plays Joan, to find out more.

First of all congratulations on your opening night! Where did the idea for Joan come from?

Joan is such an icon of, not just of femininity, but of being a gender warrior. Her whole legacy came from the fact that she wasn’t allowed to be who she truly felt that she was, which relates to the wider transgender, non-binary, “fluidity” conversation that’s happening right now.

The initial idea was to create a drag king play, so who better to begin with than one of history’s first drag kings?

I think there’s a really strong message about standing up for what you believe in throughout the show, even if you stand out to the point that you’re chastised for it.

How essential was it to balance out the serious elements of the play with comedy?

When you’re talking about something that’s got a lot of weight behind it, it’s important to have those moments of comedic relief because we’re not trying to lecture to people. This is not us saying, “this is how you should think,” or “this is how it is.” You know? Honestly, during the rehearsal process, I was just in bits. Joan’s song towards the end of the play, that was the result of us feeling so crushed by what was out on social media and YouTube, but I think we’ve managed to turn it into an empowering piece.

Why do you think shows like Joan are important?

I had a guy come up to me – 6 feet tall, 6 feet wide – crying his eyes out saying, “I finally think I understand my daughter now, I finally think that I can talk to her now, and thank you, thank you!” You know, and to us, we’ve done our job then. You can’t change everyone’s mind, but you can give them the opportunity to have more of an understanding, of something that can be difficult to get your head around if it isn’t affecting you. That’s why I think it’s important.

Was there a particular gender identity you had in mind when you were creating the character of Joan?

Because I’m a drag king (LoUis CYfer) we used a lot of stereotypical and recognisable angles of masculinity. So you’ve got the camp, “euro-trashiness” of Charles (I love Charles, he’s my favourite!) And then the dad character, who’s a real pastiche of mine and our director’s dads and finally Pierre the judge, with his arrogant “Jeremy Kyle” attitude. So, we took bits from people we knew, things we’d seen on Eurotrash and even Jeremy Kyle!

I loved that Joan has a South Yorkshire accent. Did you consciously keep her northern?

I think the fact that we kept her northern and didn’t push a different accent on her, makes it all a bit more “cuddly”, a bit more inviting. Instantly the audience feel a little more chilled, like “oh she’s northern,” so I think it works in my favour!

There’s a lot of audience participation throughout the show. Are you ever scared that the audience won’t play ball?

I have a tool belt [laughing]. You know, in case someone throws a spanner in the works. I usually just get the audience to gang up on that one person! [laughs]