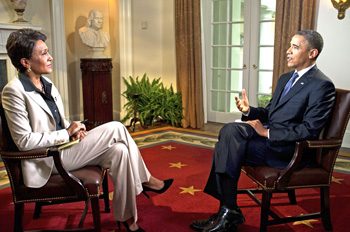 We finally have some change we can believe in. Does the change equal the hype?

As the nation’s LGBT population picked up the champagne bottles off the floor and vacuumed up the confetti and glitter on the day after Obama’s historic announcement, a new, nagging question emerged. With everything that’s been said about Obama’s newfound support for gay marriage, from Republicans calling it a political chess move to bloggers calling it too little (state’s rights don’t count) too late (three-and-a-half years), we are now, finally, and with renewed enthusiasm, asking the follow-up question: Now what?

The polls have tried to answer that question for us. A new Gallup/USAToday poll—initiated the night of Obama’s announcement—reports that 10% of registered Independents were swayed to the left by the president’s revelation. The rest of the poll group, both Democrats and Republicans, admitted that “nothing” has changed, including their vote this November. Democrats are happy Obama said it and agree with him, Republicans are unhappy that Obama said it and disagree. But is “nothing” the right word to describe what happened last Wednesday at 3 p.m.?

When Obama said those magic words, everything was right in the world. Not since the President sang Al Green has his message of love and understanding sounded so good. He said it, we celebrated, and the Democratic campaign got some much-needed financing.

Even with the glitter in the trash and the champagne bottles in the recycling (and the cash being counted at the DNC), I can’t help feeling that glorious afterglow. When the HRC offered me the chance to send Obama a thank you card, I signed it and contributed to his campaign. Now, more than ever, I want Obama, a man who believes in my right to get married, to be my president. But…there’s still that nagging question: Now what?

As the world gets back to normal, I can’t help feeling that Obama’s statement on his support of state-level gay marriage was…wrong. Obama’s personal decision changed the way I view him as a president, and even as a man, but the reality of gay marriage in the United States has not changed, and will not change, until gay marriage is recognized at the federal level. Obama’s announcement was symbolic, but not a campaign promise.

Many have said that Obama’s decision to reveal his support mid-week came on the heels of Amendment One passing in North Carolina, but that only complicates the issue. The day before his legendary announcement, Obama said that North Carolina’s approval of Amendment One was “divisive” and “discriminatory.” If Obama personally believes that the voters of North Carolina made the wrong decision, and, moreover, that every gay person in America has the right to marry, why let the states decide our fate?

There was a time when only less-powerful countries (sorry, Canada) were passing gay marriage at the federal level, but the world is rapidly changing. The United Kingdom and Australia both have federal gay marriage bills in the works, and France’s new prime minister Nicolas Hollande has promised to not only put gay marriage on the ballot, but to make it the priority of his first year in office. Not to mention those “small” countries where gay marriage is already legal at the federal level: Spain, Belgium, South Africa, Norway, Sweden, Portugal, the Netherlands, Iceland and Argentina.

So why not us? Isn’t it time that America, as a united country and not a collection of states, recognizes the rights of all people, and not just those in “progressive” states?

Now that would be a change I could believe in. Obama, we love you. But we’re still waiting.