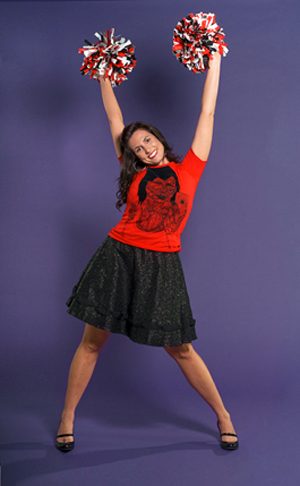 The sharp-witted and outrageously funny Bridget McManus seems to have a finger in every pie. In addition to performing provocative stand-up comedy, McManus is also busy writing blog posts, acting in Web series, updating BridgetMcManus.com, hosting galas and self-help shows, traveling, and filming her popular weekly AfterEllen.com and LOGO vlog Brunch with Bridget, in which she interviews pajama-clad female guests in her bed. McManus dishes about which of these endeavors has been her favorite, how her family reacts to her racy routine, and who she would love to challenge to a pillow fight.

Some would say your routine is rather self-deprecating and seems to be without boundaries. How would you describe your humor?

Without boundaries? Moi? I’ve always been self-deprecating. Growing up with weight issues my classmates made fun of me so I turned it around and made fun of myself. I figured if anyone was going to make fun of me it going to be me and I was going to be the best at it. My humor is dark, defiant, random and has too many musical numbers.

You’re originally from Connecticut and moved to LA in 2003. What prompted this move?

A few years earlier, I had been living in New York City and wanted to pursue stand-up but still hadn’t mustered up the courage. I briefly worked with the comedy troupe Grownup’s Playground at New York Comedy Club in early 2001. After September 11, I stayed in the city but didn’t pursue anything creatively. In 2002, I moved back to Connecticut to be with my family and tried to figure out what was next for me. In May of 2003, I packed up two suitcases, a huge desktop computer, and a guitar and drove cross-country to start my life over. I crashed on my friend’s floor for three months until I found a job. Now, five years later, I’m in the exact place I want to be with my life.

You’ve mentioned performing stand-up into a turkey baster at the age of 4, and that you used comedy to cope with cruel classmates in school, but how did you get your start as a professional stand-up comic?

I went through a lot of turkey basters as a child. In January of 2007, I decided to just go for it. I had been talking about stand-up my entire life and acted as if it was too late to get started. (As if I was a Vietnam vet returning limb-less from war and unable to find love. Is that a stretch?) I compiled a list of open mic venues and I was out at clubs every night of the week trying to craft three minutes of comedy gold. At each open mic, I met more comics who had other projects going on and invited me to take part. My three minute sets became seven minute sets which became headliner sets (at lesbian bars in Long Beach on Tuesday nights). My big break was in December of 2007 while performing at a gay show at Hamburger Mary’s restaurant in West Hollywood. The show was being taped for Comedy.com. My taped set was noticed by Peoplejam.com who asked me to host a new show called Daily Jam. Also, at that event I met producer Andrea Meyerson who cast me in her documentary Laughing Matters: The Next Generation. The documentary is about six up and coming queer comics.

How did the AfterEllen.com vlog opportunity present itself?

In September of 2007, Dara Nai, a writer for AfterEllen.com, contacted me for an interview for an article she was writing about “5 Lesbian Comics You Might Not Know But Should”, which also featured Sabrina Matthews from Last Comic Standing. Two months later, I sent Dara an email to check in since she was new to Los Angeles. I invited her to a show at Comedy Store and she brought her co-worker Karman Kregloe. Unbeknownst me to me they were looking for a substitute vlogger for their hit show We’re Getting Nowhere. Their co-star was going out of town and they needed someone to fill up the couch space. Our episode was so well received that Sarah Warn took notice and asked me to pitch my own show, resulting in the birth of Brunch with Bridget. What could be better than girls in bed with teddy bears and pillow fights?

How did you and your teddy bear co-host Baby Bridget meet?

We met on Craigslist in the Women Seeking Teddy Bear section. Actually, Baby Bridget was my gift to myself for my birthday last year. I was going through a very difficult transition in my life and spent a lot of time soul searching. Baby Bridget was my little companion through my crying fits. Wow! Now I feel like a nut job—ummm—I mean I don’t talk to stuffed animals. Honestly, I don’t!

Who has been your favorite Brunch with Bridget guest so far?

That’s tricky because I LOVE all my guests and I was very lucky that they were all willing to play with me in their pajamas for all the world to see. If I had to pick a “favorite” then it would be a tie between Elizabeth Keener from The L Word and Sarah Warn, founder of AfterEllen.com. Keener was a nut job, who kept removing her clothing for no reason at all, while Sarah pretended to beat me to death with a shovel as I acted like a frightened chicken named “Cocky”. It was a real event that happened to Sarah growing up and another reason why I’m a vegetarian.

Who has been the best pillow fighter?

The best pillow fight was between me and the girls from South of Nowhere, Mandy Musgrave and Gabrielle Christian. We took the pillow fight out of the bedroom and onto the front lawn. We had to edit a lot because our pillow fight went on forever. The audience didn’t see all the goods and I went home with a lot of bruises that day.

Who would be your dream pillow fight competitor?

My dream pillow fight competitor would be Ellen DeGeneres. That might be an obvious choice, but I really want to beat her with a pillow and then challenge her to a dance off, which she’d most likely win.

How do your family, friends and partners feel about being used as ‘real-life humor’ material in your routine?

That’s a great question! I write a lot of jokes about the people in my life because I think the truth is funny and sometimes heartbreaking, which can be even funnier. I always run my jokes by my victims—I mean, my family and friends. The jokes that in my act are the ones that were approved. You should hear the doozies that didn’t get clearance—they are a hoot!

Why is your blog entitled ‘Comedy Double Standard’? Is it more challenging to be a female comic or a lesbian comic?

When I first started performing stand-up, I went around town to all the open mics including the Laugh Factory in West Hollywood. The rule for the open mic was “no swearing,” a rule I abided by. The male performer that went on before me made a joke about how “well hung” his mentally handicapped brother was, with no backlash. When I took to the stage I did my set omitting the swears, and said the word “penis.” The owner immediately asked me to leave stage and return with a “clean” set. I was stunned and really embarrassed. My friends tried to cheer me up by taking me out for sushi and we all sat in silence as I cried into my California rolls. That night I went home and started my blog “Comedy Double Standards.” Most careers are male dominated and stand-up is no different. It’s really difficult to be a female comedian let alone a lesbian comedian. And no one wants to laugh at a ‘pretty girl’ – they figure “What does she have to complain about?” to which I respond, “Have you met my mother?”

What was your role in the movie Wanted?

For 2 1/2 years I worked on the production side of Wanted, assisting the executive producer of the film. At 2AM on the last shoot day in Chicago, I was hiding out in the producer’s trailer and the director of photography Mitch Amundsen told me I must become “the checkout girl,” a coveted role. (Please know I’m being sarcastic.)  In the film, James McAvoy is purchasing an obscene amount of jars of peanut butter and I’m his cashier. We did it a couple takes as James and I bantered back and forth and the end result is me onscreen for 10 seconds scanning peanut butter in silence and one shot of the back of my head. My mother is so proud!

Are you pursuing an acting career?

I would love to do more acting roles. I currently play a recurring role as Rhonda the Rapid Delivery in the Web series 3Way. I studied drama at New York University’s Tisch School of the Arts, so I’d like to get as much as possible out of my degree before I resort to selling it on eBay.

The year 2008 has been busy for you: a hilarious blog, weekly Brunch with Bridget vlogs, acting, traveling, guest appearances on other AfterEllen.com vlogs, trips to emergency, collaborations with Karman Kregloe, tattoo sessions, etc. With so much going on, which of these endeavors is your favorite?

The tattoo was definitely not my favorite. I screamed like a bitch the entire time. My favorite part of 2008 thus far has been traveling with the AfterEllen.com crew and hosting the meet ups. Whenever we are in another city or country, Sarah organizes a meet up so all the girls that read the site can get together. I just came back from France where we had two meet ups, one in Paris and one in Lyon. The turnout was amazing and there were so many different kinds of girls, all brought together by the AfterEllen.com bi/lesbian community. It just reinforced that, “We’re here. We’re queer. Get use to it.”

What are your plans for the future?

I desperately need to get an oil change but after that I’m hosting Daily Jam, a self help show on Peoplejam.com…and I’m guest-starring in a Web series for Warner Brothers called Joni & Susanna on theWB.com.