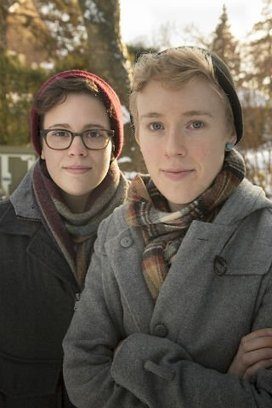 The twosome bring refreshing simplicity to the neo-folk revival with their pure vocals, close harmonies and honest lyrics.

The duo breaks the acoustic mould by peppering their songs with trumpets, cellos, mandolin and percussion.

Drawing inspiration from classics like Joni Mitchell and James Taylor, Hannah & Maggie have a timeless sound that The Deli Magazine calls “The blue-eyed soul of folk-country.”

Hannah Hickok and Maggie Kraus met in 2009 while singing in their a cappella group at Smith College.

The following year, they entered a songwriting contest together, which inspired them to continue working as a twosome.

They released their debut album Fine Being Here in 2011, followed by their sophomore release Muscle & Bone, released in 2012.

Both albums earned widespread attention throughout the blogosphere, helping them to gain a large following of dedicated fans.

As open LGBTQ musicians, Hannah & Maggie have solidified themselves as role models within the LGBTQ community.

With a sound that Music Dune calls “comforting” and “beautifully familiar,” Hannah & Maggie are sure to win the hearts of folk, acoustic, and country lovers alike.