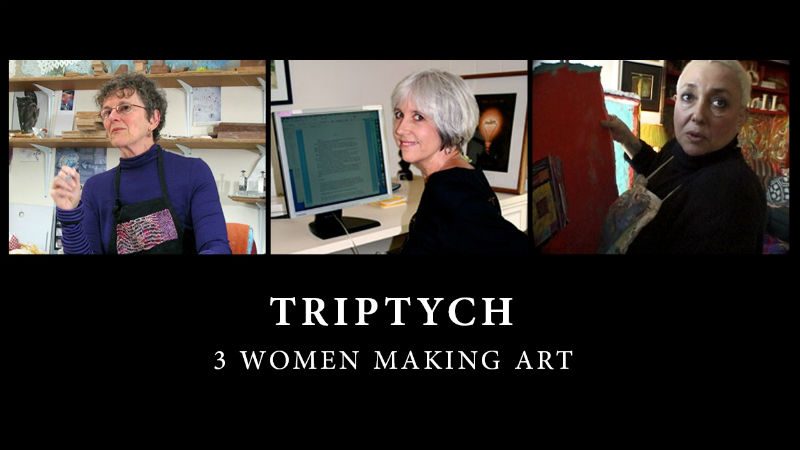 It didn’t matter to me what the angle was, as long as we were making a good film.

On Jan 10, 2015, Pam Walton  and partner Ruth Carranza attended the gala awards assembly of San Jose CreaTiVe, a nonprofit media center. Their recent film, Triptych: 3 Women Making Art, was nominated for the 2014 “feature filmmaker” award for a film of more than 30 minutes – and it won!

Ruth Carranza and Walton are partners in work and life – they are married, and together they work as associate directors of Pam Walton Productions. Here, Walton talks about lesbian identity and aesthetics.

Congratulations on the award. How else has the film been doing so far?

The CreaTiVe award was a meaningful community award, and we were thrilled. It meant a lot to us.

Otherwise, so far, I’ve been a bit surprised in that we’ve not yet had great luck with festivals. We have been expecting Triptych to get into the women’s film festivals, but the one we’ve heard back from so far didn’t choose to screen it.

But we’ve got a distributor — New Day Films is distributing it, and we have sold several copies without any promotional efforts at all. We’ve sold them to educational groups, and we’re thinking that that will be the film’s strongest market: in educational/women’s studies/arts culture.

How do feel about being called a “lesbian” filmmaker as opposed to just “filmmaker”?

It’s appropriate, and I do like it. I will say though that my work has migrated from gay issues to other things, such as ageing and mainstream politics. Back in 2004, we were convinced that Bush had stolen the election again, so we made Grassroots: Contesting Ohio.

How does being lesbian inform your filmmaking?

In the beginning I saw it as a plus. When I was in Stanford’s documentary film program, I thought I’d pick out my niche and compete just in the gay and lesbian area. It was an advantage. I had a lot of luck with gay and lesbian film festivals. We won Best Documentary at a GLIFF in Austin and at the Santa Barbara GLBT film festival. And we’ve had a broadcast on Here!TV and Logo, MTV’s gay/lesbian channel.

But as happens to a lot of people, as we moved on, got older, and widened our perspective, it didn’t matter to me what the angle was, as long as we were making a good film.