Teri Polo and Sherri Saum take pride in playing family in this year’s most anticipated lesbian series, The Fosters.

“Sherri definitely has better lips than he does,” says Teri Polo, comparing her new TV wife to Ben Stiller, her former husband on film in Meet the Parents and its sequels. “And she’s far more beautiful than he is.”

Even Stiller couldn’t argue with that.

Lena is a high school vice-principal, the kind of educator whom girls and boys could definitely get a schoolyard crush on. Stef is a cop with a teenage son, Brandon (David Lambert). Together, Stef and Lena are raising Brandon and two children they’ve adopted. In the pilot episode, Lena brings two new children into the Foster household, “temporarily.”

The Fosters was created by Brad Bredeweg (Fly Girls) and Peter Paige (Queer as Folk). Centering around a lesbian couple and their multiracial family (they have foster, adopted, and natural children), the show might be venturing into new territory for nighttime TV, but blended families are not a foreign concept to people in the gay community.

The lead actors, along with executive producer Joanna Johnson, spoke to Curve during the first week of shooting in April. The first episode picks up where the pilot left off, on the day after the streetwise Callie (Maia Mitchell) comes to the Fosters’ home.

“I’m married to a woman and we have two children,” says Joanna Johnson (Hope & Faith). “It was a great opportunity to write about my life, my own experiences, which the guys [Bredeweg and Paige] captured in the pilot. I’m just so grateful to have the opportunity to come on board and to help them, creatively and as a producer, with the show.” 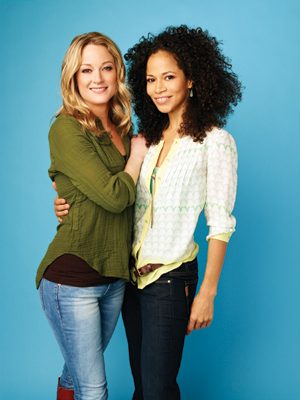 Ironically, Polo, a straight woman with two children, says she’s more comfortable playing the part of Stef than she’s been in any other role. “I think this is the closest to me I’ve ever played in my life, as a mother, as someone who loves someone else and has feelings for someone else,” she says.

When Sherri Saum arrived to read for the role of Lena, she expected something different from what she’d experienced portraying heterosexual characters. “I thought, ‘Ooh, this will be an edgy, kind of cool thing to do.’ But really,” says Saum, “it’s just absolutely the same—so many of the obstacles, the same challenges, the same kind of love. It was kind of a lovely little surprise. I think if people give us the chance, they’re going to discover exactly the same thing.”

And that’s one of the messages of the show, says Johnson, who is best known as an actor on The Bold and the Beautiful, but whose life is more in sync with the moms on The Fosters. She and her real-life wife, Michelle, have two adopted children. “We are going to tell stories about the marriage and the relationship of these two women, not just from the gay perspective but from the being-married-and-having-kids perspective,” says Johnson. While Teri Polo has enjoyed feature film success playing Ben Stiller’s girlfriend and spouse, this role, as a cop on The Fosters, is her dream job. She’s never played a lesbian before, but she believes that’s irrelevant. “If you love someone, you kiss them and you hold them and you touch them, and sometimes you fight with them, and it doesn’t matter if the person across from you is male or female,” says Polo.

Saum agrees: “I’m loving Stef Foster in a way I would love anybody. It’s no different to me. If someone out there has a criticism about how I portray a lesbian, that would be kind of strange for me.”

The kids in The Fosters are being brought up in an atmosphere of love as well, and that’s what Saum believes matters the most. “I feel people are people, and I’ve always been clear that love is love,” says Saum, who was a psychology major before taking up an acting and modeling career in New York. “I grew up in a household where we were given so much self-esteem. I really grew up with a sense of self-worth. And I can see the difference in children that didn’t have that advantage.”

“For ABC Family to embrace this show and want to tell this story is just amazing,” adds Johnson, who’s seen great advancements since her days as a soap star in the ’80s and ’90s. “It’s much more brave to make a real-life drama. The Modern Family show is great and I love it, but they’re funny gay men, and they’re kooky and eccentric and ha-ha—as long as you can laugh at the gays, then we’re all comfortable.

“A drama, [like this show] is about raising kids and a family, and says, Look, it’s exactly the same issues you have in your family.”