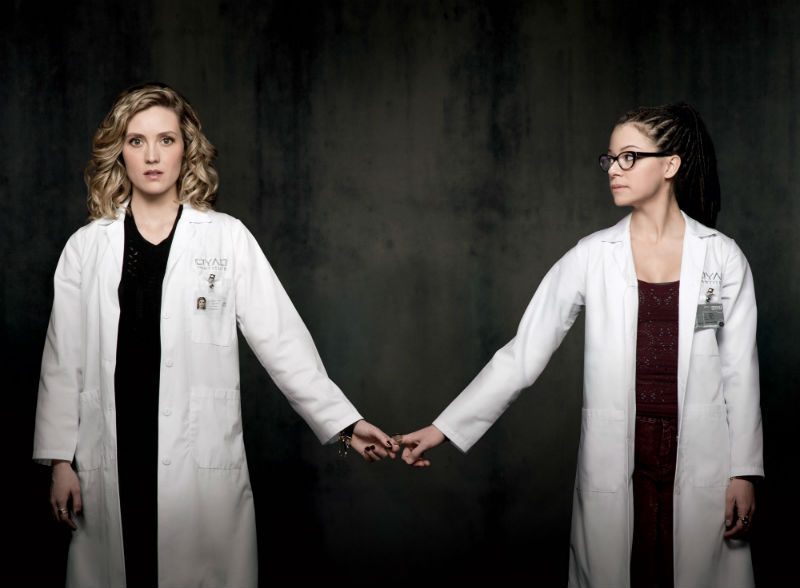 *SPOILER ALERT* If you haven't seen the first four seasons of Orphan Black, proceed with caution!

As a queer, female television viewer, it is an incredibly rare treat to discover a series that champions the stories of women, and that represents queer women as complex characters who are comprised of more than just their sexuality. It’s an added bonus if the show is actually compelling.

Perhaps surprisingly for those unfamiliar with sci-fi television, the sci-fi genre has historically been at the forefront of providing audiences with progressive depictions of queer female characters. Maybe the ‘unreality’ of science fiction attracts a more open-minded, and thus more queer-friendly, audience. Perhaps the transgression inherent in messing with the ‘laws of nature’ in science fiction has provided opportunities for clear parallels with gender role subversion in queer relationships. Either way, you can’t argue with the evidence. Sci-fi and queer ladies go together like Kristen Stewart and slouching.

The obvious canonical example is Joss Whedon’s Buffy, which brought us lesbian icon Willow Rosenberg. While Xena the Warrior Princess’ queer sexuality was not explicitly confirmed by the show’s creators until last year, her relationship with sidekick Gabrielle was so gay they may as well have been wearing matching flannels. And Wonder Woman grew up in an all-female, Amazonian society… Like, you do the math.

While these shows cumulatively spanned from 1995 – 2003, it seems we are now experiencing a queer sci-fi renaissance. From lesbian vampire web series Carmilla, to the queer ladies of post-apocalyptic drama The 100, to the queer fluidity of the Wachowskis’s Sens8, queer women in sci-fi are again on the rise.

What we might argue is the piece de resistance of this resurgence is Canadian mastermistresspiece Orphan Black. Orphan Black premiered on March 30, 2013 to critical adulation, and has slowly built up a huge cult following. This year on June 10, it will embark on its fifth and final season. The full trailer for Season 5 has just been released.

Orphan Black is ostensibly a story about several identical women who soon find out that they are in fact clones (all played by the wonderful Tatiana Maslany), and then have to work together to ensure their survival and get to the bottom of their origin.

However, Orphan Black is far more than this. Crucially, it is about strong, complicated women collaborating, loving each other despite their huge differences, and grasping on tightly to the autonomy that others constantly try to wrestle from them.

From a queer perspective, it gives us clone Cosima. Cosima is a scientist, completing her PhD in Experimental Evolutionary Developmental Biology. She is a fierce protector of her fellow clone ‘sisters’. She is whip-smart. She is also gay.

Cosima’s sexuality is presented without fanfare or explanation. Her relationship with the beautiful and similarly brilliant Delphine is treated with as much care, attention, and complexity, as the relationships between the other clones and their heterosexual love interests.

While fans feared that Delphine would fall victim to the infamous ‘Bury Your Gays’ trope when she was shot in Season Three’s finale episode, she was thankfully revealed to be very much alive in the final episode of Season Four.

Cosima, whose ambiguous illness has come close to killing her basically every episode, may have also whipped herself up a cure, if Season Four’s promises can be believed.

So what can we expect of Season 5? The promo that featured on BBC America gave us all our favourite ‘sestras,’ vowing to stand together and to fight.

Cosima says that she fights “to love whom we choose.” There is also one moment in which Sarah’s child, Kira, seems to yell, “I can’t feel her anymore!” This is obviously terrifying, because the implication is that one of the sisters has passed away. We love them all, but by gosh, if they kill Cosima and deny her a happy ending with Delphine, there will be to hell to pay from the queer community.

As if sensing that queer viewers are on edge, the Orphan Black team also Tweeted a teaser clip taken from a new BBC America brand commercial, which does not feature in the Season Five trailer. This clip appears to show Delphine and Cosima walking hand in hand, dressed in what are seemingly – gasp – wedding clothes! Cosima looks dashing and hot in a tux, while Delphine wears a floaty white dress. The show is known for its twists and turns, so these clothes may turn out to be a red herring. But they also might not be!

Either way, buckle up and prepare to tune in. If you’ve somehow missed the brilliance that is Orphan Black up until now, you still have more than a month to binge watch the first four seasons.

And if you finish in record time, may we suggest that you give another Canadian sci-fi show with a queer lead a go? Lost Girl follows the many adventures of a bisexual female succubus who feeds off sexual energy and often makes love to a stunning female doctor, among others. Bless the Canadians.