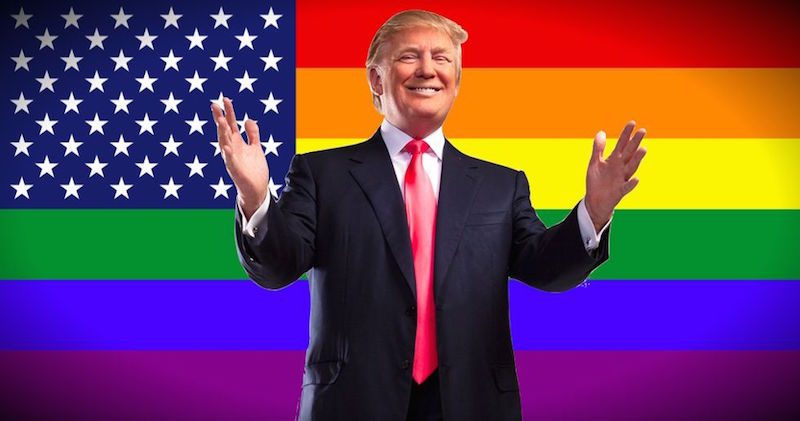 The New York Times delivered a rebuking editorial to the Trump Administration: “The LGBT Trump Fallacy“. The editorial was predicated upon what the majority of LGBT people knew during the 2016 election: that Donald Trump, presidential candidate, was being dishonest when he claimed he would be “better than Hillary Clinton” for LGBT people.

Clinton had decades of supporting the LGBT community on her resume. She is the only First Lady to ever walk in a Pride parade, which she did in 2000.

She also walked in the 2016 Pride parade–which Trump did not. In 2011, then-Secretary of State Clinton became the highest-placed government official in the world to declare that “gay rights are human rights” in a long speech delivered in Geneva on human rights abuses against LGBT people worldwide.

From Trump there were only presumptions that somehow, because he was a native New Yorker (Clinton was a two-time senator from New York and has lived there since 2000), he would be more open to LGBT issues than previous Republican candidates. But the 2016 GOP platform was one of the most oppressively anti-LGBT ever, and despite Trump’s then-campaign manager Paul Manafort working to change the platform’s language on Russia and the Ukraine, no such last-minute efforts were made to make the anti-LGBT language less Draconian.

The New York Times editorial only addressed a handful of issues that have been raised during the nascent Trump presidency. It did not note, for example, that gay men are being rounded up, incarcerated in what have been termed concentration camps, tortured and even killed in Chechnya, according to Amnesty International and a host of news organizations from the New York Times to the BBC.

The New York Times did not mention that when U.S. Secretary of State Rex Tillerson visited Russia last week, there was no statement from either him or President Trump on these egregious human rights violations six years after then-Secretary of State Hillary Clinton’s historic statement on gay rights.

Nor did the New York Times mention that the very first change it made on Inauguration Day was to dismantle the LGBT page on the White House website. Nor did the editorial address that President Trump had campaigned for several openly anti-LGBT candidates, most recently Ron Estes, who on April 11 narrowly won the Kansas congressional seat vacated by Mike Pompeo (also anti-LGBT), who Trump appointed to be director of the CIA.

Pence demands his own editorial, but as the second in command in the Trump Administration, Pence should have received near-equal billing by the New York Times, since Pence’s hand is the one guiding and bolstering Trump’s negative and dangerous stances on LGBT issues.

Sheila Suess Kennedy, who ran against Pence in Indiana for the congressional seat Pence ultimately won in 2000, told the Guardian newspaper in October 2016,

“He is convinced that God doesn’t like gay people and that’s it.”

Kennedy referenced the religious freedom bill Pence got passed in Indiana at a time when the entire nation was moving forward on same-sex marriage and Pence was seen as a dinosaur whose time was coming to an end.

Yet Trump chose Pence for vice president–and it was a choice urged on him by his daughter Ivanka and son-in-law Jared Kushner, who are both alleged to be the “liberal” voices in Trump’s inner White House circle.

Trump had wanted to choose Gen. Mike Flynn for his vice president. Flynn has since been revealed to have had ties to Russia and been a foreign agent for Turkey while he was working for the Trump campaign.

As part of Pence’s various congressional campaigns prior to his run for governor of Indiana, Pence wrote that same-sex marriage would destroy America’s social fabric: “Societal collapse was always brought about following an advent of the deterioration of marriage and family.”

Pence asserted throughout his ten years in the House that Congress should oppose same-sex marriage, oppose efforts to give LGBT people legal protections from discrimination and stop giving federal money to Planned Parenthood or HIV/AIDS groups that “celebrate and encourage the types of behaviors that facilitate the spreading of the HIV virus.” He has also been the nation’s most vocal proponent of conversion therapy to change the sexual orientation and/or gender identity of LGBT people. It’s easy to see Pence’s mark on the Trump presidency–not the much-vaunted “liberal” imprint of the New York glitterati couple, Ivanka and Jared Kushner. In fewer than 90 days, Trump and his cohort have rolled back nearly every advance in LGBT rights put forward by the Obama Administration that did not, like the marriage equality ruling, come from the federal courts. These actions have emboldened the states to push for more “bathroom bills” and other anti-LGBT discrimination, particularly in employment and public accommodations.

Last month Texas, the second most populous state, put forward its own “bathroom bill” which goes much further than North Carolina’s HB2. The Texas law is so broad, according to the Dallas Morning News, it would also gravely impact women in employment and other areas.

Pence has also been a proponent of the Religious Freedom Restoration Act (RFRA). In 2015, Pence signed his own RFRA into law in Indiana, despite controversy and vociferous objections from LGBT groups. These laws are specifically designed to impact LGBT people and allow discrimination predicated on a claim of religious belief.

In 2014 in the Hobby Lobby decision by the U.S. Supreme Court, the conservative majority expanded the interpretation of the law to include corporations. RFRA laws allow individuals and companies to assert that their exercise of religion has been, or is likely to be, curtailed by pressure from LGBT people in hiring, public accommodations or other services.

Thus businesses can use religious beliefs as an excuse for refusing service to LGBT people or even hiring. Lesbians and trans women have been particularly impacted in employment because of these laws which have also been applied repeatedly to justify firing of LGBT people. Lesbians who teach in Catholic schools are increasingly victimized by this application of these RFRA laws.

While we always applaud the mainstream media noticing the existence of LGBT people and the discrimination and intimidation suffered daily by lesbians, gay men, bisexuals and trans women and men, the New York Times’ must be called out for its failure to mention the most egregious member of the Trump team – and the person most likely to take Trump’s place should those rumors of impeachment turn into reality: Vice President Pence.

Pence is currently in South Korea, ginning up a war with North Korea and stating that the U.S. has lost patience with the rogue nation. This is the kind of intransigent and undiplomatic “tough talk” Pence is known for and which he has used against LGBT people for over two decades as a legislator and a governor. He is known not for making American great again, but for a studied effort at waging a culture war against LGBT people and women.

Indiana University professor of public affairs, Leslie Lenkowsky, was quoted by the Guardian on Pence, explaining that his support of extreme cultural perspectives is part of his attention to those white working class Trump voters who have become the darlings of the mainstream media since Clinton lost Pennsylvania, Wisconsin and Michigan by less than one percent and 77,000 votes due to those voters. Said Lenkowsky, “[Pence] is defending those who he feels, whose voice he feels, doesn’t get sufficient attention in the national political debate.”

It is the vice president’s role to reflect the views of the president, but as has been noted time and again, Pence’s views on everything from the Muslim ban to Syria to LGBT rights has differed widely from Trump’s stated views on those issues. And since Pence seems to retain his same points of view for decades – as he has on LGBT issues – while Trump’s views shift week by week, the New York Times might well have focused on Pence rather than Trump as it’s apparent who is guiding the administration on LGBT issues.

Which is, as the New York Times expressed, bad news for LGBT people. But in eliding Pence from the denunciation, the New York Times may well have excused the most virulently dangerous voice within the administration and the one of whom we should all be most wary.