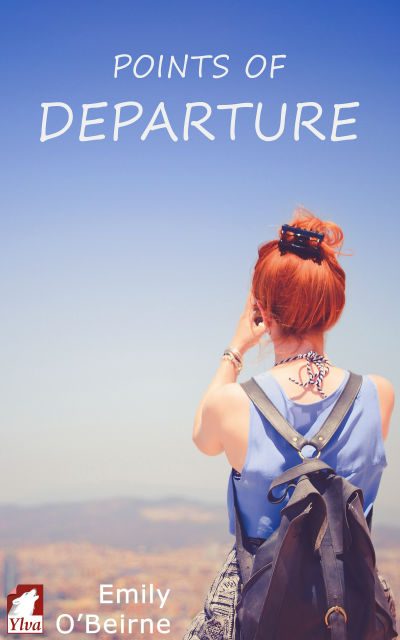 It’s not the journey but who you’re with.

Emily O’Beirne has recently published two YA novels in her “Story of Now” series, and I thought both of those were excellent. “Points of Departure”, her new YA novel, is even more of a gem. It’s a stand-alone tale, not related to the “Story of Now” series, and it’s even more ambitious than her earlier works as it features no less than four main characters’ points of view. What might have seemed a daunting prospect to write (and possibly read), is achieved brilliantly with an effortlessness that is amazing to experience.

Kit, her cousin, and three of her friends were supposed to go on a four-week trip around Europe in between finishing high school and starting university. However, days before they are supposed to depart, Kit—who has a reputation for making very bad decisions—discovers she is penniless and unable to take the journey. The other four young women decide to go anyway, even though their only connection to each other is Kit. What follows for each of them, and for Kit, who’s left behind, is a coming-of-age story that will resonate with many readers for a variety of reasons.

Liza is newly out as lesbian to her parents, and Kit, but no one else. She’s looking for a little adventure, possibly the chance to have a little holiday fling, and to make some decisions about how she wants to spend the next few years. Olivia has a secret she doesn’t want to share—she’s possibly flunked her final exams and won’t be able to do the law degree she’s been expected to do since, like, forever. Tam wants to be a chef and is all booked up on some cooking courses at the end of the trip, but is loath to leave her father, who’s recovering from cancer. And Kit has to find a way to earn some money back at home, and fast, so that she can kick-start her life again. She’s determined not to make so many stupid mistakes anymore. The fifth girl in the group, Mai, does not have a point of view, but instead has interactions with all the other characters that are crucial to the story.

This is, quite simply, one of the best books I’ve read this year. I literally couldn’t put it down, staying up until way past my bedtime to finish it because I just had to know what happened to each of them. There is teenage angst, romance, arguments, tension and heart-warming friendship. All of which is utterly believable and uncontrived. The locations are all clearly places the author has visited and loved, and they are described beautifully. All four main characters have their good and not-so-good qualities, but I loved them all. And all four of them have distinctive voices; there is no blurring at the edges. That takes great skill and O’Beirne pulls it off spectacularly.

All I can say is, if you’ve never read YA before, start here.