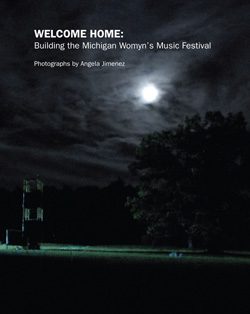 Every year thousands of women flock to the Great Lake state for the Michigan Womyn’s Music Festival, a weeklong event organized by women for women and with only female performers belting out lyrics on stage. While for most the festival is only one week out of every summer, hundreds of women spend upwards of a month out on the land building the festival from the ground up because every year the festival is torn down, leaving the land as close to how it was found as possible.

Up and coming lesbian photographer Angela Jimenez spent five years documenting this huge undertaking and in the process found herself part of a community of women she never knew existed. In an attempt to show the world a part of the famous festival that goes mostly unnoticed, Jimenez put together a collection of photographs she took between 2003 and 2008.

“The worker crews are really at the heart of it and it’s a really important part of herstory that’s been happening for 34 years and I just felt like this is a story that we need to know,” says Jimenez.

Her self-published book, Welcome Home: The Michigan Womyn’s Music Festival was sold at the festival this year and is now available on her website (angelajimenezphotography.com).

Jimenez shared 10 of her favorite photos from the festival and the stories behind them.

“I started doing this project totally as a photographer and then I joined the carpentry crew and was a total beginner,” Jimenez says of her experience helping to build stages for the festival. “In the all-women environment there’s a really tough work ethic, but there’s also an openness to learning and not knowing, like admitting that you don’t know and that not being a weakness. So for me that crew was a wonderful place to try something out that I might never have tried out in any aspect of my life.”

These women are members of multiple work crews gathering together to help raise the Night Stage, where musicians play to thousands of women every year at the festival. “They build individual frame sections of the stage and then women line up and there are about—depending on the size of the frame—maybe 30 to 40 women on each frame who lift it and carry it into place,” says Jimenez, who describes the stage raising as being “one of the most ritualistic and symbolic processes that I saw happen out there, it’s very beautiful, it’s very orchestrated.”

Chris, who has been coming to the festival for years, and her partner Gloria are playing cards in what Jimenez described as “the gayest picture ever,” saying “I just love the rainbow motif and you know just feeling like she’s been doing this for years, like she’s got lots of stories, lots of perspective, I feel like you just see that in her.”

“I think that one of the reasons that I was so visually taken with the worker process is that there are so many demonstrations all around you of the strength of the female body,” Jimenez says of her time working side by side with women who work in traditionally male-only fields. “When you see that strength and you’re around the assumption that women are capable and that they’re powerful and that they’re knowledgeable it’s striking…being out there around this process is inspiring because you see all these empowering symbols of womanhood.”

“For whatever reason Lorraine once dressed as a nun, you know, where else can you do that? You don’t get that many opportunities so you gotta seize the day,” Jimenez says of the openness of the festival where many people dress up in costumes and role play. “Some people loved it and some people probably hated looking at it, depending on your experiences in Catholic school [laughs].”

In deciding to document the worker process at the festival, only a few pages of her book contains photographs of the many well known female artists who perform at the festival. “It’s not an encyclopedia, it’s not a comprehensive book, it’s more of like a poem; it’s the essence of what happens out there,” Jimenez says of the scope of her collection of photographs. “Amy Ray is getting ready for a performance on the Night Stage. It was like a disco set; she’s practicing a song that she’s going to perform that’s very outside her genre,” Jimenez said that as a festival photographer she had the privilege of being able to go backstage while musicians like Amy Ray prepared for their sets.

“Lez Zepplin is a Led Zepplin all-female cover band and they rock,” Jimenez said of this powerful picture. “This is kind of like the fulcrum of the book, it’s leading up to that moment of this women being on the stage wailing on a guitar.”

Mauve was part of the opening ceremony of the festival where music is played and festival workers perform a “ceremonial, ritual” dance. “I’m kind of documenting my elders and a movement that was started at a different time, like Michigan was founded in 1976,” Jimenez said of why she was drawn to take pictures of the older generations of festival workers.

“For me, being out at the festival and spending the whole month in this environment, I could explore myself, learn new things, form new relationships, meet new people” Jimenez explained. “People get really close and form bonds that feel like family. On the whole there’s a sense of belonging to something and a sense of being connected to each other and I think that’s the other reason I chose to photograph the workers, because when you say that you’re building the festival, yeah you’re physically building the stages or the structures, but you’re also really building a community through the process of that shared experience and a shared purpose.”

“The bond fire happens after basically after every structure on the land has been deconstructed and they only burn wood that is no longer usable, I mean everything gets recycled, everything gets reused,” Jimenez said. “One of the wonderful things about the festival is the worker’s commitment to returning the land to its natural state, Jimenez says. “You dig back up the electrical things, you dig up the plumbing, you build this entire little town and you tear it all the way back down, bury everything, clear everything away, return it to how it was and then winter comes and it’s a real conscious part of the process.”