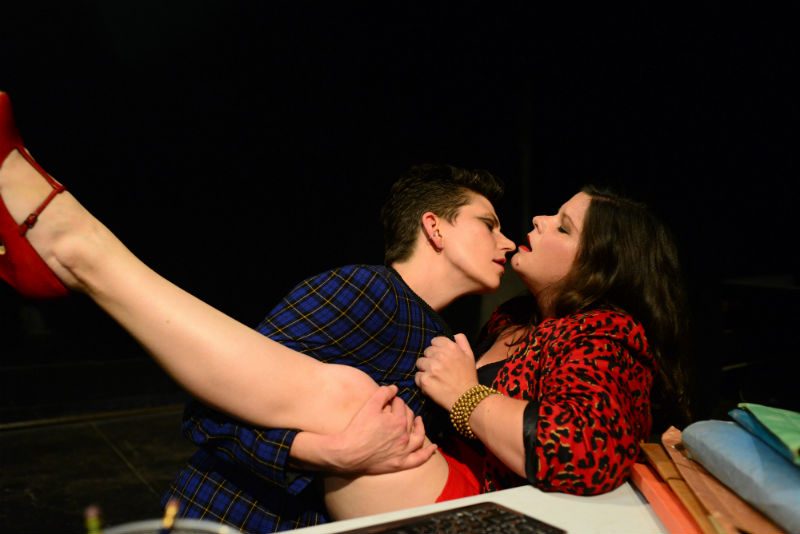 If the August heat in Philadelphia makes you want to go on a murderous rampage, you’re not alone: there’s a group of lesbian secretaries in South Philly with that very same feeling. We’re talking, of course, about the characters in the Five Lesbian Brothers’ outrageous comedy, The Secretaries, which opens August 10 as part of Quince Productions’ GayFest! – Philadelphia’s LGBT theater festival that celebrates its fifth anniversary this year.

This year’s GayFest! will take place at Plays & Players (Skinner Studio) and Studio X. There will be a total of almost thirty performances, as those bloodthirsty stenographers are joined by three other plays. The first to open is At the Flash, which traces five decades of a bar’s history through five characters: a lesbian activist, the bar owner, a closeted married man, a club kid, and a drag queen.

The catch? They’re all played by a single actor. In Mother Tongue, a young man tries to form a relationship with a 40-something under the dubiously helpful eye of his standup comic mother, while From White Plains is a dramatic tale of bullying and forgiveness. These three plays all take place at Plays & Players Theater.

But what about those homicidal secretaries? Studio X will be splattered with blood in this tale by the renowned Brothers (Maureen Angelos, Babs Davy, Dominique Dibble, Peg Healey, and 2015 double Tony winner Lisa Kron), who are well-known for such other plays as Brides of the Moon and Voyage from Lesbos. In this madcap story, something is amiss in the town of Big Bone, as a gang of murderous lesbian secretaries at the Cooney Lumber Mill initiates its newest member.

Says cast member Amber Orion, a returning GayFest! veteran, “The Secretaries is a biting satire masquerading as a bawdy sexploitation piece. Here are these women, treating each other and themselves in absurd ways about food, weight, appearance, and sexuality — when really everything they’re saying is just society’s expectations laid bare. The playwrights have crafted an indictment of the heterosexual male gaze, as well as the stereotypical ideas of what women do when we’re alone together.”

There’s much more to this play than meets the eye, and in its comic subversion it eviscerates some outmoded stereotypes of lesbians. Says Orion: “The concept that lesbians are predatory — stopping at almost nothing to get a straight woman into bed — is unfortunately what a number of people think.  By depicting all of this in such a graphic manner, you end up with a truly scathing commentary, and a hilarious one at that.”

In addition to these plays, GayFest! continues its tradition of “one night stands,” one-time only performances designed to show diverse aspects of LGBT work and all playing at Studio X. One that’s of particular interest: Devil’s Dance, a workshop production of Chelsea Sanz’s tale of an unlikely meeting.

After a bike crash on the winding roads of Ireland, Sam finds herself stuck in a downpour with nowhere to turn, when she meets Kelly, manager of a secluded pub that resides at the edges of the sea. Performed originally in New York’s Fresh Fruit Festival, Devil’s Dance, according to playwright Sanz, “is about taking a look through the key hole of a locked door, where an unlikely female pair walks between friendship and a disastrous affair.

It is set in a time prior to gay marriage passing, when a proper Irish woman is meant to get married to a man, have kids and push aside the unfamiliar, unrequited  feelings that may not fit into the mold. What interests me about Devil’s Dance is the polite teasing exchanges between these dynamic characters that tap into the temptations of what remains unsaid between them. ”

Sanz describes herself as “ecstatic” have the play in GayFest!, which to her is “a unique festival for Philadelphia that focuses on GLBTQ themes, allowing me the freedom to explore the lesbian themes in my play in a supportive environment.” When she speaks of seeing the festival’s famous banners (a familiar August sight in Philadelphia), she could be speaking for not only the participants in GayFest! but for its audiences as well: “I have never been prouder to walk through the Philadelphia Gayborhood,” she smiles, “cross the rainbow painted street, and look up and see the GayFest! flag flying and know that I am a part of this festival and community.