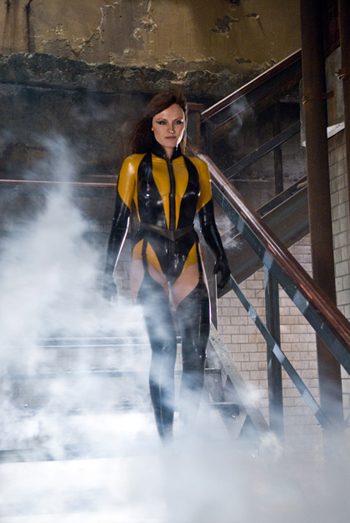 One of the most anticipated movies of this year, Watchmen is not to be missed.

Taking place in an alternate universe, where the United States has won the Vietnam War, and Nixon is president for his third term in a row, Watchmen digs into the American psyche but leaves a lot of questions.

The film, simply put, is a murder mystery: Who killed the Comedian? But what develops over the course of nearly three hours is a look at the American hero through the ages, from the golden age of comics in the ’30s and ’40s (including lesbian hero, Silhouette, seen for a few brief moments) to present day 1985, in which the Keene Act has outlawed masked vigilantism at the urging of the public.

No longer seen as beacons of justice, costumed heroes are an endangered species. Some retired (Laurie Jupiter aka Silk Spectre II and Dan Dreiberg aka Nite Owl II). Some continued about their business and ended up in prison (Walter Kovacs aka Rorschach). Others became special ops for the government (Jon Osterman aka Dr. Manhattan and Edward Blake aka the Comedian).

It opens with the murder of the Comedian (Jeffrey Dean Morgan) who, we find out through flashbacks, is a rapist, murderer, assassin, a government agent and, along with Dr. Manhattan (Billy Crudup), helped the United States win the Vietnam War. What follows is the rest of the disbanded vigilantes trying to find out who murdered him and why. In the meantime the United States and the Soviet Union are on the verge of nuclear war, which inches closer and closer as the tension rises.

As the heroes unravel the mystery we learn a little of their back-history, though much of it is glazed over. Most of the focus goes to the more intriguing characters, Dr. Manhattan and Rorschach (Jackie Earle Haley) while Malin Ackerman’s Silk Spectre (who was developed fairly well in the graphic novel and around whom much of the story revolved) and Patrick Wilson’s Nite Owl are almost accent characters. And there’s almost no development for Adrian Veidt aka Ozymandias (Matthew Goode).

But fangirls of the graphic novel will be happy that the film stays as true to its roots as it possibly can. Sometimes a little too true, in fact. The film is a bloody mess, literally. There is gore everywhere and in bright color. And at times feels like you’re watching a bunch of music videos in a row (though I’m not going to knock the homage to Apacolypse Now). Also, expect a lot of director Zack Snyder’s signature slow motion, a short soft-core porn scene and a giant naked blue man. One thing I do take particular issue with is the changed ending. Apparently it’s OK to have two hours of bloody violence and murder (not to mention unspeakable acts against women and children), but it’s not OK to show dead New Yorkers. I blame post-9/11 censorship.

A well-acted film that will leave you thinking, Watchmen is definitely the comic book film to see this year.