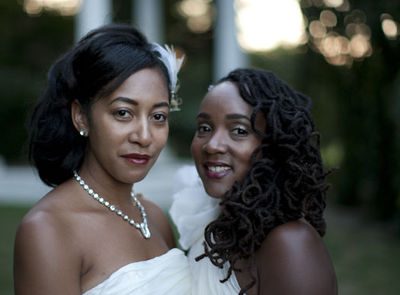 Aisha and Danielle Moodie-Mills were featured in 2015 in Curve in “The Two of Us” as a black lesbian power couple to watch, and to listen to! Since that time they have gone from strength to strength. The media first sat up and took notice of this gorgeous and brilliant pair of media commentators and activists when their glamorous wedding became the first same-sex marriage to be featured on Essence.com.

Since then, the Moodie-Mills have joined the fight for LGBT marriage across the U.S., especially on the East Coast, from their home base of Washington, D.C. to New York City.

Together, they are smashing stereotypes of what power looks like, pushing beyond the lavender ceiling and fighting for equality for all. Recently, Aisha Moodie-Mills was named as one of the OUT100, which is a highly-selective annual list of the most influential people in the LGBT community, as curated by OUT Magazine editors. Now, the Moodie-Mills are the focus of a new two-part mini documentary with legendary American railroad corporation, Amtrak.

In the Amtrak style video the power couple opens up about their influence in the LGBT community both separately and together: Danielle is the creator of BLIS.FM’s most downloaded show, “Politini,” and CEO of Politini Media, a communications and media strategy firm specializing in content creation and development for those seeking to engage with the New American Majority. Aisha is the President and CEO of the Gay & Lesbian Victory Fund and Institute, and is becoming a force in activism and public speaking in NYC.

On the night of the OUT100 Gala, Aisha was at the Rockwood Leadership Institute furthering their advocacy for LGBT rights. Danielle was honored to represent her wife at the gala and she allowed Amtrak to document her journey aboard the Northeast Regional Rail en route to New York for the annual OUT100 Gala. Check out her journey below and be sure to book your tickets here.