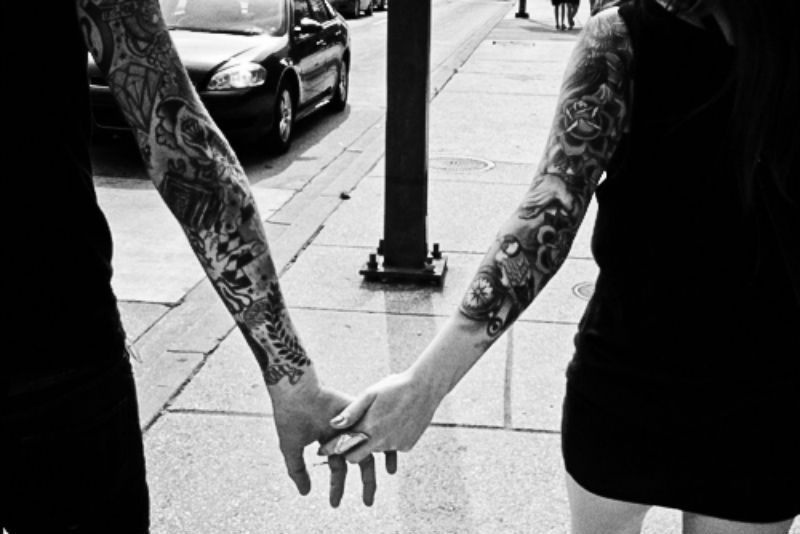 I drove around Jake’s block three times, stalling until my little queer heart didn’t feel like it was going to fall out of my little queer ass. I was on my way to Jake’s house for a sex date – my first sex date with a straight cis-man* after nine years of dating cis-women.

It wasn’t that I had never slept with a cis-man before – I had! Penises aren’t that hard to operate, I kept telling myself as I rounded his block just one more time, they’re just out there, ready to go! Right? Finally, I texted him, idling my car in his driveway. “I’m nervous”. My phone buzzed. “Yeah, so am I”. I smirked and put the car in park.

We did quite alright that night and I now find myself not only sleeping regularly with a cis-man but dating one. I’ve never identified as straight and still don’t. The more I move through this world as a queer woman dating a straight, cis-man, the more others like me come out of the sexually fluid closet.

We swap stories of nerve-wracking penis-pleasing attempts, of heartbreaking rejection by former queer lovers, and of the struggle to maintain a queer identity alongside a penis-and-vagina sex life.

Cunnlingus and blow-jobs are pretty much the same.

I think I’m pregnant. All the time.

After a blissful 9 years without having to foil sperms’ plans to reach my eggs, I spend every single month of my cis-man-sex-life convinced that I’m pregnant. In the five months I’ve been dating my cis-boyfriend, I’ve taken just as many negative pregnancy tests, despite our religious condom-use. It takes some getting used to.

This rule applies to all, but when queer people want to have sex with non-queer people, it’s especially important. Make sure you’re sharing your bed with someone who shares your sensibilities – that they respect your pronouns, identifiers, and sexual practices and preferences. Just because you’re having “straight sex” doesn’t mean the sex you’re having needs to be heteronormative, traditional, or gender-role defined.

Demand to be seen.

The thing about bisexual queerness is that it’s often socially determined by the body parts and gender identity of your partner. No matter how many times you repeat “I’m queer. I’m queer. I’m queer.” to yourself in your head, when you walk through life holding your cis-male partner’s hand, your attempts at making meaningful eye contact with the only other queer couple at the party are failed, or your boyfriend’s friends are left scratching their heads all “I dunno man, I think Patrick’s girlfriend might be gay”.

No matter who you date, half of your sexual identity is invisible. Get louder. Get prouder. Drop stories about your ex-wife and ex-girlfriend like little head-scratching bombs at every single straight-saturated party you attend with your cis-dude. No one affixes or erases your labels but you.

Stay brave. It can be easy to dwell on how hard we fought to be queer, how brave we had to be to come out and stay out. But who ever said being queer and partnered with cis-men was easy?

If your queer community is backing away, if you’re questioning your identity, and even when you’re about to give that first blow-job, just remember – us queer folk were built to break the mold and be brave, no matter who ends up in our bed.

*“Cis” is short for “cisgender” & comes from a Latin rootword meaning “of the same side”, denoting or relating to a person whose self-gender-identity conforms with the gender they were assigned at birth correspondingly to their anatomical sex; not transgender.