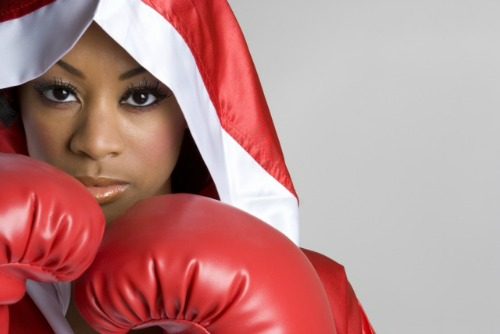 Put in your mouth guards, it’s time to learn the rules for fighting fair with your favorite sparring partner.

For some, love really is a battlefield. Some of us mistake the drama of a yelling match for passionate love. While this worn-out page from the Whitney Houston-Bobby Brown book of love can seemingly breathe life into an otherwise dull existence, in the end it’s an inferno that will burn itself out.

Sure, the make-up sex is fantastic, but even that flicker will go out faster than a supermodel can whip a cell phone at her assistant’s head.

Don’t get me wrong. A little bit of conflict is a healthy and inevitable part of any relationship. The question is not if you two fight, but how that disagreement will play out. In the boxing ring, the referee is clear about what is unfair: biting, tripping, spitting, head butting, holding and throwing low blows. While in some circles these moves sound more like foreplay, when it comes to fair fighting, there are, in fact, some holds that should be barred.

Put in your mouth guards, ladies—it’s time to learn the rules for fighting fair with your favorite sparring partner.

Reacting in a blind rage, as if you’re on Jerry Springer with your cheating three-legged second cousin, is no way to engage in a good old-fashioned disagreement. Listen, discuss and be open to the fact that you may be wrong. Leave the chairs on the floor and the bodyguards out of the equation by keeping your head together. Let’s say, for example, you see your girlfriend kissing your best friend. The moment when you feel as if you may be morphing into a green Incredible Dyke is not the best time to broach the subject. There’s a reason why no one understood a word the Hulk uttered: In the heat of the moment, we lose the ability to speak our native tongue. Even boxers have to go to their corners every three minutes to get it together before moving on to the next round.

2. Leave the baggage behind, unless you plan to have your disagreement at the airport.

We all have past girlfriends who drove us crazy in a million ways—we have the battle scars to prove it. Contrary to what some women think, the purpose of life is not to make your current partner pay for your ex-lover’s mistakes. Not even the greenest of hippie girls would approve of recycling those old dramas, so let them go. If the two of you are arguing over who has the right to be inseminated and take maternity leave, it’s out of bounds for you to remind her of the fight you had three years ago over who would control the remote. Fight fair by letting bygones be bygones.

Your partner cannot read your mind and you cannot read hers. Do not assume that you know what she’s thinking, feeling or going to say. Equally, don’t assume that she intrinsically knows where you stand on an issue just by the clever way you’re pouting in her general direction. The important part of the battle is not just showing up, but also listening and not being afraid to speak what’s in your heart and mind. Sitting out the fight by clamming up isn’t taking the high road as much as it’s taking the “I’m too afraid to speak” backroad that dead-ends in the fiery crash of your good thing. Not communicating can be as much of an unfair fighting tactic as screaming incoherently for hours on end. A more quiet fight, but unfair nonetheless.

4. What you say is as important as how you say it.

Stick to the facts of the situation and how they feed your feelings. The simple fact that she stuck her tongue down your best friend’s throat made you feel as if you were valuing the relationship in a far different way than she had been. Calling each other names that would make even a sailor blush is also not considered fair fighting. Stick to discussing your own feelings, reactions and behaviors, rather than being accusatory, belittling and condescending to your partner. The words you swallow today will save you from having to grovel and apologize later. Nine out of 10 doctors agree, zero calories are ingested when you swallow your wrathful pride.

5. You must have an appropriate time and place to work on your issues.

If either or both of you are too tired, too drunk, too short on time, or the place is too crowded, then it is not the time to duke it out. Engaging in a tag-team grudge match where your friends and her friends get square in the middle of your business is not conducive to solving your problems. While it’s just peachy that Dr. Phil can jump in there to help couples fix things, in the end only they can kiss and make up. As for fighting while drinking, throw alcohol on a fire and see what happens. The flare-up will sear the hair from your arms and likely give a new meaning to the phrase “rekindling your romance.”

6. At all costs, you should both avoid violence.

That includes using threatening language, throwing objects or taking aggressive action that’s intended to inflict pain, fear or harm. Prison is not a day camp for lesbians, despite the impression that The L Word provided. Domestic violence should never be tolerated, regardless of the excuses that follow in its wake. According to endabuse.org, more than three women die every day as a result of domestic violence. If you are experiencing violence in your relationship, please call the National Domestic Violence Hotline at 800-799-SAFE or 800-787-3224 for TTY.

7. Most importantly, remember that you love each other.

Hopefully, you’re angry because you care about this person and want to work things out. Sorting it all out is not the same as “having your way” every time. Partner up and look at the issue as a problem to be solved together and not as a smackdown to be won at all costs. With these rules in mind, ladies, tap your kid gloves and come out fighting fair.