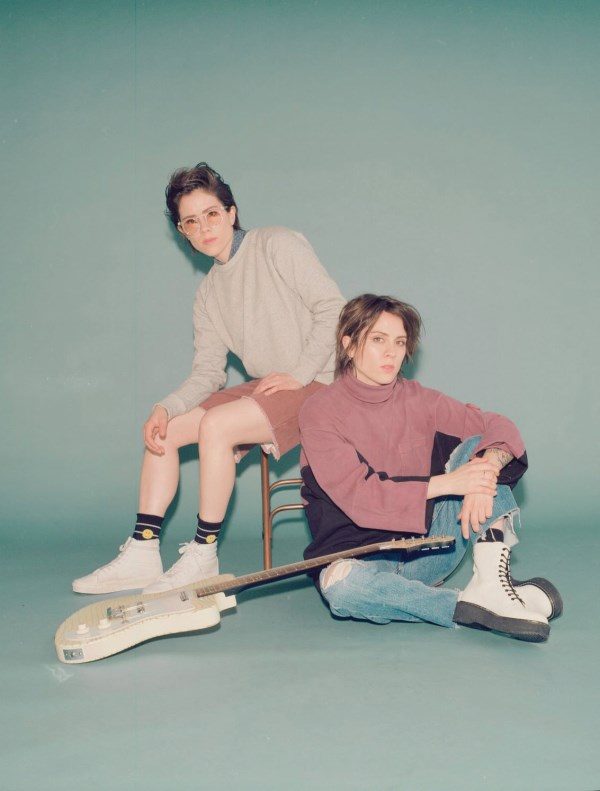 How Tegan and Sara visited the past and found their way to a bright creative future.

Tegan and Sara Quin, the Canadian twins who have been charming audiences worldwide for 20 years (and nine studio albums), have never stopped evolving.

After the career-changing success of their fifth album, The Con, and a two-record visit to the world of electro-pop, Love You to Death and Heartthrob, the sisters Quin managed to mine the past for a treasure trove of content that resulted in not only their first memoir, High School, but the studio album Hey, I’m Just Like You is a reimagining of songs Tegan and Sara wrote in, well, high school.

The guitar-driven album quite literally brings Tegan and Sara fans back to where it all began.

“Tegan and I finished touring our last album and both agreed that we wanted to pursue another creative endeavor that wasn’t just writing a new album, recording a new album, and touring the new album,” says Sara Quin when we recently caught up with her. “We had done that cycle for almost 20 years and we were both feeling really creative and excited, but we both wanted to direct that into something fresh, something that would challenge us, and we had sort of thrown the idea around about doing a book. It was a fun creative process to even arrive at that place, and writing the book itself was really wonderful.”

For Tegan and Sara fans and newcomers alike, High School provides a nostalgic trip down memory lane, chronicling the relatable ups and downs of being teens in the ’90s; the conflicted yet codependent relationship Tegan and Sara had before becoming Tegan and Sara; and their first steps toward becoming the iconic duo they are today. Written from alternating perspectives, the memoir is akin in tone to the compelling onstage banter they have become known for. Relatable, self-deprecating, and with a self-awareness that’s beyond the average teenager, High School stands alone as a compelling piece of work. The sisters approached the process of writing a memoir in much the same way as they approach writing music.

“We write in our own studios and homes for months on end before we actually come together and collaborate on the music or sequencing on our albums, and with the book we did a little bit of preliminary outlining simply because we didn’t want to spend too much time writing about the same stories,” Sara says. “We outlined those big marker moments and then disappeared into our own worlds for three or four months, to just write. In a way, I was writing my own book and Tegan was writing her own book, and then as we started to compile our chapters and create our first draft we started to go back and forth with them.”

Based on their three years of high school in Canada, each sister delves into her particular experiences with friendships, coming out, music, and the transition from playing guitar in the bedroom to making a real go of it in the music industry, in the pre-internet and pre-cell phone ’90s. While not every reader can look back on travelling the world as a professional musician, the book has a relatable tone that will invite all of us to reflect back on our own high school years.

“I think that for people who grew up in that era it’s sort of interesting to remember what their high school experience was like,” says Sara. “I’ve sort of spent my life looking for pieces of identity inside of things and relating to them. I really force the idea that even though I am a queer women writing about my queer experience as a young woman in high school in the ’90s, there should be something in there for everyone to relate to, no matter what your background is.”

For anyone, taking a deep dive into the past has the potential to be an uncomfortable yet gratifying experience, and for Tegan and Sara, who have until now primarily worked in the realm of music, the creative and emotional process was different for each of them.

“I think that both of us are artistic and creative and extremely rigorous and disciplined when it comes to self-evaluation and manifesting creative output,” Sara says. “I sort of look at myself and analyse myself, and I have a desire to create things that reflect that. I realised that there was quite a lot about our songwriting and storytelling that really naturally works in this medium, too. Both Tegan and I really enjoyed taking our skills at writing music and telling stories and performing on stage and using them to make something really different. I think the fact that we were able to write this book and accomplish it indicates that we both really enjoyed the process. I think to some degree that maybe I struggled a little more with the material and the emotions that came out in writing the book. I had a little harder time of it in high school than Tegan did, and I struggled, knowing from a very young age that my sexuality was different. I had a hard time integrating that without quietly, internally suffering a little bit for it. And because I ended up in relationships with women, girls, as a young person, I had to face that reality a little bit sooner than Tegan. So, that emotional struggle was more a part of my writing, whereas for Tegan it was a little bit lighter. We both loved writing the book and have plans to write more. Actually, we are in the process of working on another project right now.”

The inspiration for Hey, I’m Just Like You came about somewhat accidentally, as they had already started working on the next album before stumbling upon some old songs while looking for material for the book.

“We had been writing for quite a few months before we found the demos that we wrote in high school,” she says. “I didn’t listen to them for weeks because I just thought that they would be cringe-worthy. I would often work on the book in the library, and as I was coming home from the library one day I just put my headphones on and played the songs, and I was extremely moved. It was quite emotional to hear the music. I just thought to myself, specifically as a songwriter, that these were remarkable songs. Now I can hear past the rough recordings and the scratchy vocals and the simplicity of the playing. I can hear there were sophisticated ideas that we were already intuitively in touch with, and that’s what really inspired me.”

When Tegan and Sara’s music started to gain accolades, some were quick to assume that it was their status as identical twin sisters or their youth that gave them a niche appeal, not their talent. That narrative stuck with the women for years, and working on Hey, I’m Just Like You has finally given them another perspective on the origins of their success.

“I’ve had enough distance from the young version of myself that instead of cringing I felt deeply proud,” Sara says. “Like, no wonder recording-industry people were trying to sign us when we were in high school. I tell that story with a completely different slant now. I used to say, almost apologetically, like, ‘Yeah, people were interested in us in high school.’ I don’t want the narrative I read in the press—that people were interested in us when we were teenagers because we were marketable or cute. Now I feel really angry that I bought into that, because when I listened to the music, it’s fantastic. As women, as young women, we accepted that there was something that made us attractive to people and it was a thing we couldn’t control—what our bodies looked like, that we’re girls, that we’re twins, that we’re cute or whatever. Instead, I want to reclaim that narrative and say, ‘No, we were doing something really fantastic.’ At 17 years old we were writing songs that were really fantastic and people saw potential in that and it clearly worked out. I am trying to reclaim that narrative now—like, ‘Yeah, we were songwriters even back then.’ ” The 12-track album is a thrilling offering, with windows-down rockers like “I’ll Be Back Someday,” and the introspective “Call It Off”-reminiscent ballad “Hello I’m Right Here,” and the brooding “Don’t Believe the Things They Tell You (They Lie).” Their status as seasoned musicians is apparent in the reimagined tracks, taking the earliest songs of their career and giving them a modern spin while staying true to their original essence.

“Even when I was looking at the lyrics, for example, I was like, ‘We’re not going to just change the song.’ For example, in “Hey I’m Just Like You,” Tegan and I were talking about our friendship with our friends and each other, and it was the first song I wrote on the electric guitar, and I was still taking a lot of drugs and having adventures with my friends, and everything was crazy. I was like, ‘This song needs to stay there.’ I can’t just take the melodies and write something totally different. We really try to honor each song,” Sara says.

When asked how their relationship has evolved after working so closely for so many years, Sara is quick to acknowledge the complexity of their dynamic, but says she is ultimately grateful to have such a close bond.

“I think Tegan and I are good at what we do,” she says. “We are strong partners and strong collaborators. We know how to run a business and we know how to balance each other, and we also drive each other crazy. I’m proud to admit that we no longer wrestle or throw punches or say horribly scarring things to each other,” she says. “I think we have found a way to take our criticism and tension and difficulties and try to channel that into productive things. We feel really proud of the fact that we have managed to stay in a band, and in some ways really enjoy each other again.”

From enjoying the artists’ quirky onstage banter to identifying with their music, fans around the world will no doubt be interested to gain access to another facet of their lives and talents.

“When we found the videotapes, it was so fascinating to see the two of us so affectionate. We were best friends, we adored each other, we loved each other, we were inseparable, and we wanted to be around each other all the time. We were always in each other’s room and jamming and playing, and we were also at each other’s throats, and it was good to know that love can coexist with something a little bit darker—maybe that makes us more interesting.”