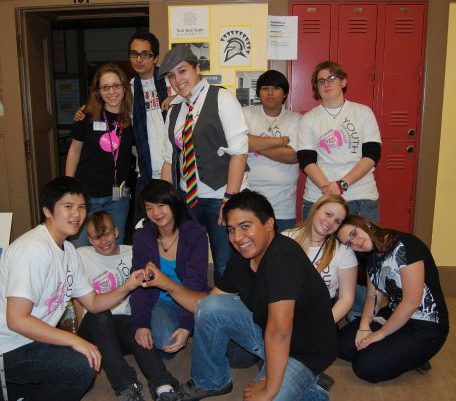 For 10 years GSA Network has been working to fight homophobia in schools, but it’s the youth who are leading the way.

“It was really different back in the 1950s.” Phyllis Lyon’s words echoed around the auditorium where more than 400 middle and high school students sat listening to her talk about moving to the Castro district of San Francisco with her late wife Del Martin in 1955 and founding the Daughters of Bilitis.

She recounted getting a phone call from one of the few lesbians the pair had met. “Do you want to come to a meeting?” the woman had asked. “A few of us want to start a secret lesbian society,” Lyon stage whispered, at which the crowd of teens went wild with cheers and applause. “And you can imagine what we said,” Lyon joked. The students in attendance understood the importance of having clubs because they were all members of their schools’ gay-straight alliance.

Along with California State Assembly member Tom Ammiano, Lyon was a keynote speaker at the GSA Network’s third annual Youth Empowerment Summit, held on Dec. 6 at Everett Middle School in San Francisco. The GSA Network is a nonprofit organization that provides support for gay-straight alliances in schools across California and nationwide.

While not directly affiliated with the middle and high schools they work to improve, the GSA Network provides training and resources for students and teachers that are part of gay-straight alliances. They encourage young people to confront the homophobia and discrimination they come up against every day at school. The students and teachers at the Youth Empowerment Summit all said that the biggest problem in schools is slurs, but there are also many schools struggling with hate crimes and more violent types of discrimination.

Youth hold leadership positions within GSA Netwrok, including seats on the board of directors, and play significant roles in organizing the programs and events put on by the organization, like the Youth Empowerment Summit. “GSA Network believes so fundamentally in the idea of youth leadership for a couple of reasons,” says Carolyn Laub, executive director of GSA Network.

“One is that young people respond to other youth leaders. They get inspired by seeing their own peers at the front of the classroom, leading the training or the workshop. Also we think it’s important that young people learn those leadership roles because they’re not only exercising leadership now, creating change in their schools, fighting homophobia and transphobia and other social injustices, but they also become the leaders of our broader movement to fight for social justice.”

One such youth leader is Kris Hameister, who is a member of the GSA Network’s youth council and part of their training committee. “I think it’s really important for youth to lead themselves because as we mature and grow up, we have to know how to organize ourselves. Adults aren’t always going to be there to help us sort through what we need to do and help us set our initiatives,” Hameister said. “We decide what we need to get done, we decide how we’re going to do it, we decided who’s doing what, we form committees. Once we get that basic still set, there’s really nothing we can’t do as far as activism.”

There is a certainly reason to believe that youth is the future, and Laub has confidence that their resilience and enthusiasm will serve them, and the rest of society, in good stead. “If you look at…conservative parts of California, what we find is that GSA clubs are often, and almost always, the only LGBT organization in their entire city or town.

So, often…it’s young people who are coming out, taking risks and having the courage to lead their community and to change the hearts and minds of people. And that’s how we’re ultimately going to win on a future ballot initiative.”