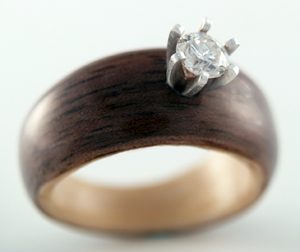 Don’t want to wear a conflict diamond? Here’s a guide to a number of equally attractive alternatives.

Numerous brides today, along with their partners, are opting for alternatives to the traditional diamond engagement ring for a multitude of reasons.  Movies, like Blood Diamond, books and news media have brought the issue of conflict (blood) diamonds to the mainstream.   Many couples do not wish to celebrate their engagement with diamonds that reached their jeweler via unethical practices. For others, several months salary can be spent in better ways. Some just want to be different and break free from tradition.  As a result, they choose a ring that celebrates the individuality of their relationship and one that stands out from the norm.  Ultimately, the most important thing in an engagement ring is its symbolism and what it means to you.  For many, an engagement ring doesn’t have to be a diamond ring.

There are several symbolic choices that are both unique and less expensive. A great stand-in for the diamond is a precious gemstone such as a ruby, blue sapphire or emerald. Even the English Royal Family has selected precious gemstones such as these in lieu of the diamond.  The Queen Mother, Princess Diana and Princess Anne all received blue sapphire engagement rings, while Sarah Ferguson chose a ruby ring. Rubies, sapphires and emeralds, members of the gem group known as corundum, are very durable with a rating of 9 on the Mohs’ hardness scale for gemstones. The diamond is the hardest gem with a rating of 10.

Another factor, outside of beauty, to consider when shopping for a ring is the gemstone’s historical meaning. A red stone, such as the ruby or red garnet is symbolically linked to the heart, passion and romantic love. A blue stone represents spirituality and purity. Excellent choices include sapphire, blue tourmaline or blue topaz. For a ring that represents faithfulness and continuity, go for an emerald, green garnet or green tourmaline.

For those who want to stick with a clear stone, yet are looking for an alternative to the natural diamond, one can obtain a synthetic diamond for a significantly lower price. In the gem world, there are two types of lab created gems—synthetics and simulants. Synthetics contain the same chemical makeup of their natural counterparts such as the synthetic diamond. This is an attractive solution for those who want a diamond but also want the moral satisfaction that their diamond is conflict free. One caveat is that, due to limitations for growth, stones over one carat can not be obtained.

Simulants are created to resemble natural gems. Cubic zirconia is a well-known simulant replacement for diamonds. It is available for perhaps the lowest cost, yet many can tell that it is not real and there is a stigma attached that such a ring is cheap or fake. In addition, it often turns cloudy over time and is easily scratched or damaged.

Another beautiful stone on the market is Moissanite, a lab created gem made from small quantities of a naturally occurring mineral believed to have been brought to Earth in a meteorite 50,000 years ago. It was first found in the late 1800s by Dr. Ferdinand Moissan in a fallen meteorite in an Arizona canyon and identified as a new mineral, silicon carbide. Moissanite is the second hardest gemstone with a hardness of 9.5. Indistinguishable from the diamond to the human eye, it appears so similar that most people, even jewelers, mistake it as such. Its luster, fire and brilliance, factors one looks for when shopping for a diamond, rate higher than the diamond itself. Moissanite is not inexpensive, but can be bought for a fraction of its diamond equivalent. One downside is that it can sometimes take on a yellow/green tint in certain lighting—particularly natural light with overcast sky. Currently, the stone is under patent and manufactured by only one company, Charles & Colvard.

Some final choices include rings made with other semi-precious gemstones such as aquamarine, quartz, onyx, tourmaline, amethyst or topaz. If you are seeking a natural, yet less expensive clear stone, white sapphires or white topaz are also alternatives, though it has been reported that white sapphires in particular can turn cloudy with time due to the fact that natural white sapphire contains faint hints of gray or color. In addition, a pearl ring or just a band with an unusual design or engraving is equally as meaningful.

If after researching all your options, you still have your heart set on a natural diamond, but are concerned with the ethics, you can opt for a conflict free diamond. Conflict diamonds refer to the diamond trade that has fueled civil wars, engaged in human rights abuses, employed child labor and funded terrorist organizations. Many experts warn, however, that one can never truly be sure that a diamond was ethically mined since the diamonds often pass through so many hands and countries before they reach the store. Unfortunately, this can also be the case for other precious gemstones including rubies, sapphires and emeralds, as these stones may be mined in conflict areas as well.  Purchasing a Canadian diamond ensures that it has been mined under strict ethical and industry standards. Local jewelry stores may also offer diamonds that have been certified to be conflict free. Just be sure to ask for the certificate showing that is has been independently tracked from the country and individual mine of origin.

In the end, only you and your partner know what makes you happy and reflects your relationship best. Happy shopping!