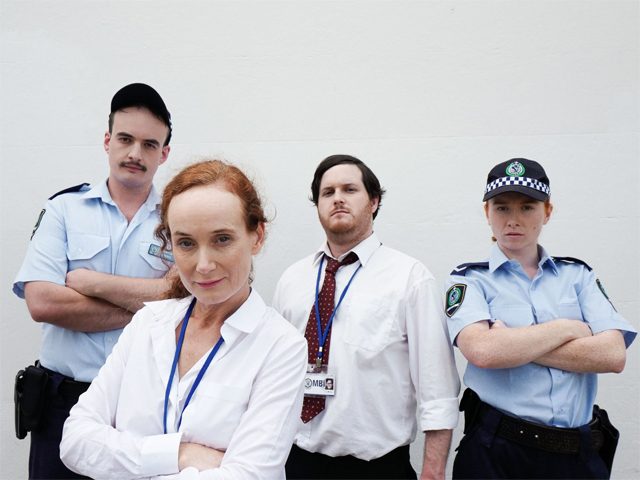 Without a Tracey is a story about a town, a murder, multiple keep cups, secrets, and the lengths we go to in order to protect the ones we love.

Set against the stunning backdrop of the Blue Mountains in rural Australia, Without a Tracey is a bold new series that defies genre, subverts expectations, and tells the truth about who we are.

Without a Tracey is a groundbreaking queer Australian online series from writer and director Alex Culliver and producer Chelsea Thistlewaite.

Newly retired ex-cop Tracey Kimmel is enjoying the serenity of her morning lakeside run when she discovers the body of local teenage
boy Petey Nichols. Not awarded best cop in the town for nothing – Tracey’s instincts tell her this is no accident. She immediately informs Police Chief Mitch and his deputy Robbo Robertson about her grisly find, and returns to her newfound retirement – she has her family to focus on.

But things aren’t right at home, either. Tracey’s teenage son, Mikey, is quieter than usual, and Tracey’s wife Cindy can see that Tracey is more concerned about the case than what’s happening in their own home. But Cindy knows Tracey better than Tracey knows herself, and isn’t surprised when Tracey makes a late night trip to the police station to take on the case.

The next morning Tracey is stunned to see her own son, Mikey, brought in for questioning over Petey’s death. Tracey informs Petey’s parents that Petey’s death was likely foul play, and meets a gruff and dismissive man in the form of Petey’s dad, Sean Nichols. Cindy meets Mitch at the Police Station to reveal what she knows: Petey and Mikey were in a romantic relationship, and Mikey is completely terrified of being outed by this investigation.

Cindy urges Mitch to keep an eye on Mikey – he’s his son too. In questioning, Robbo encourages Mikey to open up about his sexuality. In flashback, it is revealed somebody was watching Mikey and Petey kissing behind the school toilet block.

At a local cricket match, Tracey meets with Petey’s mother, Kate. Terrified, she confesses that Sean killed Petey, that he’s a known homophobe and Tracey’s life is in danger as a gay woman. Tracey informs Mitch immediately, but it’s not enough to make an arrest, they need more. Tracey races to the only person who knows the whole truth, Mikey.

Tearfully Mikey reveals that he saw Petey the night that he died, that Petey fled his house after Sean confronted him and sought refuge with Mikey. Terrified at revealing his sexuality, Mikey turned Petey away, leaving him to be found by Sean. Tracey knows the truth, and sees her son for the first time as a young gay man. She heads to the Nichols house to make the arrest, stopping for petrol on the way, and runs into Sean. Back at the house, Mitch and Robbo arrive looking for Tracey. Confused, Cindy thought she was with them.

For the first time, the Kimmel family and the police force are, Without a Tracey