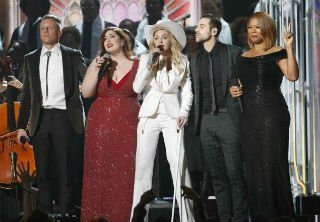 A grand and most pivotal moment in history when rapper Macklemore and producer Ryan Lewis let loose the song that said all that the LGBTI communities all over the world had been crying out for so long. Same Love the anthem for Marriage Equality was met with vocals by Mary Lambert and Madonna mashing it up with Open Your Heart.

I couldn’t imagine a better wedding myself : Queen Latifah  (officiator), Madonna (wedding singer), Beyonce (one of many distinguished guests), before the eyes of the world

Oh and not to mention, throwing the bouquet to a giddy Katy Perry! The 56th Annual Grammy Awards was this very dream for the 33 couples who declared their love for each other in a joined, public ceremony of marriage.

‘Congrats to all the #samelove couples tonight. You had me in tears of joy for y’all! Also… Look who caught the bouquet!!! #okuuuurrrr.’

With the veil over our eyes

We turn our back on the cause

Till the day that my uncles can be united by law

And a certificate on paper isn’t gonna solve it all

But it’s a damn good place to start

No law is gonna change us

We have to change us

Whatever God you believe in

We come from the same one

Strip away the fear

Underneath it’s all the same love

I couldn’t help but to think of all the people living in countries where they can be legally tortured, jailed, raped and murdered for their sexual orientation, for expressing their “Same Love” who shed tears of joy, watching this video in their secret hiding places in the dark.