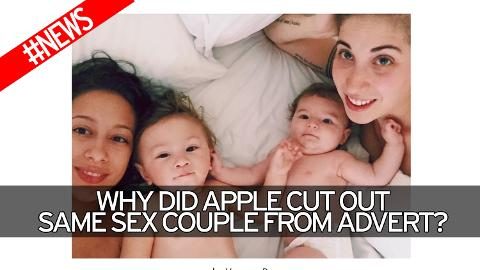 Apple has removed an image of a same-sex couple with their two children from its Mother’s Day advertising in France, Germany, Italy, Japan, South Korea and Turkey.

The tech company initially posted the Shot on iPhone – Mother’s Day video to its American YouTube page on 1 May. The video featured a number of photographs and videos showing mothers with their children and was pulled from Apple user’s social media pages.

The 30-second ad that played in the US, Australia, Canada and Mexico included an image of Melanie and Vanessa Roy in bed with their two children, Jax Izzo and Ero Kix. The couple regularly share pictures of their children on Instagram and write about their experiences as same-sex parents at their blog mommy-squared.

But the image of the same-sex family was removed from the version of the ad that was shown in other countries. It was replaced with an image of Melanie Roy holding Ero Kix, without her wife or other child. The altered version of the ad also replaces the opening image of a pregnant woman surrounded by children credited to Truman P with a monochrome image of a pregnant woman credited to Ryan B.

The changes were first noticed by the French publication Jeanne Magazine and have now drawn criticism by international audiences.

Apple has a history of editing its ads for different markets based on perceived cultural sensibilities, with an original version and an “international” one. One recent example was the American and French version of the Apple Watch Date ad featured tattoos, which were edited out for the Japanese version.

Apple has been condemned for editing their Mother’s Day ad due to their record on LGBT rights. Apple’s Chief Executive Tim Cook is openly gay and has spoken out in favour of marriage equality, while the company has publicly supported same-sex marriage.

This is not the first time a same-sex couple has been erased from an advertisement. In January of this year, Toyota removed a female couple from an ad who were present in the Italian version. In 2014, an advertisement for Coca-Cola initially showed a same-sex wedding but later changed it to show a heterosexual wedding in the Irish version.