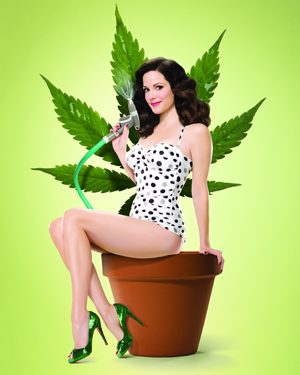 Not a fan already? We’ve got 10 good reasons you should be.

After what seems like far too long Weeds is returning for its sixth season this month. And we are excited to present the first episode here at curvemag.com when it premieres on Aug. 17.

Having just wrapped (rolled?) its fifth season with the mother of all cliffhangers, Showtime has announced that its Golden Globe winning show Weeds is coming back for—but not before you’ll have a chance to beg, borrow, or steal the DVDs (we don’t really recommend that last one) and get yourself caught up on one of the most wonderfully dysfunctional comedies on cable. With the stock market in crisis, our right to marriage in peril and the world on the brink of a different nastiness every day, it could be just the escapist fix your funny bone needs. Here are 10 reasons why you should be addicted to Weeds.

In her comic strip Dykes to Watch Out For, cartoonist Alison Bechdel lays down the criteria for movies (or in this case a TV show) worth watching. They are as follows: It has to have at least two women (check) who talk to each other (check) about something besides a man (check – great! Now go set your TiVo).

No doubt about it, the women of Agrestic are getting busy, even though they may not be playing on our team. All too often, women owning their sexuality are portrayed negatively or with dire consequences, but on Weeds the women are on top—figuratively and often literally as well.

Before Brooke Smith (aka Dr. Erica Hahn) made out in the elevator with Dr. Callie Torres on Grey’s Anatomy, she lent her talents and her special brand of sardonic sexiness to Weeds as Valerie Scottson, the former wife of one of Nancy’s ill-advised love interests. Sadly, there is no “playing doctor” with Nancy.

Even though it deals with some pretty heavy issues, including racism, illegal immigration, classism, and gang violence, Weeds never fails to make you laugh—often many, many times each episode. Just when you think the drama-esque grittiness is going too far, the writers swoop in with a hysterical—and often unexpected—comedic save.

In the gated community of Agrestic it’s the ladies who wear the pants. While the cast is coed, all the strongest roles are played by women. Nancy is the matriarch of the suburban drug trade; think a nonviolent Tony Montana in heels. However, she is not the token iron-willed lady, and all of the other female characters are strong and independent in their own right. This is not Betty Friedan’s suburbia.

Actor, singer and all around hottie Zooey Deschanel (The Hitchhiker’s Guide to the Galaxy) guest stars as the occasionally homicidal and charmingly psychotic Kat, who—with Inuit bounty hunter Abumchuk in tow—shows up on Nancy’s doorstep looking for Nancy’s brother-in-law, Andy. While Andy is a no-go, she does manage to steal his van, Shane (Nancy’s youngest son) and our hearts all in the course of four episodes. Not since your crazy first girlfriend has a complete disconnect from reality ever been quite so tempting.

This ain’t a show for right wingers—whether it’s Nancy trading in her suburbianesque SUV for a hybrid, Andy railing against the Iraq war or even its progressive attitude toward gay and lesbian characters, Weeds is never preachy, but expertly skewers everything that’s wrong about the right. And season four’s immigration sub-plot is guaranteed to make Lou Dobbs’ head explode. We don’t know about you, but that sounds like a good thing to us.

Embodying all that is evil and soulless about suburbia, Celia Hodes—played by the beautifully WASP-y Elizabeth Perkins (If These Walls Could Talk 2)—manages to be infinitely likable and simultaneously despicable. Always a scene-stealer and equal opportunity offender, Celia has made it her personal mission to make Nancy’s life as hard as possible. Whether this obsession springs from hatred or latent lady lust remains to be seen, but with all the sexual tension (albeit one-sided) we’re leaning towards lust.

Played by very talented newcomer Allie Grant, Isabelle is Celia’s youngest daughter, and while she may be just a kid, this “tween” could teach The L Word a thing or two about lesbian role models. Totally comfortable with her sexuality, this sassy, openly gay Junior High student holds her own against her domineering mother while building up child-star capital as the spokesperson for “Huskaroos,” a plus sized clothing line for children. “They’re just roomier!”

Mary-Louise Parker plays the role of Nancy Botwin, the suburban pot dealing über-MILF. Most of us fell for MLP as Ruth in the lesbian fave Fried Green Tomatoes, but for those of you who were not completely sold on Ms. Parker get ready to fall in love. Nancy is smart, tough, acerbically funny and, with her big soulful brown eyes, wickedly sexy. Following the sudden, unexpected death of her husband, Nancy turns to peddling pot to support her family. As she delves deeper into her new vocation, life quickly becomes darker and more complicated. But whether she is taking on PTA moms or learning how to “drive by” in her Prius, Nancy never loses her cool. Whatever she’s selling, we’re buying!