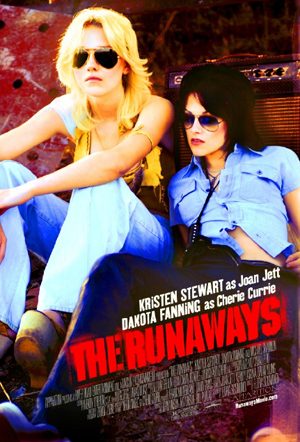 Standing backstage with Joan Jett at San Diego Gay Pride some years back I couldn’t help but ask why she avoids talking about her sexuality. She said she doesn’t and walked away.

So I was curious to see if The Runaways, which she executive produced, would allude to the topic that over the years she made clear is nobody’s business. It does.

I attended a benefit screening of The Runaways earlier this week in Los Angeles for Equality California, the group that has helped implement 63 pieces of legislation that are important to LGBT citizens.

The film is a bloodied Valentine of sorts, a peak at what went down when a group of 15 and 16 year old girls formed the Runaways in the 1970s. The group stuck around only a few short years but long enough to forge a path that enticed girl rockers from L7 and Hole to the Donnas, and will likely inspire more now that their music is out there again.

Playing these characters must have been freeing for Dakota Fanning and Kristen Stewart, last year’s darlings of the dark from Twilight: New Moon.

Fanning ditched the little girl dimples for garish stage makeup and all the drugs, sex and rock and roll a riot grrrl could handle. Meanwhile, Stewart channels that moody angst she’s known for as Bella in New Moon into rock’s most famous gritty bad girl, Joan Jett, where it really resonates.

In fact, Stewart’s obvious annoyance/frustration/exasperation with fame or fans or people butting into her personal life is rather Joan Jett-esque.

The film makes clear how the group’s rise to fame nearly killed Cherie Currie (Fanning) but brought life to Joan Jett. It’s been reported that both Jett and Currie kept it real by offering advice on the set, so if she didn’t actually say rock ’n’ roll saved her life she probably believes it.

That’s why Jett’s attitude finally makes sense to me, because only one thing in her life truly mattered and that’s the music. Whether it’s chicks or dudes in her mind is obnoxious and unimportant because music is her passion and her one true love.

Stewart is only 19 and pours out the Joan Jett attitude pretty well, with a few shots of vulnerability thrown in. Jett probably had that at one time, but by the time I met her in the 1990s, vulnerability was not one of her obvious traits. Try to mention some cookie-cutter crowd-pleaser of the moment to Jett and it only pisses her off. Rock is sacred and in her opinion, only a few do it well.

The way Fanning filled Cherie’s platform shoes opens a whole new door for her. Wait until casting directors get a load of her wasted rocker chick, in black panties and lacy corset.

The film reminded me how much I loved rock and roll as a kid. Joan Jett was part of that. She was an empowering force before I even knew what that meant. Her sexuality was irrelevant; I idolized her either way.

Joan Jett was the rock chick, a role model calling out in that anthem “I Love Rock and Roll” that girls can lead, let out anger, angst and emotion. In the film, Joan ignores the woman behind the counter who says, “the girl’s section is over there,” nor does she listen to the guy who says, “girls don’t play electric guitar.” She did what she believed and in music she found her voice. Interesting how well Kristen Stewart embraces these qualities as well. I suspect that this role has put her a little closer to her own voice.

Joan Jett was an icon of emotional revolt for me, and maybe rock ’n’ roll was her own personal revolt.

Regardless, she’s still living it, and we’re still singing along…come and take some time and dance with me!