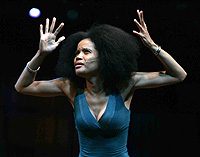 This Broadway veteran gets lyrical with her rapid-fire slam poetry performance.

For anyone who doubts that a diminutive, 110-pound pixie of an individual can carry a one-woman show, you obviously haven’t seen Staceyann Chin’s solo performance Border/Clash: A Litany of Desires. Or, more importantly, heard her slamming poetry lines with such artillery fire rapidity and precision, you’d think the special effects team was doing a stage trick with her mic.

No stranger to the spotlight, the 30-year-old Broadway veteran has a lengthy resume that includes countless national slam poetry titles and stage performances, largely thanks to being fed a steady diet of crisis and curiosity since she was a child in Jamaica.

“[My past] very clearly and very brutally affects who I am. In a very good way,” Chin says matter-of-factly. “It’s made me ask myself very hard questions, and it’s made me be comfortable with who I am on a level that maybe people aren’t.”

Border/Clash is unabashedly autobiographical, documenting Chin’s childhood as a half-Chinese, half-black girl growing up in Jamaica within a strained family structure and a homophobic cultural climate, then her subsequent move to Brooklyn. Her tales of abandonment and rejection catch you off guard in that, though set in an exotic locale under extreme circumstances, they are stories that anyone who had a challenging upbringing can relate to. Her performance is intense, brutal, and often times hilarious. Chin confronts the undeniable fact that she doesn’t necessarily belong to any one specific place due to her mixed background—and thus embraces it.

Every night that Chin climbs onto the stage, she is once again wide-eyed and wounded, her feet bare and her dark, coarse hair ’froed out to half-an-arm’s length. She is thriving as a woman who wants to be heard, tearing against the proverbial and invisible borders that have restrained her in the past and somehow cage us all. Except this time, on the stage with mic in hand, it’s done entirely on her turf.